Tokyo: Nicola McDermott said she felt peace as she launched her Olympic high jump campaign knowing she was channelling God’s work and relied on scripture to help her.

Eleanor Patterson did what she did knowing in her head she was ready and deserved to be in the final. 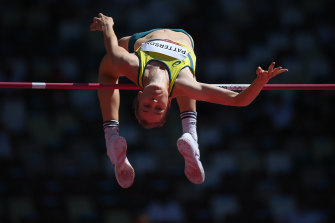 Eleanor Patterson in the women’s high jump qualifying round on Thursday. Credit:Getty Images

Australia’s women high jumpers breezed through qualifying and are now through to the finals on Saturday night, carrying the hopes and expectations that both are comfortably in medal contention.

McDermott, the national record holder, and Patterson the Commonwealth Games gold medallist whom she took the record from, both qualified without a misstep, hitting each height at first attempt.

Both looked untroubled sailing over the 1.95m qualifying mark.

McDermott became the first Australian woman to break 2.0 metres earlier this year then broke her own record when she went a smidgen higher, re-setting the record at 2.01m.

At her first major championships meet, the 2017 worlds in London, she didn’t register a height. The next year at the Commonwealth Games she set her opening height at 1.80m, higher than she had failed to hit in London. 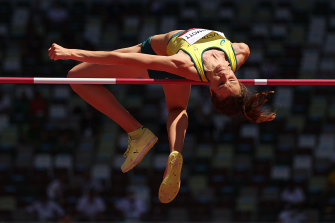 Nicola McDermott competes in the women’s high jump qualifying round on Thursday.Credit:Getty Images

“I set the bar to 1.80 and said ‘No I’m proving that today’. I proved that in 2018 to myself, it has already been convinced and sealed in myself and now I just get to jump out there.

“I can have expectations on me but they sort of – I am like a Teflon stick-free pan – it just falls off me because I do it for God, I don’t do it for myself. If I come last I am still a champion and I know that.

“I am like ‘come on board with me let’s see what happens’.”

McDermott, a devout Christian, said she was guided by scripture on Thursday, having read Corinthians chapter 1 in the morning.

“It says God uses the weak in order to shame the strong and the humble to actually be exalted […] all the time in my head I can say ‘I’m weak I’m not perfect – look at these girls they have got medals they have 2.06 personal bests, who am I?’ But I just think God can use someone like me who is always never considered for a medal and now this championship has come around and the hope of Australia is on me.

“If God can use me, then whatever I jump on the day, I have just got that peace. That really gave me a lot of peace out there.”

Patterson has overcome some injury concerns and has quietly snuck up on the Olympics in the shadow of McDermott’s efforts. Patterson is seriously world class and looking a more mature and confident athlete than the timid girl of Rio.

“I am so happy, honestly. It’s hot out there and slow going,” she said.

“I just went there to get the job done, I knew I deserved to be in that final, I have been jumping these heights – 1.95, 1.96 in the season so I knew it was definitely within my capabilities. I’m so happy.”

Patterson said she was ready after going to Europe to compete in the lead up to the Games and felt now in peak shape physically and mentally.

“I am hitting my straps now and I felt I had some very close attempts throughout the season in Europe at PBs and high heights so I am excited for what is to come.

“I only did one comp in the Australian season and I didn’t jump very high, I had done virtually one training session high jump wise. It was a gamble but similar to Europe but it paid off going to Europe and my body is in tip top shape and I am just excited and happy to be here.”

The US had a disappointing morning on the track with the men’s 4x100m team not qualifying for the final and the red-hot favourite for the men’s 110m hurdles, Grant Holloway, being beaten at the line for gold by Jamaica’s Hansle Parchment in one of the big upsets of the track.

Never miss a medal or great sporting moment with our Olympic update emailed daily. Sign up for our Sport newsletter here.