Sapporo: Making her Games debut at the age of 44, Sinead Diver has become just the second Australian woman to finish in the top 10 in an Olympic marathon. 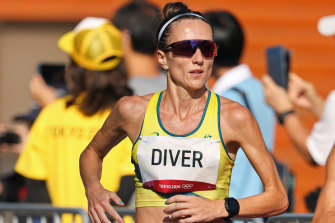 Sinead Diver finished strongly for 10th in the marathon.Credit:Getty Images

Diver, who was born and raised in Ireland before moving to Australia at the age of 25, stormed home in the closing stages on a hot and humid morning in Sapporo to finish 10th in two hours 31 minutes and 14 seconds.

The only better Olympic performances by an Australian female marathoner came from Lisa Ondieki, who claimed the silver medal at the 1984 Los Angeles Games and was seventh in 1988.

Until now better known as a two-time world half-marathon champion, Kepchirchir, 27, broke away from Kosgei with a couple of kilometres to run. 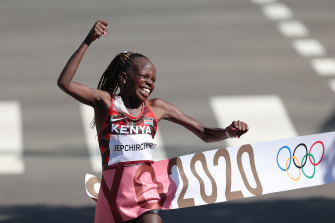 Diverv ewas delighted with her performance. She told Seven: “I’m speechless, I’m so happy. I didn’t expect to come top 10.

“That was something I really wanted before the race, so I’m absolutely stoked that I fought for that spot at the end.

“I gave it everything from about 32km. It’s still a long way to go and it’s really hot out there. I’m just so relieved that I was able to stay strong until the end.”

She sent a cheerio to her children, Eddie and Dara, and thanked her husband.

“I hope they are proud of their mum, I’m sure they are screaming at the TV now,” Diver said. “I want to say thank you to my husband, Colin, who supported me so much throughout this. He has taken on way more than his fair share of things, so I’m really grateful to him. I have so many people to thank, it’s ridiculous. I’ve been so lucky and so fortunate with everyone who has helped me out.”