Both athletes cleared 2.37 metres and had no failed attempts, but were both unable to clear 2.39.

After three failures each of the height, an Olympic official approached the duo and suggested a jump-off to decide the winner.

“Can we have two golds?” Barshim could be heard asking.

The official nodded, with the duo jumping into each other’s arms in celebration in heartwarming scenes.

The last time two athletes have shared gold was the Stockholm Games in 1912 in the pentathlon and decathlon. 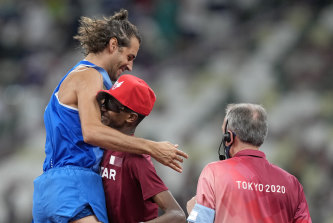 The two high jumpers first met in 2010 at a competition in Canada and have since regularly competed against one another. Credit:AP

The two high jumpers first met in 2010 at a competition in Canada and have since regularly competed against one another.

“I look at him, he looks at me, and we know it. We just look at each other and we know, that is it, it is done. There is no need,” Barshim said.

“He is one of my best friends, not only on the track, but outside the track. We work together. This is a dream come true. It is the true spirit, the sportsman spirit, and we are here delivering this message.”

The win was particularly significant for Tamberi, who was unable to compete at Rio in 2016 after breaking his ankle just days before the Games.

“After my injuries, I just wanted to come back, but now I have this gold, it’s incredible. I dreamed of this so many times,” he said.

“I was told in 2016 just before Rio there was a risk I wouldn’t be able to compete anymore. It’s been a long journey.”

American Shelby Mcewen who finished the event in 12th called it an example of “great sportsmanship.”

Tamberi was still beating his chest in front of cameras more than two hours after his victory, even after he had said goodbye to Barshim – the man he will now always be linked to in Olympic lore.

“I would never share it with somebody else,” he said.