Rohan Browning thought it was ugly. And painful. Sixth is such an unsatisfying result even if you are the first Australian man in 12 years to make the sprint final at a Commonwealth Games.

Australia’s fastest man struggled to put his race together in the final on a cool night in Birmingham running 10.20s, slower than the more composed 10.17 in the semi-final that got him there. 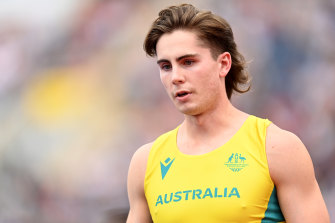 Rohan Browning after his sixth-place finish in Birmingham.Credit:Getty

“Not happy with it. Just an ugly painful kind of race. It’s one of those tough nights, it’s cold out here and at the risk of sounding like an NRL player – full credit to the guys who got on the podium,” Browning said.

“A month ago there is no way I saw myself in this final. I tried to take each win in my stride but once you are here you just want to be on that podium, that is what it is all about. I think I was sixth. Disappointed.

“The semi was not bad. I walked away from the semi I knew where I had to pick up at that 20m mark. I’ll have to watch footage back and see how this race came out. 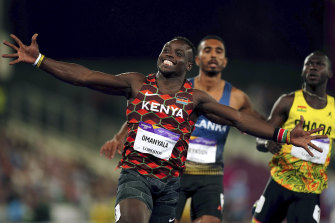 “I am heading in the right direction like I said a month ago I didn’t see myself in this final, I thought about packing it in after worlds and just getting back home and into some training for next year and I am glad I decided to persist. I think one of the lessons I have learned is persistence is so much more important than patience. You have just got to keep trying things and keep at it.

“Today there were a few things I could have done to be up there but I think I was bested today. I need more training in my legs and I need a big winter off-season.”

Browning’s form coming into the games was poor. He had barely raced during the year as he managed injuries then struggled at the world championships in Oregon, where he was run out in the heats in 10.22.

It was a pleasant surprise when he got to Birmingham and looked strong and confident in his heat, running 10.1. He backed that up in the semis but from an outside lane in the final could not keep his pace. He was slightly slower with each race.

“To be honest I have not had that much experience in running through three rounds,” Browning said. “We do it at Australian trials but I didn’t run them this year – I was injured. I haven’t got that much running in my legs and I think the three rounds might be something that challenged me. That is the nature of the sport, you want to be in peak shape for the finals so that is something I have to work on.”

Still, he is the first Australian male to make the Commonwealth Games sprint final since Aaron Rouge-Serret finished fifth in Delhi in 2010.

Matt Shirvington ran fourth at the Commonwealth Games in Kuala Lumpur in 1998, his 10.03s being the best performance by an Australian.

Browning was vying to become the first medallist since Mike Cleary in 1962 at the Empire and Commonwealth Games. John Treloar is the only Australian to win the sprint gold at the games in 1950 when it was the Empire Games.

It was not to be. 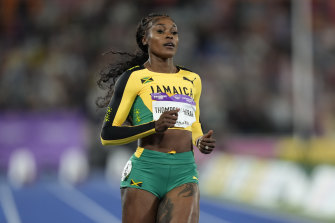 Thompson-Herah struggled to raise a sweat nor even much of a smile after a perfunctory performance.

The race of the night came when Scotland’s Eilish McColgan moved out in the final 200 of the 10,000m to overtake Kenya’s Irene Cheptai.

With the crowd at her back willing her home the noise was reminiscent of Mo Farah winning at London in 2012. Its remarkable how much noise 25,000 people can make when a rangy Scot comes from behind and surges down the back straight. She won in 30:48:60, a Games record.

Get all the latest news from the Birmingham Commonwealth Games here. We’ll be live blogging the action from 4pm-10am daily.