Coleman, who narrowly escaped a ban last year for missing three doping tests, was provisionally suspended by the AIU in June. 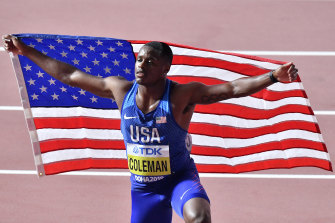 The American sprinter had claimed at the time that anti-doping officials had not followed procedure when he missed them after going Christmas shopping on December 9, 2019 at a time when he had said he would be at home.

"We impose on the athlete a period of ineligibility of two years, which will end on May 13, 2022," the AIU said in a statement on its website on Tuesday (Wednesday AEDT).

"The decision may be appealed to the Court of Arbitration for Sport."

Three failures to properly file whereabouts information or being absent during the hour stated in a 12-month period can result in a one- or two-year suspension.

Coleman, also a silver medallist in the 100m and 4x100m relay at the 2017 worlds, escaped suspension last year when the US Anti-Doping Agency (USADA), after receiving guidance from the World Anti-Doping Agency (WADA) on how to calculate the 12-month window for three missed tests, withdrew the charge.

The sprinter later demanded an apology from USADA, but two of those misses have now combined with the latest failure to result in a ban.