A stacked Skills Challenge and 3-Point Contest will kick off All-Star Sunday, while three new faces battle it out in the half-time Dunk Contest.

Things will be a little bit different at the 70th All-Star Game this year but don’t worry, we’ve got you covered.

For a start, all the action will take place on a single day – meaning we get the Skills Challenge and 3-Point Contest before the All-Star Game itself, as well as the Dunk Contest during half-time. 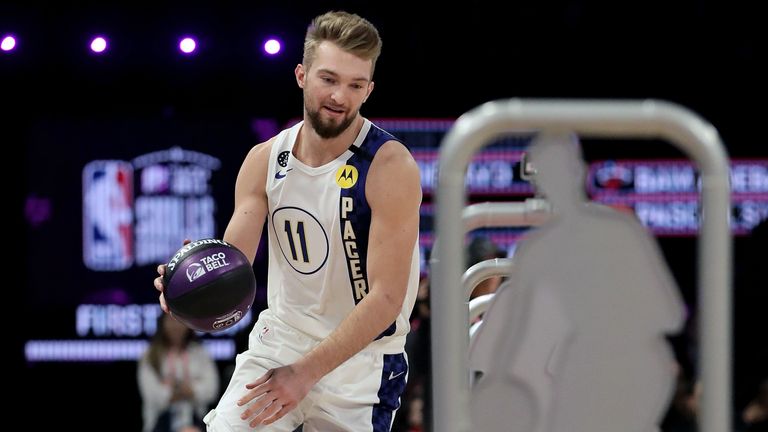 The Skills Challenge has been a staple of All-Star weekend (back when it could be a weekend) since 2003, when Jason Kidd won the inaugural event.

Since then, the format has varied slightly over the years but is now a knockout tournament guaranteeing a guard versus a frontcourt player in the final. Two players will receive an automatic bye for the first round, as chosen by the NBA.

Players must dribble between obstacles, throw a perfect pass through a target, dribble the full length of the court for a layup before finally capping it all off with a three-point shot at the opposite end to finish.

The Point God Chris Paul and Pacers’ lefty magician Domantas Sabonis face off in the final, with Paul snatching it. It’s written in the stars with the 11-time All-Star competing in the event for the first time since 2011, so long ago he was playing for the New Orleans Hornets.

As always, contestants have one minute to hit as many three-point shots as they can from five racks of five balls positioned outside the arc. Four of the balls are worth a single point while one – a red, blue and white ABA-style ball – is worth two points as the ‘money ball’.

Players also choose one of the five racks to be their ‘money ball’ rack, made up entirely of the two-point balls. However, for the second consecutive year, the contest will also feature the Mountain Dew Zone. Each of the two balls in the zone is located six feet behind the 3-point line and is worth three points. The players get 10 seconds added to the traditional minute to complete those two extra shots.

2015 winner Steph Curry reminds everyone, if they needed reminding, that he remains the greatest shooter on the planet. Look out for a big score from Devin Booker too, who hit 28 out of 34 points to win the contest in 2018.

This one is a bit more straightforward this year. There are only three contestants and in the first round, they will perform two dunks each. The two players with the highest combined score (a maximum of 100 and a minimum of 60) will then advance to the final round.

In the final round, they will perform one dunk each. The winner will be determined by the judges raising cards for the winner, instead of the traditional individual score.

Aaron Gordon sits at home shaking his head and Zion regrets not taking part, even if he is gassed at half-time.

In all seriousness, Cassius Stanley has great hops and isn’t a household name, that shock factor will see him take the crown.

*Replaced by Devin Booker (Phoenix Suns) due to injury.

There is once again a draft format this year, with Team Durant and Team LeBron facing off as the leading vote-getters in the East and West. This is the fourth straight year that James was named an All-Star team captain, while it marks the first time for Durant. The first eight players to be drafted on Thursday night will be the starters for their team.

The 2021 All-Star Game will use the same format as last year: the first three quarters start 0-0 and last 12 minutes, with the winning team in each given a cash prize to donate to a charity of their choosing. The pot will roll over if the teams are tied.

When it gets to the fourth quarter, the clock turns off completely and the winning team is the first to reach the target score. That’s calculated by taking the leading team’s cumulative score through the first three periods and adding 24 – to represent the jersey number of Kobe Bryant.

Given that Kevin Durant is out with injury, but will still be drafting his team and coaching them on the side-lines (I’m expecting full Xs and Os, Kevin), we’re taking Team Durant in this one.

Catch All-Star Sunday in its entirety on Sky Sports Arena, with coverage from 11:30pm.