Since a one-and-done stint with Louisiana State University, confirming his selection as the No.1 pick in the 2016 NBA draft, the expectation on Ben Simmons has been that he would lead the Philadelphia 76ers to a title.

One of the league’s storied franchises, the Sixers have not taken hold of the Larry O’Brien Trophy since 1983, but Simmons, the 211-centimetre, 109-kilogram guard with a 210-centimetre wingspan from Melbourne, was anointed as the man who would complete the controversial rebuild dubbed “the process”.

Ben Simmons dunks during a win over the Washington Wizards this week.Credit:Getty Images

“As a very significant piece of that team, it does speak to his contribution and the growth of his game.

“I guess a lot of people always fall back on his shooting, and the perimeter shooting, the scoring, but I think those more close to it … they realise what he is doing is very, very special. Of course, no matter who it is, there is always room for improvement, but what he has been doing has been extraordinary and, hopefully, that can translate through the play-offs.”

The inability, or desire, to not unlock a perimeter game, whether from mid-range or beyond the three-point arc, has long been the knock on Simmons in an era when court spacing has become essential.

Former 76ers coach Brett Brown said in August last year he didn’t feel it was a “trepidation” issue for Simmons, who this season has been working with assistant coach Sam Cassell on his shooting mechanics. But what may never be able to be developed is a scoring mentality. 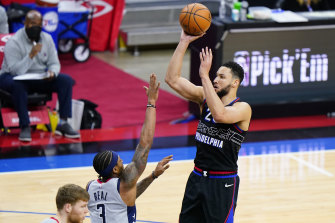 Simmons’ points – he averaged 14.3 off 10.1 field-goal attempts a game in 58 games – overwhelmingly came from lay-ups, dunks, hooks and runners, or he opted to drive and dish to a teammate, shown in that he took only 10 three-pointers through the regular season, making three.

Under new head coach Doc Rivers, who guided the Boston Celtics to the 2008 title, there had been speculation he was to be traded for James Harden, a scoring beast and former league MVP, but the Sixers opted to continue to build around Simmons and Embiid, and surround the pair with potent outside shooters, including Danny Green and Seth Curry.

“Teams will use different strategies. They will dare him [Simmons] to beat them offensively and see if the [defenders] can’t pack it [the key] in, or they will stay at home on the shooters, or they will collapse in, and he penetrates and it’s just a matter of making shots,” Gaze said.

“It’s not a unique thing. But … his unwillingness to be a perimeter shooter, I think is more of a reflection of his very high IQ. If you are not feeling confident, and you feel you can create better scoring opportunities just by not blazing away, I actually give him extraordinary credit for that.”

That’s something Rivers alluded to after the game-one win over the Wizards. While Simmons had only six points, and missed all six free-throws, he became just the sixth player in post-season history to have 15 rebounds and 15 assists in a game, finishing with a +18 rating.

Rivers has rarely been short of a good quote through his Hall of Fame career but it’s not often he has heaped as much praise on a player as he did on Simmons, having called on him through the season to be a leader.

“He’s a treasure. He’s something that you don’t see a lot in this league,” Rivers said. 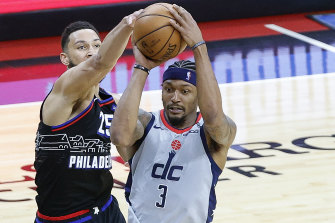 Simmons blocks Bradley Beal of the Wizards. The Australian is a contender for defensive player of the year.Credit:Getty Images

“He has a skill set that is so different. There’s a lot of people that can’t make what of him. All I see is greatness in him. And I just want him to keep doing what he’s doing.”

That praise was rewarded with Simmons contributing 22 points – his best play-off return since 31 points against Brooklyn in 2018 – and eight assists and nine rebounds in only 29 minutes in a 120-95 game-two rout when he was not even needed in the fourth quarter, as the series shifts to Washington. Simmons, never afraid to make his feelings clear, then had an equally blunt message for those critiquing his shooting.

“I’m not trying to stick to anybody in Philly – I thought it was pretty hard to get 15 assists and 15 rebounds in the NBA in the play-offs. I thought that was pretty impressive. And we won,” he said.

“What y’all want? You want to win? For me, I’m here to win and I’m doing what I need to do to help my team win, whatever it is. I’m not trying to prove anybody wrong or anything like that. I’m trying to do my job to win.”

It shouldn’t be forgotten that the jump shot of the legendary James wasn’t a natural strength early in his career, and it took many seasons before Earvin “Magic” Johnson, a big guard like Simmons, was comfortable to regularly turn to his jump shot, and that was in an era when the key was crowded. Jason Kidd, another all-time great point guard, took until 28 before he had a consistent jump shot.

However, Shane Heal, the Boomers great and former NBA marksman, isn’t sure Simmons’ outside shot will develop.

“He is a great player. So many people concentrate on the fact that he can’t shoot but when you look at his defence, his passing, his size and ability to defend so many positions, he is a freak, he really is,” he said.

But then comes the caveat.

“I think it starts with the mentality. There is no doubt he can learn to shoot the ball from the three-point line but the way I watch him play, and his lack of commitment to get better at that, and to try and do that in games, signifies to me right now that he just doesn’t want to,” Heal said.

The pressure and focus will intensify on Simmons as the play-offs progress, and how he handles that is a variable only time will answer, particularly against the loaded rosters of the Brooklyn Nets and Milwaukee Bucks. For those declaring that Simmons must win right now, it’s worth remembering that it took James nine seasons and to leave Cleveland and join a “super team” in Miami before he claimed his maiden NBA title.

What is clear is that the Sixers can rely on Simmons’ ball handling, court vision and ability to be a lockdown defender. He is expected to earn his second selection in the all-defensive first team and is firmly in the running to be the defensive player of the year.

A deep play-off run has implications on Australia’s Olympic campaign, for the Tokyo Games are due to start on July 23 – a day after the NBA finals will end should they go the full seven games.

Andrew Bogut, the Boomers great and NBA champion with the Golden State Warriors, said Simmons was pivotal to Australia’s hopes of a maiden Olympic medal.

“For us, it’s about whether Ben Simmons plays or not – whether he puts his hand up for the first time and wants to play for Australia in a major tournament,” he said.

That remains to be seen, for Simmons says he is focused solely on the 76ers’ title charge, where – shot or no shot – he appears well placed to deliver what the 76ers craved when they signed him to a $240 million contract.