Donovan Mitchell scored 32 of his 45 points in the second half as the Utah Jazz rallied to defeat the Los Angeles Clippers 112-109 Tuesday night in Salt Lake City, taking a 1-0 lead in the Western Conference semi-finals.

After the Jazz made a big comeback in the second half to take a 10-point lead in the fourth quarter, after trailing by as many as 14, the Clippers rallied late to put themselves in a position to force overtime. 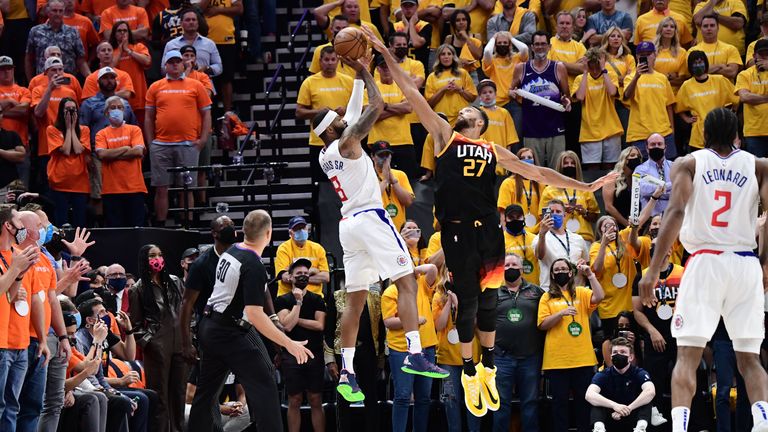 Utah’s defense, however, denied them that opportunity. Rudy Gobert, the favourite to win a third Defensive Player of the Year award this postseason, blocked Marcus Morris’ last-second three-point attempt after the Jazz defense denied Kawhi Leonard and Paul George from getting a good look in the final 15.

The Clippers elect not to call a timeout leading to this frantic final possession… And a Rudy Gobert block to seal the win for Utah! pic.twitter.com/kP1XWiYG7B

The Jazz took the early series lead despite the absence of All-Star point guard Mike Conley, who was sidelined with a strained left hamstring.

Leonard led the Clippers with 23 points and George added 20, but neither player shot well as Leonard only made 9 of 19 shots while George went 4-for-17. Luke Kennard played a big role in helping L.A. stay in this game despite its stars not shining as brightly as normal.

The Jazz had six days of rest since defeating the Grizzlies 4-1 in the first round, and they looked rusty for much of the first half.

Meanwhile, the Clippers were only two days removed from an emotional Game 7 win over the Dallas Mavericks, and they came out strong in the first two quarters.

With Jazz minority owner Dwyane Wade giving him pointers from the front row, Mitchell exploded in the third quarter to help Utah turn things around after the Clippers took a 60-47 half-time lead.

Mitchell scored 16 points in the quarter, including the first 10 points for the Jazz, and helped Utah retake the lead at 72-71 on a fast break with a pass to Royce O’Neale.

The Jazz used back-to-back threes by Mitchell and Clarkson to take a six-point lead in the fourth quarter, eventually building it to 10.

IT'S LOUD IN UTAH. pic.twitter.com/0J5QVEUijJ

The beginning of this series began as bizarrely as the Clippers’ last series in which home teams lost the first six games. Utah jumped out to a 10-2 run, and seemed to be fine without Conley. That did not last long, though. The Jazz suffered an extended drought as the Clippers went on a 22-2 run to go up 24-12.

Utah ended up trailing 25-18 at the end of the first quarter after hitting just 5 of 28 shots.

Donovan Mitchell is taking OVER for the Jazz in crunch time.

The Clippers continued the pressure in the second quarter, taking a 60-47 half-time lead thanks to some sizzling shooting from beyond the arc (11-for-23). L.A. held that big advantage despite a combined 3-of-13 shooting half by George and Leonard.

Kennard led the Clippers in scoring in the first half with 11 points as the visitors’ bench gave the team a huge boost.

Gobert finished with 10 points, 12 rebounds and two blocks, including the game-saver.

Rudy Gobert with the clutch rejection on Marcus Morris as the Utah Jazz take Game 1 pic.twitter.com/dV2dBFYE0r