He might be the NBL’s most important ever signing but Zhou Qi [pronounced Jo Chi] was just another hungry person buying his dinner.

At 216-centimetres, he stands out from the crowd but to his surprise, a couple of Melburnians identified him as a former NBA player. 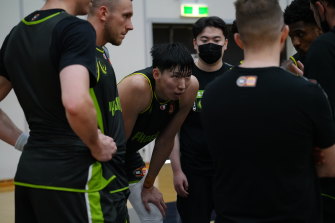 The South East Melbourne Phoenix and Chinese national team centre recounted that moment via his translator when speaking to media on Wednesday and if he thrives this NBL season, it will happen more often.

“When I went out to get some food some fans recognised me but most of the time I have my hood on so they don’t notice me,” Zhou said with a nervous laugh.

The NBL wants to take the hood off Zhou and draw more supporters both here and in China while Zhou hopes he can follow the likes of LaMelo Ball, Didi Louzada and Josh Giddey back to the NBA.

The 25-year-old admits some of his Chinese teammates were surprised he left the booming Chinese Basketball Association where he has won multiple defensive player of the year awards.

Boomers coach Brian Goorjian, who spent over a decade coaching in the CBA, told ESPN the move was the equivalent of Andrew Gaze leaving the NBL in his prime to play in China while Gaze himself said Australians don’t yet understand just how significant the signing is.

“It’s a coup that a lot of people don’t yet realise,” Gaze said.

“He’s a legitimate star. He’s been on the national program, the NBA, and he’s a high-profile guy over there.

“Casual fans wouldn’t be aware of what he has done but it’s another example of a player seeing how this league can provide the exposure and development to get back to the NBA.”

Zhou wants to build on his two years in the NBA with the Houston Rockets and he wants the chance to improve on his game and his English which is still a work in progress.

“On the court I’m fine, it’s just a learning process, and I can have a conversation with teammates, simple stuff, but when it gets complicated I need some help,” Zhou said. 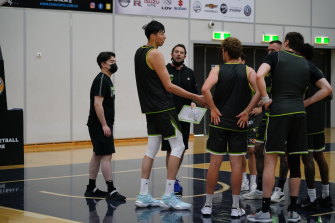 But Zhou doesn’t want his move viewed solely as an NBA stepping stone, he wants his defence to be his calling card and the Phoenix to compete for the title.

“A lot of people say I want to make it back to the NBA through the NBL but, right now, I want to focus on the season and improving myself in this high-level league,” Zhou said.

“That is my only focus at the moment.”

Zhou was hesitant to say whether he would play in the upcoming NBL Blitz starting on November 13 as he only joined training this week after his stint in quarantine.

“I don’t think this specifically about the Chinese community, Zhou Qi is a world-class international talent who spent multiple years in the NBA,” Greer said.

“That’s the message we should spread to all of Victoria’s basketball and sports fans – come and see one of the great talents in the game.”

Zhou put it best when asked if he had a message for Chinese Australians about following him at the Phoenix.

His words could equally apply to NBA scouts.

“If I perform well, the team performs well, then we will definitely attract their eyes and they will come and support us,” Zhou said.

The Phoenix and Melbourne United will play a double-header against the Sydney Kings and New Zealand Breakers at Melbourne Sports and Aquatic Centre on November 13 to start the NBL Blitz.

At this stage, the games will be played behind closed doors with Kayo Freebies showing them live.