LeBron James will not step on an NBA court anytime soon amid uncertainty about the coronavirus pandemic. But he put together a project that should entertain and educate both hoops-crazed fans and the general public.

The “I PROMISE” documentary series makes its debut Monday on Quibi, a mobile-only streaming platform that will showcase 15 episodes capturing the varying successes and challenges James, teachers and students have faced since the opening of the “I Promise School” in 2018 in James' hometown of Akron, Ohio.

The show is launching with three episodes, and will unveil new ones the following 12 weekdays. Each episode, which lasts about eight minutes, will deal with specific themes regarding the program’s efforts to close the educational achievement gap in James’ hometown. According to Quibi’s release, “the series will explore the day-to-day trials, triumphs, and life-changing impact of the school staff, students and families working together in a unique, family-first educational environment that embraces the trauma and challenges many face in Akron.”

Marc Levin directed the series while James served as an executive producer.

“It’s not instant oatmeal that we’re creating here,” James said in the documentary. “You can’t just put the oatmeal pack in the bowl and putting it in the microwave and we’re ready to go. We’re good with dealing with the process.”

In one episode, James’ mother, Gloria, revealed that her son “sees himself” in the 1,443 students the I Promise program serves at the I Promise School (343 students in third through fifth grade) and at the Akron I Promise Network (1,100 students in sixth through 11th grade). That is because those students “have an initial lack of hope in their future,” Gloria said. James often felt the same way after growing up in a single-parent home and moving multiple times throughout his childhood. As Gloria revealed, “we were pretty much homeless.” 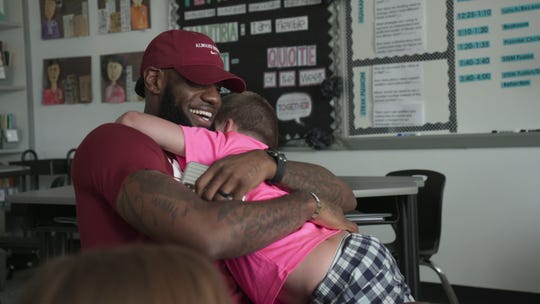 Another episode captured some students sharing their conflicted feelings about attending “I Promise.” Some expressed feeling empowered to attend a school that James supports: the LeBron James Family Foundation has given Akron Public Schools just over $1 million a year to help pay for teachers’ salaries, expand staff so that each teacher has no more than 20 students, support after-school programs, tutors and provide various resources that include food, medical care, shelter, legal aid and career development. Despite having their last day of classes on March 13 because of COVID-19, “I Promise” still kept its Family Resource Center open to help students and families with food, clothing and care packages.

Other students expressed having insecurities about that support. The school has enrolled 120 new third-graders through a lottery based on low reading schools. Because of that, one student shared with teachers and classmates that siblings “would call me stupid because you go to this school for kids that were supposed to get held back.”

Other episodes show that the students deal with issues beyond learning comprehension. One student has dealt with learning and trust issues after growing up in a crime-ridden neighborhood. He recalled witnessing a SWAT team entering his uncle’s apartment to arrest him for drug possessions, telling him to lay on the floor. Other students detailed how they lashed out in anger at their teachers, all of whom shared the challenges they face with earning the kids' trust and holding them accountable for their behavior.

By sharing these stories with both depth and sensitivity, the documentary both details James' vision and the hurdles that have awaited all parties involved to execute the game plan.

“It almost seems like when you grow up in the inner city or the projects, no one cares about you,” James said in the documentary. “So many kids like myself have dreams. The only thing to stop those dreams from becoming a reality is the support around them. For me to be able to use my platform or use my resources, I was passionate about having our kids and hometown living under one roof.”