Home » Basketball » LeBron James responds to Zlatan Ibrahimovic: ‘There’s no way I will ever just stick to sports’

The Los Angeles Lakers snapped a four-game losing streak Friday night with a 102-93 victory against the Portland Trail Blazers.

Like he has been for nearly every game in his NBA career, LeBron James was at the center of the action, recording 28 points, 11 rebounds, seven assists, four steals and three blocks in the win. Afterward, though, James reminded everyone that he is more than a basketball player.

James was asked about recent comments made by soccer superstar Zlatan Ibrahimovic that essentially posited that athletes, including James, should "stick to sports."

"I would never shut up about things that's wrong," James said when asked about Ibrahimovic's comments.

"I preach about my people and I preach about equality, social injustice, racism, systematic voter suppression, things that go on in our community," James said. "Because I was a part of my community at one point and seeing the things that was going on and I know what's going on still because I have a group of 300-plus kids at my school that's going through the same thing and they need a voice. And I'm their voice. I'm their voice and I use my platform to continue to shed light on everything that may be going on not only in my community but around this country and around the world.

"There's no way I will ever just stick to sports because I understand how this platform … how powerful my voice is."

“I have 300+ kids at my school who need a voice and I’m their voice…I’m the wrong guy to go at, I do my homework.” @KingJames weighs in on the recent comments made by soccer superstar @Ibra_official that people should “do what they’re good at” and “stay out of politics”. pic.twitter.com/Scfp6HhnP2

James then shouted out Renee Montgomery, the former Atlanta Dream star and activist, who officially became part of the WNBA team's ownership group Friday. He also turned the tables on Ibrahimovic, citing 2018 comments the former Los Angeles Galaxy star made about "undercover racism" in his native Sweden that seems to expose some hypocrisy in Ibrahimovic's recent comments about "sticking to sports."

"I speak from a very educated mind," James said. "I'm kind of the wrong guy to actually go at because I do my homework." 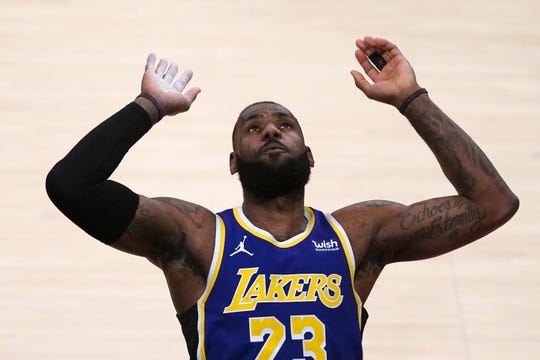 "(LeBron) is phenomenal at what he's doing, but I don't like when people have some kind of status, they go and do politics at the same time," Ibrahimovic said in a recent interview with UEFA for Discovery+ in Sweden. "Do what you're good at. Do the category you do. I play football because I'm the best at playing football. I don't do politics. If I would be a political politician, I would do politics.

"That is the big first mistake people do when they become famous and they become in a certain status. Stay out of it. Just do what you do best because it doesn't look good."

Ibrahimovic, 39, currently plays for A.C. Milan in Serie A. He played for Major League Soccer's Galaxy in the 2018 and 2019 seasons.