Luka Doncic and Trae Young are both balling in the NBA Playoffs.

Doncic has helped the Dallas Mavericks make a mockery of bookmakers’ odds as they romped to a 2-0 series lead after a pair of wins on the road at the Los Angeles Clippers.

Young was spat at by fans in Madison Square Garden but still managed to average 31 points across his first two playoff games and his opening game last-second winner ensured that the Hawks return to Atlanta with the series split 1-1. 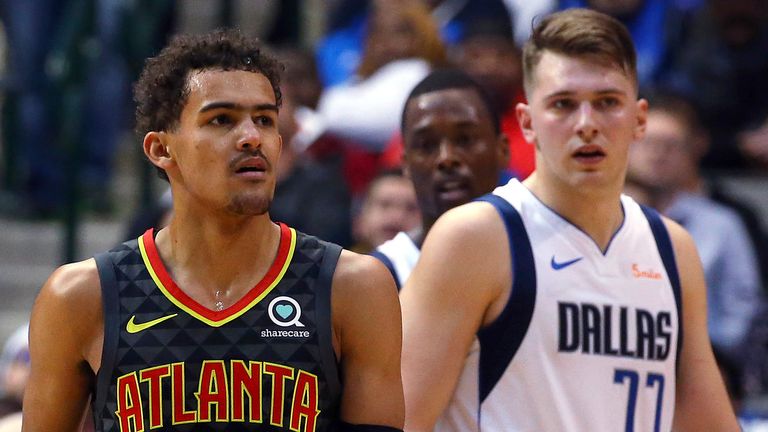 On draft night 2018, the pair were the subject of a draft night trade which allowed the Mavericks to move up to pick number three to select Doncic, whilst Atlanta fell back to pick five but still got Young as well as future trade assets.

This pair’s fate has been intertwined from the very start and this year they are both making a big splash on the post-season stage.

Let’s take a look at how each of them are doing in turn, as well as looking ahead to Friday night’s NBA action involving the pair.

The Slovenian Maverick has been sensational in playoffs so far, averaging 35.0 points, 8.5 rebounds and 9.0 assists across the first two games.

If you stretch that back to his first NBA Playoff involvement in the bubble last year, then across his first eight career playoff games, he’s averaging 32.0 points, 9.5 rebounds, 8.8 assists, shooting a hair over 50 per cent from the floor.

Those are elite numbers, and Doncic has led the team to two impressive wins at Staples Center over the Clippers.

On Friday night, the teams face each other once again, this time back in Texas, with tip-off at 2.30am UK time.

Assessing Doncic’s play on NBA GameTime, Kevin McHale said: “He is just playing the game, the way it should be played. He’s not forcing anything.

“He’s letting the game happen for him. He’s playing so well right now. He’s just making all the right decisions and the team feels so comfortable when he has the ball.

“They just know he’s going to make plays for them. He’s playing at a level which is amazing for a 22-year-old.”

If he can carry on in the same fashion, then the Dallas Mavericks are poised to add another chapter to the Clippers’ playoff misery.

With everyone in the NBA focused on fan misconduct, the Clippers find themselves in a familiar position after losing the first two games at Staples Center.

Now, as the best-of-seven series shifts to the Lone Star State, the Mavericks can deliver a potentially decisive blow in Game 3 on Friday night.

No team has overcome a 3-0 deficit in the NBA playoffs. The Clippers are hardly a candidate to break that trend, facing a first-round elimination for the fourth time in six years and the franchise has never won a playoff series after losing the first two games.

The Clippers will be dealing with a large, boisterous crowd in Dallas, where more than 15,000 fans are expected for Game 3.

That doesn’t bode well for Los Angeles, who parted with coach Doc Rivers after an upset loss to Denver in the second round of last years playoffs. With Tyronn Lue now on the sidelines, nothing much has changed for the Clippers.

The franchise, which started as the Boston Braves in 1970 and also had a stint in San Diego, has never advanced past the second round of the playoffs.

Young is in the chaos of the NBA Playoffs for the first time but ensured he looked right at home from the get-go with his last-second game-winner against the New York Knicks at Madison Square Garden.

He went to the NBA’s most intimidating arena and despite the crowd chanting against him throughout the night, produced the telling blow on his debut and then put his finger to his lips to silence the vociferous home crowd.

Young has been used to dealing with hostile crowds since his college days, arguably even beforehand, so it’s probably no surprise that the furnace of MSG didn’t faze him.

That said, a hostile crowd is one thing. The really ugly incident in Game 2 when a fan spat on Young while he was preparing to inbound the basketball in the fourth quarter of New York’s 101-92 win, is something different entirely.

“It’s unacceptable. I don’t even understand it,” Atlanta’s John Collins said. “You come to arena to watch a basketball game, where does it come into your mind to spit at someone? It’s so disrespectful.”

Young obviously thrives when he’s railing against those willing him to fail but on Friday, the Atlanta Hawks get their first home playoff game since 2017 when they take on the Knicks after splitting the first two contests in New York – it will be interesting to see if he can keep up the same level of production in front of friendlier faces back at State Farm Arena.

So far, he averaged 31.0 points, 4.0 rebounds and 8.5 assists in his opening two playoff outings.

But his team-mate Collins, quoted above, could hold the key as to whether Atlanta can return to winning ways.

The Knicks rallied from a double-digit deficit in Game 2 thanks to a dominating performance on the boards. They out-rebounded the Hawks 54-41, leading to a big edge in second-change points and Collins was held scoreless.

He will need to play better if the Hawks are to return to winning ways on Friday night, with tip-off at midnight.