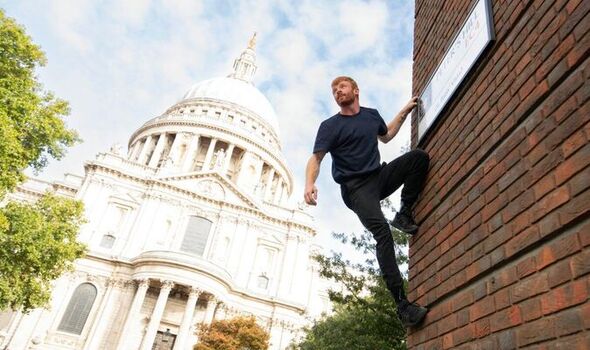 One captivating photo shows Toby in mid-air, halfway through a somersault, with Tower Bridge in the background.

Elsewhere in the city, the parkour pro could be seen hanging off a street sign at the top of a wall in front of St Paul’s Cathedral, and also performing a massive leap over a stairwell near The Shard.

Toby, who is a member of specialist parkour and freerunning group STORROR, recorded his jaw-dropping escapades around London as part of a campaign for Samsung, to promote its latest device, the Galaxy Z Flip4.

He said: “Wherever I go, there’s always a challenge – something you haven’t seen before.

“The more and more skills you learn, the more sort of variations and opportunities are unlocked in front of you.

“You think you’ve mastered one skill and then you start playing around with another, the playground opens up, and there is a whole new world of opportunity in terms of challenge.”

Toby and his six STORROR teammates have amassed over 7.5 million subscribers to their YouTube channel, with their extreme content racking up more than one billion views since the channel launched.

The team have also worked on Hollywood movies including “6 Underground” – the 2019 action film directed by Michael Bay, and starring Ryan Reynolds and Dave Franco.

During filming, the group were given the freedom to instruct experienced cameramen as they saw fit, while also serving as actors’ stunt doubles.

And Toby described the Samsung Galaxy Z Flip4 as “a pretty wicked bit of kit”, adding: “Filmmaking is a huge part of my life as we’re always capturing content on the go.

“The Samsung Galaxy Z Flip4 comes in super handy when I’m training on my own and I just want to set the camera down and get some shots. Being able to see what I’m framing on the front screen is game changing.”

The 28-year-old set the device to either Quick Shot, to take self-portraits, or FlexCam mode – meaning that he no longer has to rely on strangers or friends to take pictures and video for him.

He said: “I can just put the phone down on a bag, get the angle just right. So, you’re basically not going to have any more trouble completely guessing what the frame’s going to look like.”