Home » Basketball » Talking Buckets with Mo Mooncey: Knicks and Wizards surging with playoffs around the corner

We are now less than one month away from the playoffs beginning. ONE MONTH! I cannot explain my excitement to see how the post-season unfolds, but before we get there, there’s still a lot of important regular-season fixtures we need to look at.

Things are tight at the top with the 76ers and Nets both vying for the number one seed in the East, while the Suns seem to have stepped up another level to potentially take the top spot away from the Jazz in the West. Keep an eye out for the Clippers making a sneaky run, too.

Further down, it seems as though the teams ranked 4-9 in the Eastern Conference are forever changing spots in the standings. There are also three teams all within touching distance of the tenth seed, which will grant them a place in the Play-In tournament.

Over in the West, teams may be more tactical with which seed they are after, seeing as injuries have caused the Lakers to slip down to fifth.

Let’s dive straight into the winners of the past week. Usually, we do winners and losers, but it’s been a tough week for everyone given current events happening outside of basketball so we will focus solely on the positives. Let’s talk buckets!

As we discussed on this week’s episode of Heatcheck, I believe Nikola Jokic has secured the MVP award, with fellow big-man Joel Embiid in second place.

HOWEVER. We must pay our dues to the two-time former MVP who has been playing some of the best basketball of his career lately. If Steph can lead the Warriors to a spot in the playoffs, I believe he should most definitely be included in the MVP conversation too.

At the time of writing, The Chef has overtaken Bradley Beal at the top of the NBA’s scoring leaderboard for this season, but it’s not just this season’s statistics that are the most impressive. Steph is putting up numbers we have not seen since Wilt Chamberlain himself!

Last week he surpassed Wilt as the Warriors’ franchise scoring leader and joined Chamberlain as the only Warriors players with 10 straight 30-point games in franchise history. He also became the oldest player (33 years old) in NBA history to score 175+ points over a four-game span, with the previous oldest being Chamberlain, aged 31, in 1967-68.

Steph also became the 10th player in NBA history to average 40 points per game over an 11-game span, but we do have to pay respect to the greatness of Wilt, who managed this feat over a 515-game run.

So I guess if The Chef can learn LeBron’s secrets to never ageing and stay cookin’ until 2027, he might be able to catch Wilt on that record too.

Jokes aside, and debates aside, I hope everyone is enjoying watching one of the greatest scorers to ever play the game.

Playoff basketball is about to be back at Madison Square Garden!

Knicks fans are celebrating, with good reason to, because it’s looking like they will be making their first post-season appearance since 2013. They will not just be making an appearance as a lowly eighth seed either, this team is sitting six games over .500 in the fourth spot of a tough Eastern Conference!

The team is currently on an eight-game winning streak but my favourite part of all this is that – unlike their crosstown rivals the Nets – the Knicks are a hard-working team built the right way. The kind an everyday person can root for despite their allegiances elsewhere.

We clowned Knicks fans for missing out on KD and Kyrie, not being able to trade for AD or draft Zion, but it seems like things have worked out for them in the end.

Julius Randle, a player who others counted out early on in his career, has been leading this team putting up superstar performances. RJ Barrett, who many were preparing to call a bust, has been shooting over 40 per cent from behind the arc on over four attempts per game since the All-Star Break. Derrick Rose is proving he can contribute extreme value as a veteran on a team. Immanuel Quickley is continuing to show why he’s possibly the biggest steal of the NBA draft.

The best part for me is: I was wrong. Knicks fans, I was concerned your hot start to the season would not be sustainable given the minutes that we saw your key players playing. We have seen this be the case with Tom Thibodeau’s teams before, but somehow the Knicks have stayed mostly healthy.

I am happy for you guys, because you are a team that I do not think anyone wants to see in the first round. Whether the Knicks will win their playoff matchup is a question remains to be seen, but one thing I know for sure is that this team is tough.

Whoever has to face them will be worn out if they do get past New York and into the second round.

Another team in the East that’s making a late-season push is the Washington Wizards, who – if they can maintain their place in the Play-In spots – will be very likely to cause an upset. They currently sit in 10th but have two superstars on their roster. They have won their last six games in a row, eight of their last nine, and things seem to be clicking at the right time.

With 14 points, 20 rebounds and 10 assists on Wednesday night, Russell Westbrook recorded his 10th triple-double of the month, becoming only the 10th NBA player in history to do so (joining Oscar Robertson and Wilt Chamberlain).

Davis Bertans started the season off slowly, appearing as though he was still suffering the effects of Covid. He is now looking more like the player that was rewarded with an $80m contract in the off-season. He has literally not missed a free throw since the All-Star break and has been shooting 45 per cent from the three-point line over the same period.

Daniel Gafford has provided a much-needed spark on the defensive end after being part of the trade which saw him replace Mo Wagner. In games Gafford has played, the Wizards would be the best defensive team in the entire league (per DefRTG) if you stretched that sample size over the full season.

Add to this Bradley Beal continuing to be Bradley Beal, and well, watch out for the Wizards. 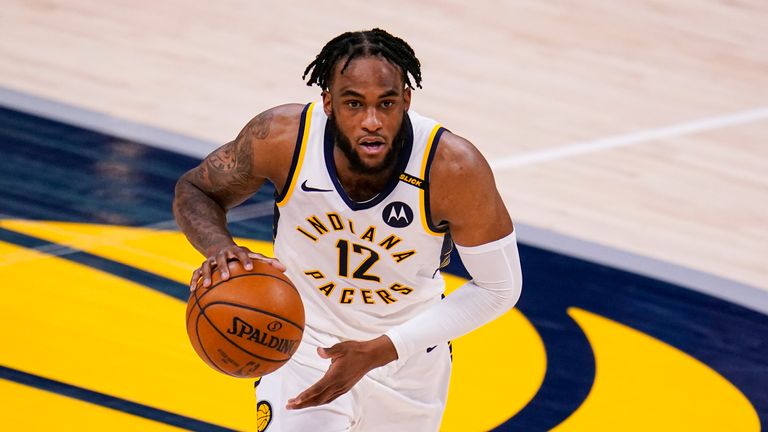 Here’s a feel-good story to end this week’s column, as I love seeing players persevere and achieve their dreams. I always tell people, there are loads of talented ballers out there in the G-League and overseas, often it’s just a case of getting the right opportunity.

This week Canadian forward Oshae Brissett got his opportunity and ran with it.

Back on April 1 the 22-year-old signed a 10-day deal with the Pacers, and given the injuries to the squad, signed a second 10-day deal after that. There were not many expectations for him as the Raptors waived him at the end of training camp and he found his way to the Fort Wayne Mad Ants.

On April 20, he made his first career start in a game against the Spurs, scoring 13 points on 5-of-8 shooting from the field and 3-of-5 from three, along with six rebounds and a steal. He was rewarded by the Pacers taking him off the market and inking him to a three-year deal with the team.

Immediately after signing the biggest contract of his life, Brissett balled out! He went off against OKC, posting 23 points, 12 rebounds and three blocks in the win.

If you want to take a lesson from this, never stop grinding, because the Marathon ALWAYS continues. I will catch you guys on Sunday for live coverage of the Nets vs Suns, which you can watch for free on the Sky Sports YouTube Channel, and then for another episode of Heatcheck on Tuesday. Peace.