Home » Basketball » Talking Buckets with Mo Mooncey: March was a month of madness and April is pretty crazy too

After taking a Kyrie Irving-style break from this column over the past few weeks, I’ve been reflecting on a conversation I had with NBA legend Hakeem Olajuwon last year about perseverance.

For those unaware, it’s currently the month of Ramadan in which Muslims – like Hakeem – fast (no food or water) during daylight hours for 30 days.

I thought: if Hakeem can win an NBA Player of the Month award whilst fasting, I’ve got no excuse not to come back and talk buckets with you guys! Check out the conversation between Hakeem and I, where he detailed exactly how he managed to play at the highest level without ANY food or water!

So with all of that said, let’s talk buckets! I spoke about IT’s comeback on last week’s episode of In The Paint (search for it on Snapchat as it’s exclusive over there) but this made me so happy I’ll talk about it again now for you. The ultimate feel-good story. The embodiment of my favourite motto “The Marathon Continues.” The comeback we’ve all been waiting on!

After being out of the league for 14 months, Isaiah Thomas signed a 10-day contract with the New Orleans Pelicans. Thomas underwent a hip resurfacing procedure last May to help alleviate pain in his hip and says he finally feels like he’s back to his regular self.

Having said this, I think we all knew he wouldn’t quite reach the levels of his 2016/17 season which saw him finish top-five in MVP voting after averaging 28.9 points per game, but it was still great to see him back on the court.

Things you love to see: Lou Will welcoming Isaiah Thomas back to the NBA last night 🤝 pic.twitter.com/a9AaquTJec

He scored 21 points off the bench in his first two games for the Pelicans, but was only given four minutes in his final appearance for the team. The franchise say they loved his veteran presence in the locker room and the way he interacted with the younger players on their roster.

His contract has expired and the team won’t be bringing him back right away, it’s still a possibility down the road, but injuries to players such as Josh Hart will factor into which player gets added to the squad.

The journey is far from over for the man previously known as the ‘King of the Fourth’, as sources say the Heat, Bucks and Celtics are all keeping an eye on the 5ft 9in guard.

Nothing would make me happier than if he can return to Boston full circle. I don’t care about his defensive limitations, I have mad love for Isaiah and anyone who doesn’t is simply bad vibes! 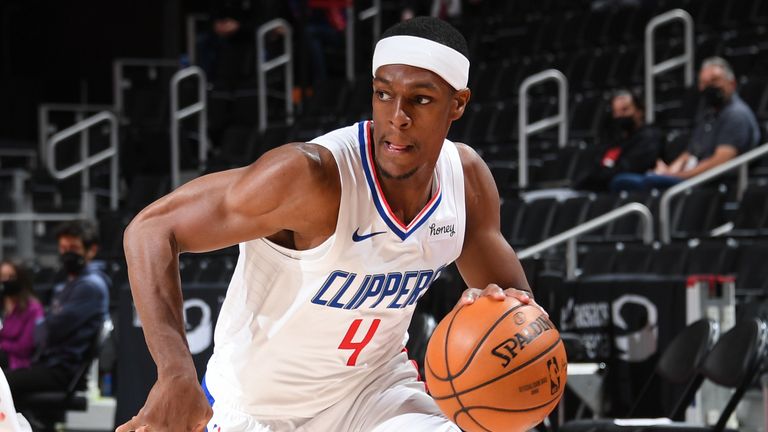 Ladies and gentlemen, by now I’m sure you’re all aware of the phenomenon known as ‘Playoff Rondo’ – when the point-guard’s play noticeably steps up in the post-season.

For those who have been following the league for a while, you’ll remember ‘National TV Rondo’ who put up absurd stat-lines every time he was playing in a nationally televised match-up; and if you watched the Clippers take on the Suns last week, you were introduced to ‘versus CP3 Rondo’.

Given the history of animosity between the two, it was great to see Rondo (who is mistakenly labelled as a terrible shooter) dropping a three over Chris Paul on his way to 15 points in 19 minutes to go along with nine assists in the win.

whatever Rondo said to CP3 here had some serious “i haven’t forgotten” energy with it. pic.twitter.com/bV63XeGOSi

The Clippers have needed a true point guard for a long time. Patrick Beverley is a pesky defender but remains limited on offense so they traded sixth man Lou Williams to the Hawks in exchange for the two-time NBA champion Rondo.

Since the trade, the Clippers are 7-0 with Rondo in the team, and have outscored other teams by 71 points when he’s on the court during those games.

I’m hoping we *finally* get to see the Clippers against the Lakers in the playoffs, as I KNOW things will be heated between Rondo and his former Laker team-mates with whom he won the championship last season, as well as between Montrezl Harrell and the Clippers after switching sides as a free agent in the off-season.

Unfortunately, I don’t think anyone told JJ Redick that he’s not a superstar in this league. Is he one of the best shooters ever and still extremely effective at the age of 36? Yes. Is he a star? Definitely not.

The logic was clear, Jrue Holiday would cover for his defensive liabilities, and Zion’s interior presence would draw defenders inside leaving JJ wide open to knock down threes.

Well, at least I hope that was his logic, because now it’s becoming apparent that he simply wanted to collect the biggest pay-cheque possible before forcing his way to a contending team. Rumours of him being unhappy in New Orleans began surfacing earlier this year and many expected him to be bought out at the trade deadline. Instead, JJ and Niko Melli were traded to the Dallas Mavericks in exchange for James Johnson, Wes Iwundu and a second-round draft pick.

After posting a discouraging 8.7 points a game and shooting 36.4 per cent from three, with Father Time starting to catch up with him, it was logical for the Pelicans to trade him and get some value in return, rather than simply buy him out of his contract and allow him to leave the team as a free agent. This is pretty much a common-sense decision, as the NBA is (as people often forget) a business.

JJ went on his own podcast and expressed that he was upset that he was not granted a trade to the Brooklyn Nets, which he had apparently requested from Pelicans’ executive vice president David Griffin. He claimed Griffin did not keep his word, and so on and so forth.

Back to the original point about not being a superstar – you only really get a say in where you’re traded if you’ve contributed something of value to your franchise. It’s obvious why the Raptors listened to Kyle Lowry when he was in trade talks.

Players who have delivered championships, MVPs and All-Star selections are listened to because it’s a gesture of goodwill from the franchise and a way of thanking them for everything they gave to the organisation. What did Redick give the New Orleans Pelicans?

JJ’s reason for wanting to be in Brooklyn was apparently not to collect an ‘easy’ championship ring the way Blake Griffin hopes to, but to be closer to his family who live in Brooklyn.

This leaves me with two questions. One: it that’s the real reason, when you were a free agent in 2019, why didn’t you sign with the Nets or Knicks, or another east coast team which is closer to home than New Orleans?

And two: why don’t you just retire? Then you have time to spend with your family and your podcast, because complaining you didn’t get traded to Brooklyn is a sob story that I don’t think anyone cares to listen to. I’ve got a lot of respect for Kyle Lowry. We just spoke about his name being in trade talks, and a lot of the deals came close but didn’t get done.

For some reason, the Lakers were adamant in refusing to include Talen Horton-Tucker in trade talks for the All-Star and NBA champion Kyle Lowry, a decision they may very well come to regret if they don’t win the championship this season.

The Heat had a similar stance on some of their young players, and the 76ers refused to be finessed by Raptors president Masai Ujiri who was asking for two young players and two first-round picks in exchange for a veteran whose contract expires this summer anyway.

So, Lowry remained a Raptor.

The team currently have a 22-34 record and sit in 11th place in the Eastern Conference. The reason I have the Raptors taking an L in this week’s column is because they’re currently stuck in what I call NBA purgatory.

Not good enough to make the playoffs, but not good enough to get a great draft pick. With the amount of talented prospects available in the 2021 NBA draft, I believe they should have traded Lowry, as well as Siakam, and hoped to draft a star this summer.

They could have received more draft capital and other young players and set their franchise up for long-term success. Instead, they may lose Lowry for nothing this summer as he is a free agent, and still have Siakam on the team.

Now, I think Siakam is great, but I don’t have him down as the No 1 option on a championship-calibre team. He can play a great supporting role, but I don’t see him spinning his way to a ring without an All-Star leading his team.

Gary Trent Jr has been an excellent pick-up since the trade deadline and OG Anunoby continues to improve. The Raptors have a great supporting cast and just need a star to put them over the top. Much like when they traded for Kawhi Leonard – however those trades are extremely rare.

This season was always going to be a struggle after relocating to Tampa, and I’m never an advocate for tanking, but with no chance at contending this year, I’d be going all-in on trying to draft Cade Cunningham or one of his classmates in this year’s draft.

Stay safe my people, and stay strong to everyone fasting – you can do this! I’ll be back next week to talk more buckets with you.

Until then, make sure you tune in to #NBASundays as the Heat and Nets will be matched up and we’ll be breaking down the action live from the studio. Oh, and the coverage is streaming for free on YouTube for you too. Bless up!