The widow of Kobe Bryant has “every right” to find out how and why Los Angeles County government employees shared pictures of her dead husband and daughter after they died in a helicopter crash last year, her attorney stated in a new court filing this week.

That is why she wants more time to investigate the case and is fighting back against the county’s “full-scale attack” on her last week in court filings, the attorney stated.

The filing from Vanessa Bryant’s attorney, Luis Li, comes in response to what county attorneys said about her last week as they pushed back against her lawsuit about the photos.

The county said in court documents then that her lawsuit had turned into a “fishing expedition” that was taking first responders away from their jobs and was subjecting them to harassment. The county also said the photos were not publicly disseminated, were not publicly posted on the internet and therefore the widow of the NBA legend suffered no actual harm to merit a lawsuit.

Her attorney batted that back Monday.

KOBE BRYANT REMEMBERED: Special coverage of a year after the deadly helicopter crash

“The discomfort and distress she has suffered from government personnel using graphic photos of her deceased loved ones as gossip fodder is very real,” said the filing in federal court. “The County’s downplaying of what happened only confirms that Mrs. Bryant cannot trust the County’s internal investigations and must complete an investigation of her own.” 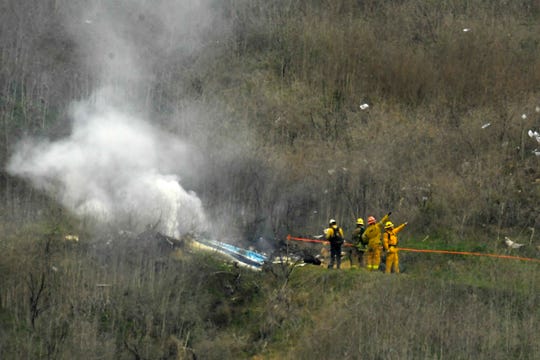 Bryant is suing L.A. County for negligence and invasion of privacy, accusing county sheriff and fire department employees of improperly sharing grisly photos from the crash site. Her lawsuit seeks to punish the deputy defendants and “make an example of them to the community.” The county has fought back by saying that only government personnel and one friend at a bar saw the photographs in question.

The back-and-forth court filings are part of a dispute over the scope of her lawsuit and how much time she should be allowed to gather discovery evidence in the case. The scheduled cutoff for such discovery evidence is currently August. The county wants to stick to that deadline.

But she wants to extend that to February, saying the county has dragged its feet on her requests and that the misconduct is more expansive than she originally understood. She disputes the county’s claim that the misconduct involved a single isolated incident at a bar two days after the crash or that there was no “lurid titillation” involved by county public safety workers.

A judge will consider both arguments and decide in coming weeks.

Her attorney said the incidents they learned about are “almost certainly just the tip of the iceberg” and that investigating the full extent of the photos’ spread is time-intensive because county personnel deleted photos.

“After one Sheriff’s deputy alone took between 25 and 100 photos of the scene and at least two (county fire) personnel snapped even more photos focused on the victims’ remains, the photos quickly made their way into the hands of numerous County employees who had no involvement in investigating the accident, including a trainee monitoring the entry to a trailhead, a video-game buddy, and (a county fire) media relations officer,” Li’s court filing stated.

Three other families whose loved ones died in the crash have filed similar lawsuits over the photos, including a new suit filed recently by the family of John, Keri and Alyssa Altobelli, who were among the nine who perished in the accident.

The county has suggested Bryant is on a “scorched earth” search for information and said she subjected deputies to harassment after she posted four of their names on Instagram in March. Li’s filing took issue with this this and accused the county of “launching a full-scale attack on Mrs. Bryant for having the audacity to request more time to complete her investigation.”

“She has every right to seek to hold Defendants accountable for their actions and to file her lawsuit in the public record, as this Court expressly ruled,” his filing stated. “And she has every right to post a filing from the Court’s public docket on her personal Instagram account.”