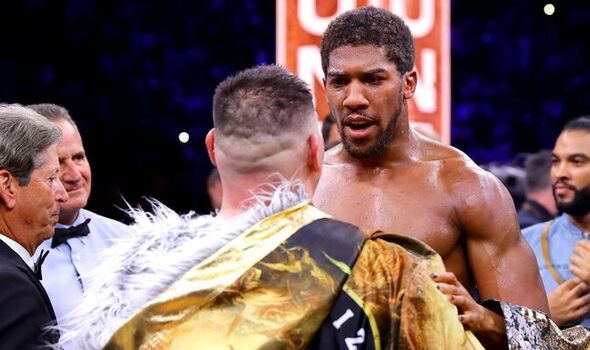 Eddie Hearn believes Andy Ruiz Jr has the capability to cause an upset against Deontay Wilder and for that reason he is refusing to rule out an unlikely trilogy clash between the Mexican and his man Anthony Joshua. The two heavyweights have already collided on two occasions back in 2019 when the underdog snatched AJ’s world titles via a monumental upset at Madison Square Garden before later losing in the rematch six months later.

A lot has happened since then though, not least Joshua losing his world titles for a second time following successive defeats to unified champion Oleksandr Usyk.

But now AJ is ready to throw himself into some massive matchups and long-term rival Wilder is firmly in his sights – a fight that has been several years in the making.

Nonetheless, the Bronze Bomber is currently tied up with a final world title eliminator against Joshua’s old foe Ruiz which is due to take place in 2023.

Hearn has documented his and Joshua’s interest in a fight with the winner as he backed Ruiz to cause another jaw-dropping upset against all odds.

When asked whether he would be interested in a trilogy between AJ and Ruiz, Hearn told iFL TV: “It’s 1-1, the first fight was nuts, the second fight was a shutout but Andy Ruiz is a great fighter.

“I see Andy Ruiz as someone that can beat Wilder, I really do. I think he’s got the IQ to beat him.

“Obviously we know how hard Wilder punches, he’s so exciting and dangerous. It’s a brilliant fight, I guess that will happen early next year.

“I can’t lie the Wilder vs AJ fight is a much bigger fight than the Ruiz trilogy in my opinion but we’ll see what happens.”

Both Joshua and Wilder have recently expressed interest in the super-fight which continues to complicated by boxing politics but Hearn has now revealed there is a clear desire from both teams to finally get it over the line in the near future.

He added: “We messaged them [Wilder’s team] in August and they came back at the beginning of November saying ‘we’d be up for talking about the fight’ to which I said ‘we’ll come back to you’.

“We’ve got meetings in the Middle East early next week and that’s the kind of fight they would obviously love to acquire.

“But after the Ruiz fight was ordered at the convention, there hasn’t been a lot of conversation, no.”

Speaking to Behind the Gloves recently in Abu Dhabi, Joshua seemed confident that a fight with Wilder is on the cards.

AJ said: “Now he’s on a resurgence, I think he’s realising, he’s said he’s got three years left so he wants to tick off his hit-list. Yeah, it’ll happen now.”

Wilder returned to winning ways last month when he flattened Robert Helenius in the first round with a chilling KO in New York.

Joshua is now in line to fight the winner of Dillian Whyte and Jermaine Franklin, who square off next weekend in London.