Canelo Alvarez moved a step closer to becoming the undisputed king of the super-middleweight division after Billy Joe Saunders was forced to retire on his stool with a suspected broken eye socket. There were shades of Kell Brook’s serious injuries from his wars with Gennady Golovkin and Errol Spence Jr when Saunders’ trainer Mark Tibbs waved off the fight.

Saunders was arguably ahead on the scorecards heading into round eight, when Canelo really turned on the style and pushed hard for the knockout that his team and the people of Mexico so desperate craved.

It was a thunderous uppercut that did the damage as Saunders staggered around the ring, preparing for an onslaught as the matador Canelo taunted his rival, waving around his arms.

The soul had been sucked out of Saunders from that one very punch as he struggled to regain momentum.

And as the camera zoomed on the significant swelling of Saunders’ eye, there was only going to be one outcome. 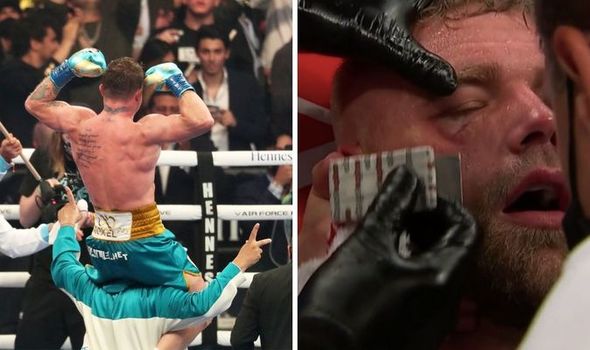 Canelo was victorious as the drained Saunders shook his head in disappointment.

Now the pound-for-pound king, who had his cage rattled by Saunders earlier in the week, will have all eyes on Caleb Plant as he looks to collect the final belt at 168.

For Saunders, this was a fight that proved he belongs at the highest level and who knows what may have happened had not that uppercut not have landed.

Saunders took the fight to Canelo from the sound of the first bell as he looked to claim the centre of the ring, flicking his jab while moving his feet.

The Mexican was clear he would not be bullied, cracking in several thunderous body shots as he backed Saunders up onto ropes. Saunders hastily manoeuvred himself out of the firing line.

Canelo really started to assert himself in the second round and a series of thumping right hands were met by a thunderous roar from the 73,000 spectators inside the AT&T Stadium. The Mexican crowd wanted blood.

A pattern was quickly emerging in this fight and there appeared to be a a stark contrast in punch power, something that was laid bare in the third round when a right hook from Canelo – that would have knocked most off their feet – found the target. Saunders shook his head and smiled.

After his gum shield was nearly blown out by an uppercut in the fourth, Saunders began to find his rhythm as he let his hands go. 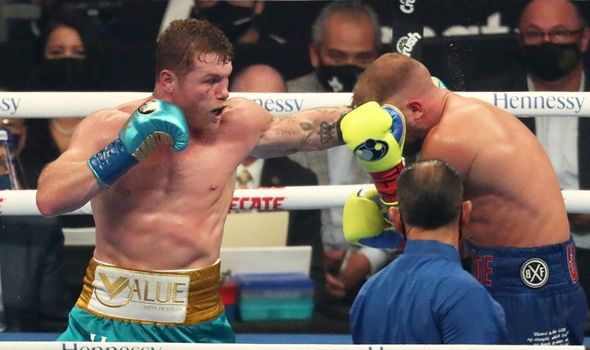 The confidence was oozing from the fluid Saunders in the fifth, as he began to up the tempo, landing a double jab and overhand left on the break, in his best round of the fight so far.

Saunders now felt in control as he revved up the crowd at the start of round six before waving on Canelo and dangling his tongue at his opponent, who was looking to claw back momentum amid the power shift.

The 31-year-old was continuing to replicate the movement and elements of Erislandy Lara’s game plan in one of Canelo’s closest fights to date, as Saunders continued to flick his jab and move around the 22ft ring he campaigned so desperately for.

Canelo, who predicted a knockout in round eight or nine, was like a matador