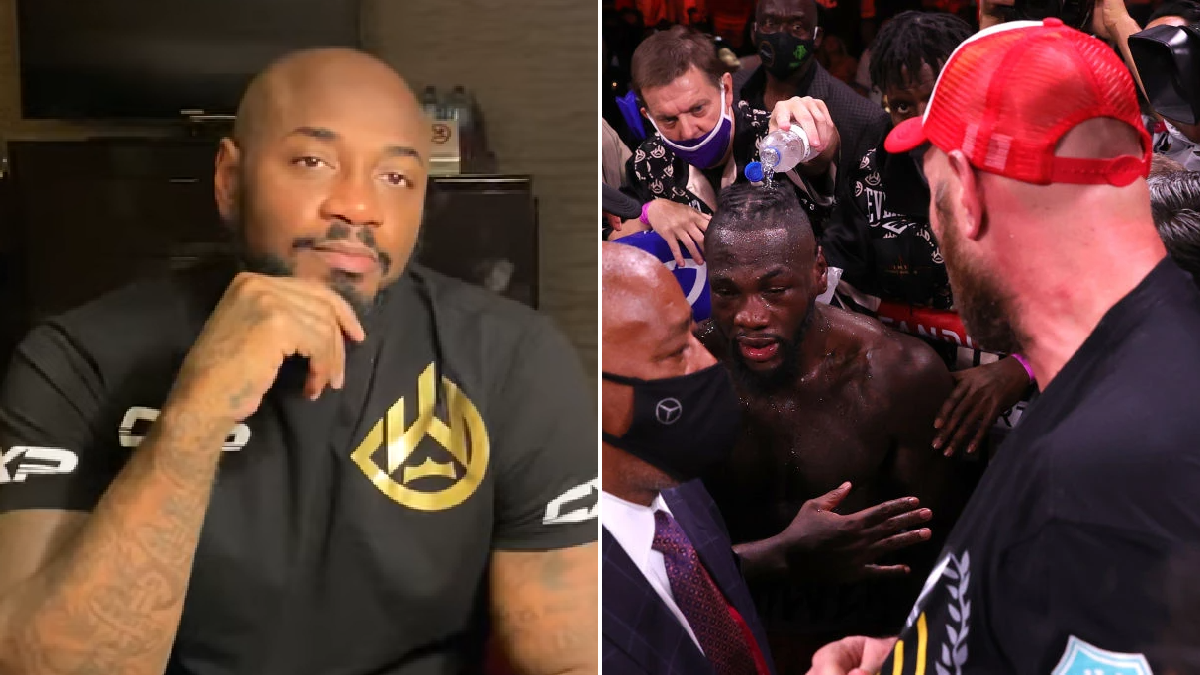 Deontay Wilder’s trainer, Malik Scott, says the defeated American still harbours doubts about the legitimacy of Tyson Fury’s victories, while he revealed that the Bronze Bomber broke a bone in his hand during Saturday’s fight.

The two heavyweights went toe-to-toe in an all-time classic in Las Vegas as the Gypsy King defended his WBC crown despite being knocked down twice, eventually brutally stopping Wilder in the 11th round.

Both boxers had goaded one another in an extremely heated build-up to the fight and the animosity continued afterwards when Wilder refused to shake Fury’s hand, saying he did not ‘respect’ the lineal champ.

While trainer Scott was far more gracious in his praise of Fury afterwards, he says Wilder is still totally convinced by the accusations he has thrown at his opponent – such as putting weights in his gloves – and cannot simply forgive and forget.

‘After they released that energy, all that tension, he still felt the way he felt.

‘When he left the ring and I was following him out, I was going to go shake the competitor’s hand and just tell him you know, “Good fight man”.

‘And when I say the competitors I don’t just mean Tyson Fury, I mean SugarHill, who I always had a great relationship with, he’s a great trainer and I said that even in the build-up, a very good dude.’

Wilder was taken to hospital after the fight but Scott says he is doing well, continuing: ‘He’s good. He’s up in his room, I took him up into his room.

‘He’s seen the doctor afterwards, everything is cool with him. He’s got a busted lip, he broke his hand, his finger or something like that is broken. But life goes on.

‘I really don’t want Deontay talking about boxing, doing nothing with boxing for quite some time. I want him to get some good rest, especially after this. Because even after the last fight he was so worked up over time and in training and then was just so excited with the arbitration.

‘He never really got to rest. He deserved a good rest and I’m gonna make sure he gets it. I’m going to head back down to Tuscaloosa in a couple of days just to spend some time with him.’

‘I told him in the first round how he came out, he did great, he did everything we worked on, he took control of the centre of the ring. I told him things I didn’t like that we’ve got to continue to work on.

‘I told him all the plusses and all the minuses in a short, little time, for like 45 minutes straight I talked to him while we were at the doctors just getting checked out.

‘He didn’t say much back, he was just like “Uh-huh”. But at the start he was like “Bro just run it back to me, how was it? Where did I go wrong?” And of course I’m going to tell him everything we did wrong and everything we did right.

‘I just wanted to give him a quick run. Tomorrow I’ll go up and have breakfast with him and we’ll come up with another plan.’