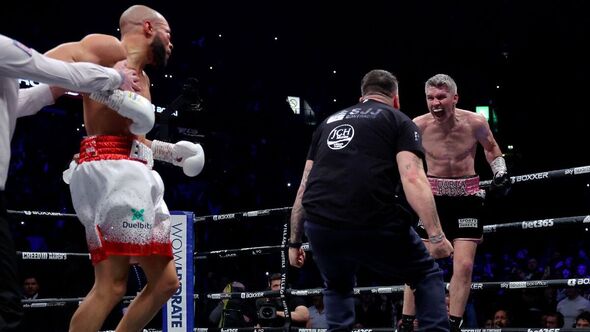 Chris Eubank Jr nearly punched Liam Smith after being savagely knocked out by the Scouser. Next Gen was so badly concussed by Smith’s heavy blows that he wasn’t certain the fight had ended after referee Victor Loughlin stepped in and called a halt to proceedings.

Despite a bright start, the Brighton boxer was downed early in the fourth round as Smith backed his rival up into the corner and landed a series of hard shots finished off by a right uppercut, left hook combination.

The 33-year-old made his way to his feet but when he did it was clear he was on unsteady legs as he stumbled around the ring. When the action was restarted, Smith caught Eubank Jr with a clubbing right that sent him tumbling to the canvas again where the fight was waved off.

But Eubank Jr, still wobbled by the shots, and clearly unaware that the fight had finished, charged at Smith with a wound-up right hand before being pulled away by his opponent’s trainer, Joe McNally. To Smith’s credit, he didn’t retaliate and instead continued with his celebrations.

After an ugly build-up which saw Sky Sports forced to apologise for homophobic comments made in their final press conference, Eubank Jr and Smith showed genuine respect to each other post-fight.

Approaching Smith with a much clearer head, Eubank Jr embraced his rival and was quick to congratulate him on his upset win. “Listen, big congratulations to him,” he said. “I felt like I could have gone on but he caught me with a great shot.

“The build-up was the build-up, it got a bit ugly in the end, I regretted that and I respect you and I respect your family. I will return. If the fans want a rematch we can get it on at Anfield but big respect man, I appreciate it.”

Eubank Jr is understood to have a rematch clause in the contract and is looking likely to exercise it judging from his words in the aftermath.

When asked about the possibility of running back the domestic grudge match, Smith replied: “If Chris wants the rematch, I agreed to the rematch clause so that’s down to Chris and Chris’ team. If not, then we move on but I’m in a very good position now at 160 and 154 so in the next month or two we’ve got big decisions to make.”