The UFC lightweight division is as messy as it is stacked with stars — and Conor McGregor could be the one to benefit despite having a losing record at 155 pounds.

A combination of factors – including long-reigning champion Khabib Nurmagomedov’s pending retirement, the UFC’s decision not to make the fight between McGregor and Dustin Poirier at UFC 257 for the title and McGregor’s shattering knockout defeat last month — have combined to leave the division without an obvious way forward.

Poirier no doubt holds the keys after adding McGregor’s scalp to a list that includes fellow contenders Dan Hooker and Justin Gaethje, but the Irishman still looms large because of the tantalising financial gain he offers any opponent. And at age 32 with a young son and 34 fights under his belt, money is obviously on Poirier’s mind.

When the UFC officially gives up on trying to coax Khabib back into the Octagon, it would likely want Poirier to fight for the title against the red-hot Charles Oliveira or division newcomer Michael Chandler.

But that plan of attack has been thrown into chaos by recent comments by Poirier. 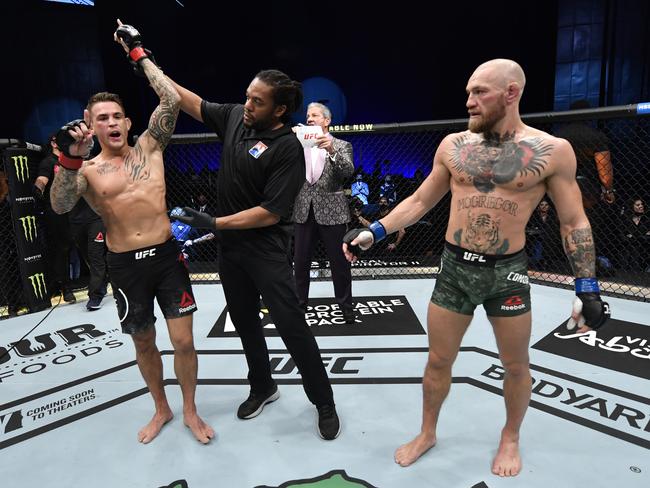 The Louisiana native immediately shot down the idea of fighting Chandler, who impressed on debut at UFC 257 with a first-round finish of Hooker.

“Respect to Chandler, great win,” Poirier said. “But to come in and beat a guy I just beat and get a title shot, dude, I’ve been in – what is this? – 27, 28 fights in the UFC trying everything, fighting the toughest guys to get my hands on gold … That doesn’t really interest me at this point. I’ll go and sell hot sauce if that’s the case.”

Poirier believes Oliveira has a stronger case for a title shot after winning his past eight fights, including a one-sided beating of long-time contender Tony Ferguson in his last outing.

Let's clash for this crown. Winner takes all, and becomes the King of Lightweight division https://t.co/fGJd6OlvIX

But the Brazilian faces the same problem many dangerous but relatively low-profile fighters face in securing a shot at the belt — he’s not going to line Poirier’s pockets.

Poirier is so uninspired he’s willing to step aside and give up the title shot he’s undoubtedly earned.

That might be the sound of a man who is still only a week-and-a-half removed from a gruelling fight preparation and weight cut, but it also could be a signal Poirier would rather a big money trilogy fight with McGregor than a UFC title he’d be confident of picking up later.

There is one other option. 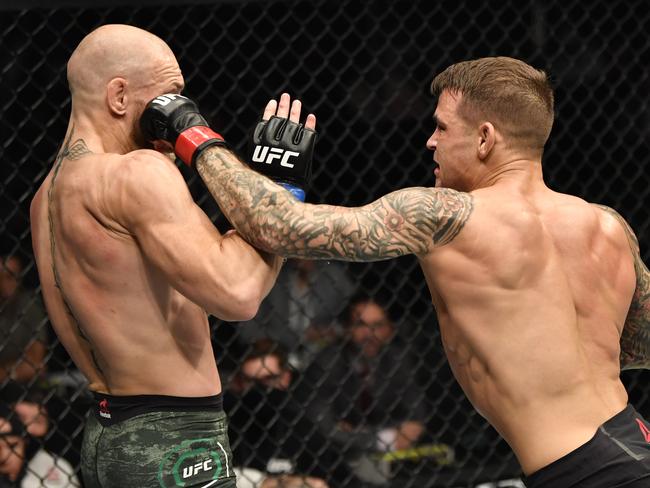 The UFC could argue Poirier and McGregor are 1-1 — and when Khabib is officially out of the way their third bout could be for the belt.

That satisfies Poirier with both the title shot and pay cheque he deserves and McGregor would no doubt be quick to sign up too.

But it would likely infuriate plenty of fighters on the roster and many fans — as ESPN’s Brett Okamoto argued.

“You know if Poirier fights McGregor again, there will likely be a UFC championship attached to it, and we both know, as amazing as McGregor’s career has been and as popular as he is, he shouldn’t be fighting for a UFC title in his next bout,” Okamoto said. “I don’t even have him ranked inside the top 10 at lightweight right now. He hasn’t won a 155-pound fight since 2016.”

But still, it appears, the division can’t move on without him.