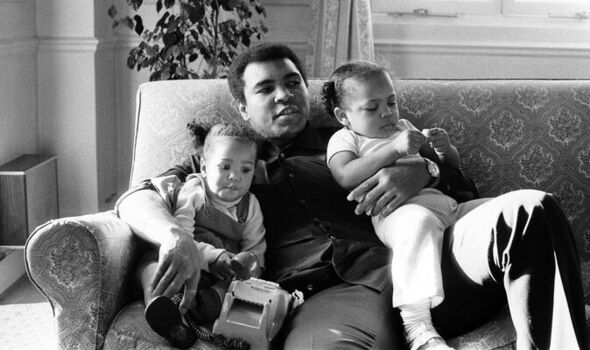 The three times undisputed heavyweight boxing champion – nicknamed The Greatest – died on June 3, 2016, a day after being admitted to a hospital in Scottsdale, Arizona, with a respiratory illness. The father-of-nine, who had been married four times, was 74 and had suffered from Parkinson’s disease for 32 years.

He would have celebrated his 80th birthday this year.

As one of the most significant and celebrated sporting figures of the 20th century his legacy is a source of pride for his family.

Hana says: “Our father gave us so much joy. I knew from an early age he wasn’t just my dad, but we had to share him with the world.

“I’m OK with that. I stopped fearing death when he went to the other side.”

Hana, 46, who is married to mixed martial artist Kevin Casey, says she misses her father’s hugs.

“I can’t hug him so I hug my husband Kevin and I close my eyes and think it’s Daddy that I’m hugging.

“Or I have a teddy bear on my pillow and think it’s my dad. My dad gave the best hugs anyone gave. I miss hugging him and kissing his head.”

Hana also has fond memories of her father’s humility, which he taught to his seven daughters and two sons from an early age.

She says: “One of the most beneficial life lessons, spiritual lessons, was to treat everyone with kindness and respect.

“When we were growing up we knew our father was special.

“Everywhere we went with him he was always received with so much love and joy, people were always catering to him and giving him things.

“When we grew up and we saw this, we didn’t know anything different in the world. He would sit us down and tell us that the world will treat us better because our father was Muhammad Ali.

“But the only thing that makes you greater than any other person in this world is not your wealth, he said, it’s not your fame, it isn’t your position, race or your colour, but it’s your heart.

“How big your heart is, how kind you are, how open you are to giving and how caring you are. So he taught us that.. and to remember everybody has problems and just accept all the feelings – don’t be afraid of the pain.

“Let yourself cry out, certainly not to hold on to it, let it pass through because it’s all an experience and nothing lasts forever.

“To live in the moment and be kind to people, that’s the only thing you were sent on this Earth to do – he believed this life was temporary and the after life is some- thing we should strive for.” It seemed Ali’s generosity extended to everyone – Hana would often come home from school to find him entertaining and feeding homeless people.

She says: “I used to tell my father he was a big bowl of love – an angel on Earth. He was here to teach some great lessons and probably didn’t even realise it.

“I would come home from school and there would be total strangers, homeless families on his sofa in his office and he’d be performing magic tricks for them.

“Or he would be driving down the street in LA and there would be a homeless man and he’d let him sit on the back seat of his Rolls-Royce, I’m not kidding you.

“He would go to a diner with the man and we’d sit there at the table with him, and our dad would pay for the man to eat.”

Hana adds: “I learned the great lessons of humanity from my father. He said people go to school for years to learn to be doctors and lawyers, but they don’t put any effort into being a decent person.

“He cared about others. The trick is not to brag about it to others because then you’re getting some kind of recognition for it and it’s not truly giving. We learned this early on in life when we were five years old. My sister Laila and I would go out with our allowance and give it to homeless people.”

Born Cassius Marcellus Clay Jr in Louisville, Kentucky, on January 17, 1942, Ali won a gold medal in the light heavyweight division at the 1960 Olympics in Rome and turned professional later that year, aged 18.

He became a Muslim the following year and won his first heavyweight title aged just 22 against the great Sonny Liston in 1964, the year in which he renounced his birth name as a “slave name” and formally became Muhammad Ali.

A 61-fight career that featured highly publicised rivalries with Liston, Joe Frazier, whom he fought INTHE Fight of the Century and The Thrilla in Manila, and George Foreman, the Rumble in the Jungle, has resulted in Ali being widely viewed as the greatest heavyweight boxer in history.

But his actions out of the ring as a conscientious objector to the Vietnam War, which cost him four years of his peak career, and as a high-profile figure in the civil rights movement for African Americans, saw him transcend sport. Hana reveals her father also suffered from fears which he refused to give in to, such as a fear of flying.

She says: “My father didn’t like to fly and the first time he got on a plane to go to the Olympics he took a backpack with a parachute so if the plane was going down he’d jump out of the window. It was so funny. He never liked flying but he still faced his fears.”

Ali, portrayed by Will Smith in the 2001 biopic, never complained about his Parkinson’s. He told Hana his “suffering from Parkinson’s is for my sins on Earth”.

She adds: “He would get fan mail and people would write in saying, ‘I have the Muhammad Ali Syndrome. I feel like I’m not alone.The Greatest Man on Earth is going through the same thing I’m going through’.

“Even in his illness he inspired people, his journey on this Earth.

“So, he never questioned that, he never complained.

“It was amazing how he never complained about physical pain.

“He found a way to keep on going and life was all the blessings he had.”

At Home With Muhammad Ali by Hana Ali ( £10.99) available in bookshops