Oleksandr Usyk has spoken for the first time about fighting for Ukraine as well as against Anthony Joshua, but is still lost for words when his children quiz him about the war.

‘My kids are asking why they want to kill us?’ says the national hero, who dethroned Joshua as world heavyweight champion before taking up arms against Russia. 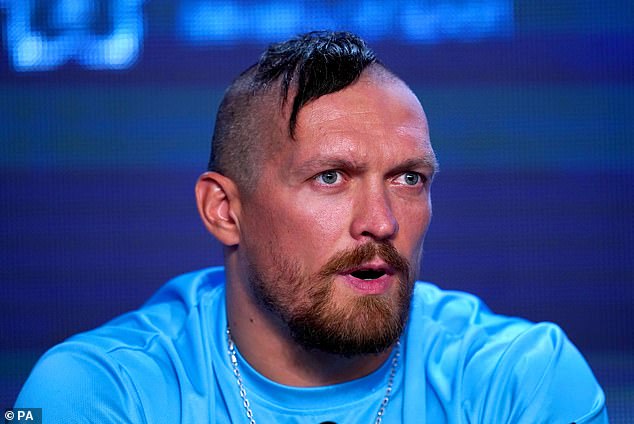 He is nonplussed, also, when questioned about how the trauma of battling Vladimir Putin’s invasion has impacted on this engaging character — and his quirky one-line quips.

What he can quantify is how he was persuaded to depart from his post In Kyiv’s defence force in order to face Joshua in their overdue rematch.

As he passed through London en route to that engagement in Saudi Arabia on August 20, Usyk said of that heart-rending decision: ‘I did not want to leave my city. I really did not want to leave my country. But when I went to the hospitals where our wounded soldiers are being rehabilitated they told me to go. Go to fight this fight not only for your pride but for Ukraine. You will do even more for our country fighting in the ring than fighting here.

‘So now I want to bring some kind of joy to those soldiers and to those staying in the front line by doing what I do.’ Then he reveals: ‘Immediately after I defend my titles against Joshua I plan to return to Kyiv. I must be in my country..’ 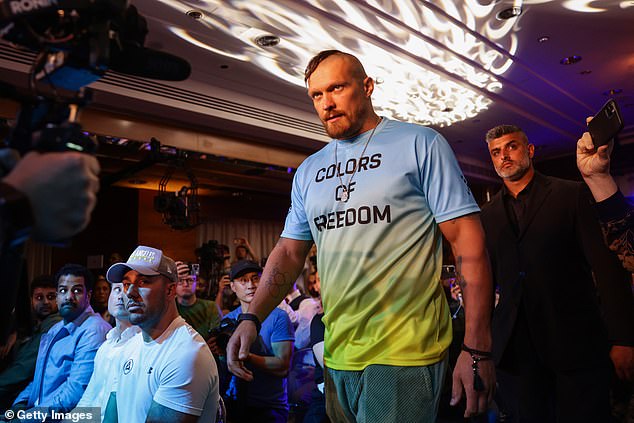 Usyk wearing a yellow and blue shirt emblazoned with the logo: ‘Colors Of Freedom’

Permission for him to take leave from action was endorsed by President Zelensky and the two Klitsckho brothers who preceded him in bringing the world heavyweight title to Ukraine, one of whom is now mayor Kyiv.

The significance of his boxing to their world-wide propaganda effort becomes even clearer as Usyk himself says: ‘When I return there no-one will allow me to go to the front line.’

The prime reason for that is the firm expectation that if he defeats Joshua a second time he will be heading out again for an even more humungous fight in front of a global audience against Tyson Fury, to decide which of them becomes the first undisputed world heavyweight champion since Lennox Lewis.

Although Fury sends mixed messages about coming back from hasty and premature retirement he is known to be engaged in financially sky-high negotiations to fight the winner of Usyk-Joshua 11.

And Usyk confirms now: ‘Oh, I know we are going to be fighting each other.’ Probably back in Saudi Arabia in December.

All of which helps alleviate his acute dilemma as a high-profile individual who was born in Crimea when that peninsula was part of the Soviet Union, whose first language is Russian, who switched solely to Ukraine citizenship only after the invasion. 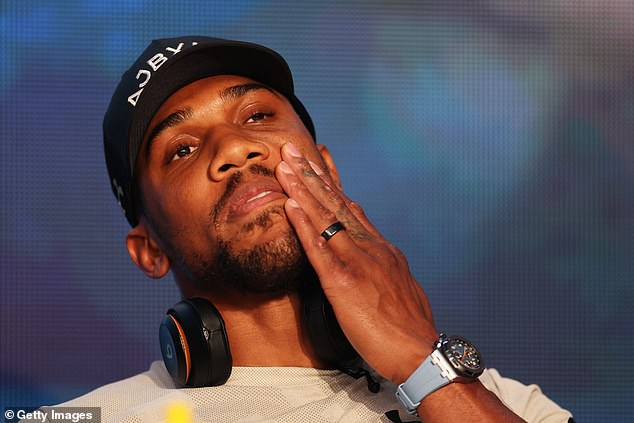 Not least this hope that he will not have to shoot a Russian soldier: ‘Every day I was on patrol I was praying Please God don’t let anybody try to kill me. But also praying please God don’t let me have to shoot any other human being. Which I knew I would have to do if I felt my life in jeopardy, my family’s life in jeopardy and a danger that everything I have accomplished in my life could be gone in one second.’

So difficult was his position that for some time after Putin annexed Crimea he deflected political questions by saying only: ‘Crimea belongs to God.’ That, a further reflection of his profound Christian faith.

Now, for this visit to London, he wears a yellow and blue shirt emblazoned with this logo: ‘Colors Of Freedom.’ And he has this to say about Russia’s view of the war: ‘I don’t trust a word they say. What they are saying on TV there is not the truth. They show themselves bombing battalions of soldiers but they do not show the bombing of civilians in their houses and in that shopping mall they hit the other day.’

Usyk’s own house has been subjected to attack and occupation. He says: ‘Russian soldiers broke in. They did damage to create living space and stayed there for some days.’ 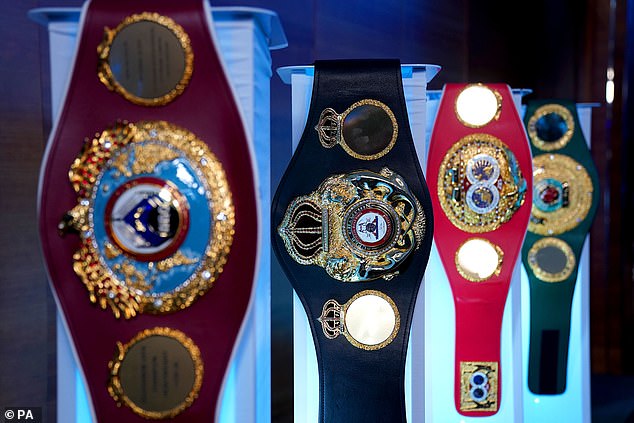 Usyk will return to Ukraine following the defence of his WBA, IBF and WBO heavyweight belts

Mercifully that came after not only he but also his family left Ukraine, although he adds: ‘It is my hope to return to living in my country, my city, my house.’

Meanwhile he keeps ‘in almost hourly contact with all my friends who are there living and some fighting to know they are okay.’ That dialogue continue via text messages which flood his phone during this interview.

Even so, he strives to separate the battlefield from the prize-ring, saying: ‘It would be crazy to motivate myself for a boxing match by what is happening in Ukraine. When it comes to my professional preparation and then this fight as part of my aim of becoming the undisputed heavyweight champion I cannot be distracted. Although I will be following everything that is happening every day until the fight I am working hard. The only real change to my routine is that my wife and children are living at the moment in different places outside Ukraine.

Usyk never has lived extravagantly. He explains: ‘I do have some nice watches, a nice car, the nice ring I got when I married my wife. But any other jewellery I wear is religious and I don’t need more possessions. My wife and kids are my diamons. I like the simple life.’

One to which he prays to God he and his family will return the moment Putin’s War is over.