Home » Fighting » Savannah Marshall: Claressa Shields' ignorance will be her downfall in boxing 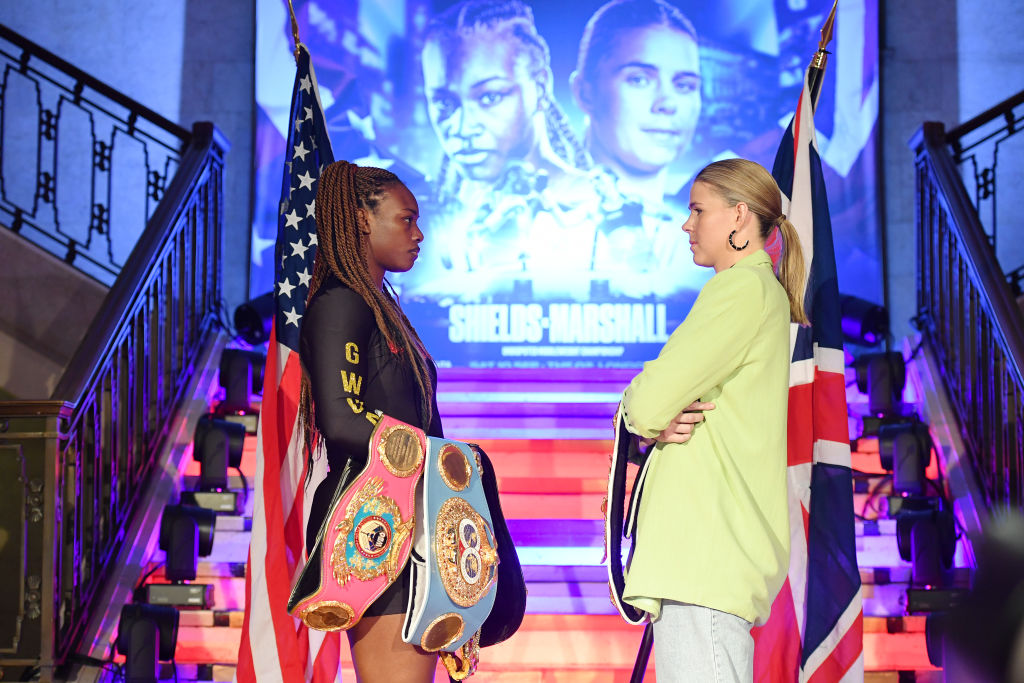 Savannah Marshall has been living in Claressa Shields’ head for a decade. The American’s defeat to her rival in their now infamous amateur clash in 2012 serves as the only blemish on her otherwise perfect boxing record. No other woman, in the amateur or professional code, has beaten her.

But despite the extraordinary success of two Olympic gold medals, world titles in three different weight classes and two undisputed title reigns, the memory of that defeat in China still burns deep.

‘You can see what the one single defeat has done to her over the last 10 years,’ Marshall said. ‘You only have to mention it and she goes from 0-10. It was an amateur fight. I get accused of holding onto this one amateur fight. But to be honest, I couldn’t care less. I was beaten plenty of times an amateur. But look at the reaction I am getting out of her. Of course I’m going to hold onto that.’

An intense and bitter rivalry comes to a head on Saturday as WBO champion Marshall is finally reunited with IBF, WBA and WBC queen Shields in the ring to crown an undisputed middleweight champion, headlining the first ever all-female boxing card at the O2 Arena. It comes almost five weeks later than billed after their original date was postponed following the death of Queen Elizabeth II.

The two couldn’t be more different; Shields, outspoken and brash and Marshall, softly-spoken but quietly confident.

The noise has been constant for Marshall, who was accused of exaggerating an injury earlier this year in order to ‘buy more time’. While Shields scooped Olympic gold in 2012 and 2016, Marshall, a Commonwealth, European and world champion at amateur level, fell at the first hurdle on both occasions. Something Shields never tires of reminding her of.

While her in-ring achievements make Shields among the most decorated fighters in the sport, Marshall insists her flaws outside of it mean she may never be looked at as an all-time great.

‘It’s her ignorance,’ Marshall said when asked to identify Shields’ biggest flaw. ‘She is a very ignorant person and I think this will be the downfall of her whole career. When we talk about who is the top of women’s boxing, we always mention Katie Taylor, we don’t mention Claressa Shields. It is the ignorance and attitude.

‘I think she’s just an angry person. Anytime you look at her social media, anytime someone says something she doesn’t like she flies off the handle and blocks them. She has been angry all throughout this build-up but I think that is just her on a normal day.’

Shields vs Marshall is viewed as a true 50-50 contest but for all her sublime technical skill and world level experience, the American’s power fails to measure up to that of Marshall, ‘the hardest female puncher in history’, according to her trainer Peter Fury. 10 of Marshall’s 12 opponents to date have failed to hear the final bell.

Shields, as she has done throughout her career, is confident her boxing ability will shine through. Her opponent might favour a war.

‘I do think it will be quite tactical,’ Marshall said. ‘When have we ever seen Claressa in a war? She doesn’t like a belter. She likes it her way, she doesn’t like getting hit.

‘I believe every woman can punch. I genuinely do. I just don’t believe many women punch properly. And that is where Peter has been a God send for me. He’s taught me how to punch properly. But to get that punch off, you have to take risks. Is she a risk taker? we will have to see.’

Despite that Olympic disappointment, Marshall’s professional career began in remarkable fashion, signed by Floyd Mayweather’s Mayweather Promotions and debuting on the boxing legend’s clash against Conor McGregor in 2017.

But while Shields’ professional path would be laden with world title fights, Marshall was left questioning her role in the sport shortly after as the Covid pandemic took grip in 2020.

A maiden world title fight in April that year was title was called off as boxing came to a halt and the Hartlepool fighter found herself applying for jobs in supermarkets to make ends meet.

The guidance of her trainer Peter Fury proved vital during those dark days with the 31-year-old not sure where she would be now without his support and advice.

‘When I sit and think about that time, I remember I was sat there thinking, “why I am I not getting that chance. Why isn’t it me fighting in Eddie Hearn’s back garden? What makes me so different from these other girls?”

The amateur fight 10 years ago has been a constant talking point in the weeks and months building up to fight week. Has Marshall cast her eye back on it?

‘I actually watched that fight the other day and it is so obvious that I’m now a completely different fighter. I was a well-rounded amateur back then, a typical amateur. it was a long time ago, she was 17, I was 20, we were babies really.’

Fast forward a decade and both Shields and Marshall are set for a career-best payday with a irrefutably genuine rivalry taking centre stage in London. Such are the stakes and the animosity between the two, this is unlikely to be the final chapter.

‘I would 100 per cent would welcome a rematch, whatever happens,’ Marshall said. ‘At the end of the day, boxing is a business and we are getting paid a lot of money for this fight, we are never going to get a payday like this against anyone else again and I can comfortably say that.

Because of the story, the background, because of where we are both from, our personalities. It’s all there. And I would welcome the trilogy.’