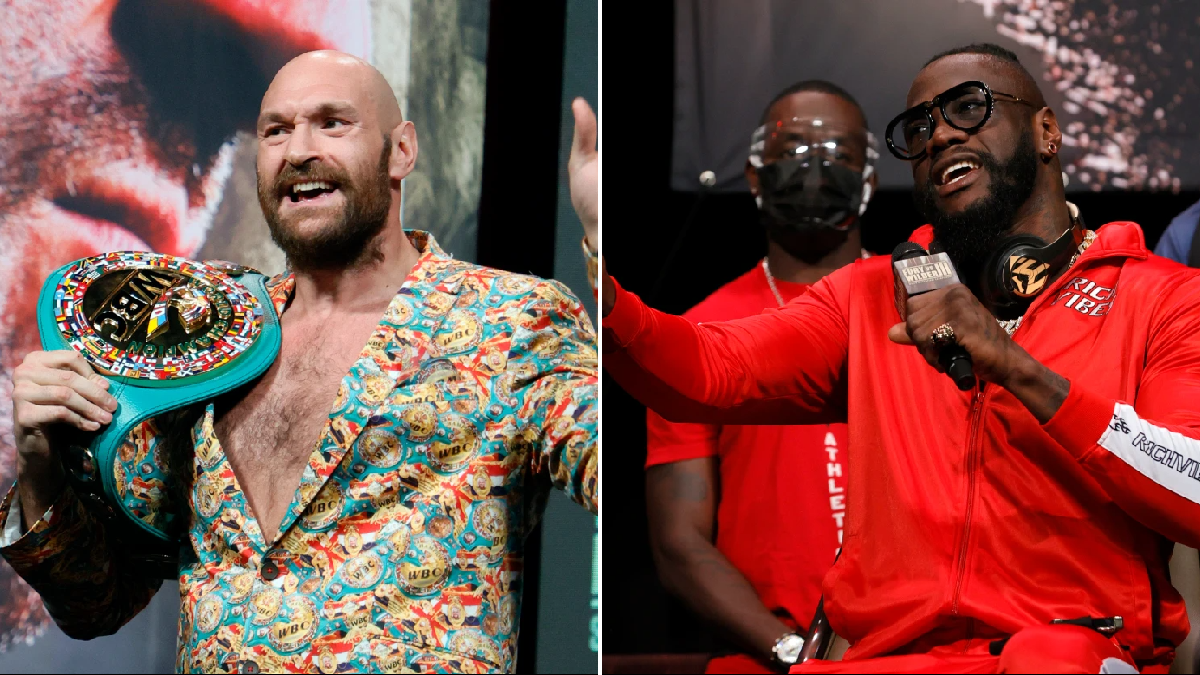 Tyson Fury hit back at Deontay Wilder’s accusations he ‘cheated’ in their previous fight as tensions boiled over in the final press conference before Saturday’s trilogy bout.

The ‘Gypsy King’ and the ‘Bronze Bomber’ will lock horns for a third time in Las Vegas this weekend as the latter looks to avenge his defeat and win back his WBC belt having suffered a seventh-round stoppage 20 months ago, after the pair first fought to a split draw in December 2018.

Wilder has accused Fury of ‘cheating’ in their last bout, suggesting the Brit concealed small weights in his gloves to deal extra damage while he also alleged that his water was spiked with muscle relaxers.

Fury strongly denies the claims and in their final face-to-face meeting he slammed his opponent’s many ‘excuses.’

‘I don’t care because it is obviously coming from an unwell person – he accused me of everything, his team, trainer, the suit [he wore on the way to the ring], injuries, the Athletic State Commission of Nevada, the ref – if he had come out with one excuse it might have been believable,’ he said.

‘What it tells me is he is a weak person who I am going to knock spark out on Saturday night.

‘He is even copying me, he’s got no T-shirt on today. I am famous for wearing no shirts in press conference – I know I am an inspiring person, but you are supposed to be the Bronze Bomber, do your own thing.’

Wilder has previously offered up very little chat in their recent press conferences in the build up to this weekend’s scrap but gave Fury plenty of trash talking in Wednesday’s meeting and doubled down on his cheating accusations.

‘I don’t regret it, I will go to my grave believing in what I believe in,’ the Bronze Bomber said.

‘One thing about it, men lie, women lie, but your eyes don’t lie what you see – people can believe what they want, but the eyes don’t lie and it only made me better as a man to see certain facts, it made me hungrier than before.

‘I wouldn’t take it back, I needed it, it was a blessing in disguise.’

The final five minutes of the press conference involved both fighters shouting at each other, eager to get their point across as Fury responded once again to the cheating accusations.

‘There’s something I need to say, Wilder said I only won the second fight because I cheated, but then he changes his whole team, trains as hard as he ever has,’ Fury said.

‘I ask, if I only won because I cheated, what was the point of changing everything? No one can answer, so have egg in your face.

‘He says he wants to do bad things to me and hurt me, for those who hold a hot coal with the intention of throwing it at somebody, they are the ones who get burned. I don’t want to hurt Deontay Wilder, I just want to beat him in a fight.

‘Guess what, after this fight you will be back at the fast food chain you were working at early in your career.’

With time running out, boxing presenter Kate Abdo then called both fighters to the middle of the stage for the final face-off.

However, she claimed, along with journalists present at the venue, Fury’s promoter Bob Arum then said ‘no’ to it and called Fury away as Wilder exited the stage.

It’s unclear as to why their final face-off was seemingly banned by Arum but with tensions high it was probably a wise decision to avoid any potential physical confrontation.