Collin Morikawa on winning the US PGA Championship

Brooks Koepka clearly wasn’t the fans’ favourite to win the PGA Championship on the first tee. The four-time major winner was grouped with overnight leader Phil Mickelson for the final round.

Mickelson has looked solid all week long with supporters growing with anticipation on seeing him win his first major since 2013.

And for a short period on Saturday, it looked as though he’d run away with it after scoring five birdies through the first 10 holes.

A bogey and a double bogey followed on holes 12 and 13 though to give the chasing pack a glimmer of hope.

Koepka meanwhile had another steady round of two-under par to leave him just one back from Mickelson at the end of play on Saturday. 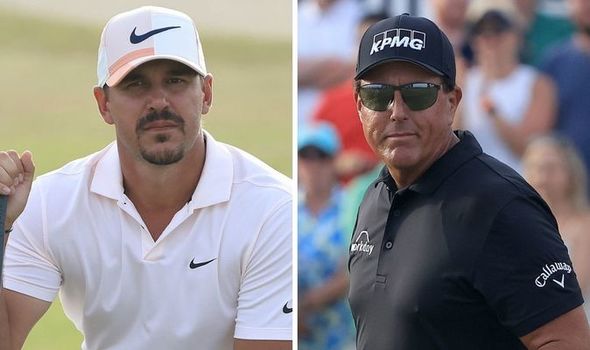 It meant the two Americans were to be in the final pairing on Sunday and spectators at the Kiawah Island course packed into the first tee to see them in action.

Mickelson was announced first to raptuous cheers from those who managed to stand by the tee box.

And they threw their support behind the 50-year-old when he smashed his driver down the left side of the fairway.

Koepka was up next though and there was a spatter of booes from the crowd as he stepped up to the tee.

The rough response from the crowd didn’t appear to affect Koepka as he perfectly placed his drive up the right side of the fairway.

It was all down to the second shot for the pair and Koepka set the tone early with an excellent shot to within 12 feet.

Mickelson was unable to match his playing partner though and ended up three putting to register a bogey to open his round.

And Koepka took the chance straight away for a two-shot swing to take the outright lead by holing a difficult right-to-left 12 footer.