‘It must say something about you to win back-to-back majors in play-offs’: Sir Nick Faldo on his second claiming of the Masters green jacket at Augusta 30 years ago

If you had to rank Sir Nick Faldo’s six major championship wins, his successful defence of his Masters title 30 years ago might well finish bottom of the list.

Faldo’s first Open and Masters wins were particularly memorable – he finished off with 18 pars to claim the former at Muirfield in 1987 and Scott Hoch missed a tiddler that gave him his chance at Augusta in 1989.

His other two Open wins saw Faldo wipe the floor with Greg Norman at St Andrews in 1990 and then dig deep to win at Muirfield once more in 1992. As for his final major, his merciless reeling in of Norman again at the 1996 Masters has become part of British sporting lore. 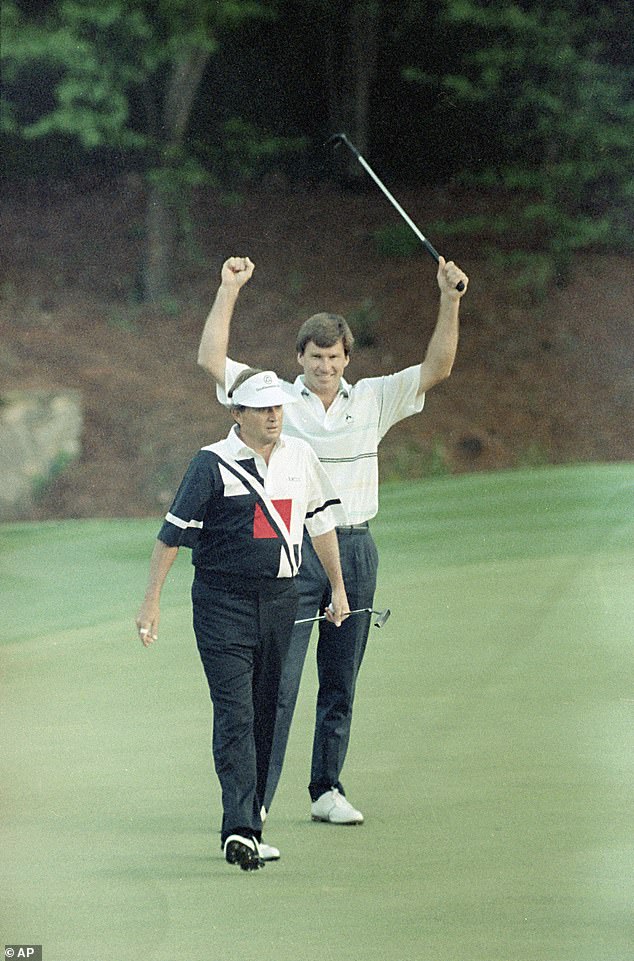 So Faldo often sees his second claiming of the green jacket neglected, although looking back offers persuasive evidence that it might be time for a revision.

Only Jack Nicklaus had won back-to-back Masters before Faldo achieved it and only Tiger Woods has done so since.

Furthermore, with a rampaging display of aggressive golf over the back nine, he caught none other than Raymond Floyd – one of the hardest American nuts.

To this day, Faldo remains the only golfer to win successive majors in extra time, and both at the 11th hole, the beautiful opener to Amen Corner. 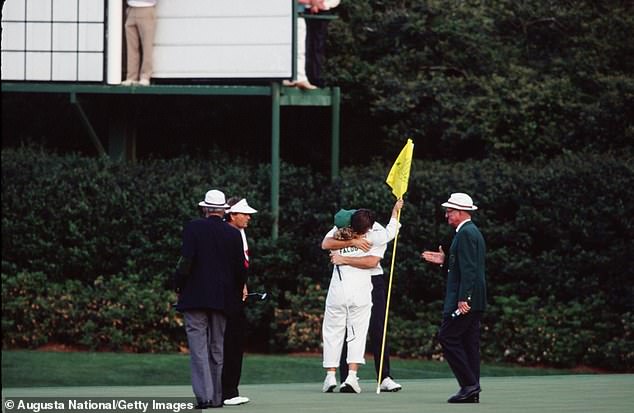 ‘I love stats like that one, it must say something about you if you can win back-to-back majors in play-offs,’ says Faldo. ‘It takes so much out of you, nobody will ever win three.’

Faldo showed up that week at Augusta with a new caddie, Fanny Sunesson. ‘I had a lot on my mind with defending the green jacket, but showing Fanny around Augusta proved to be hugely beneficial,’ recalls Faldo. ‘It really helped in terms of visualisation, walking her through each hole.’

A two-round total of 143 left Faldo five shots behind Floyd, who underlined his reputation as a front runner with a third round 68. Faldo, though, made inroads with a wonderful, bogey-free 66.

He was third heading into the final round and, on Sunday, was playing alongside Nicklaus.

Imagine how that scenario must have resonated. Nineteen years earlier, Faldo, then aged 13 and watching on television, had been inspired to take up the game after falling in love with the grace and rhythm of Nicklaus’ swing against the backdrop of Augusta. 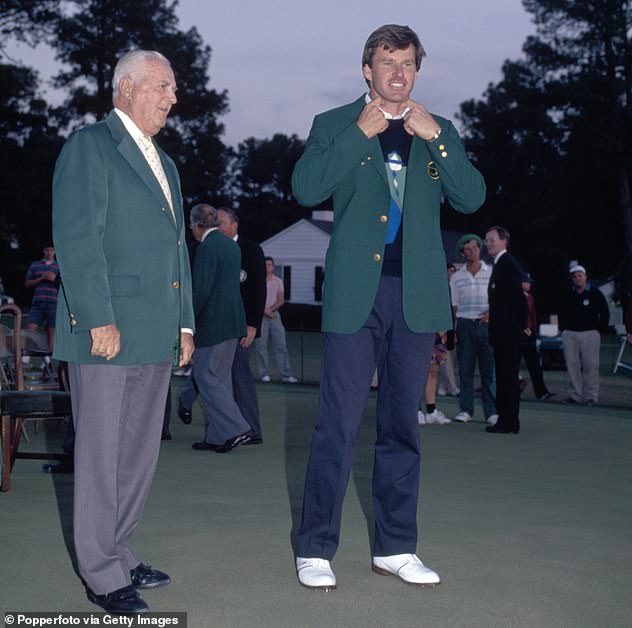 ‘I thought it was a good omen,’ says Faldo. ‘The man who’d got me interested in golf and also the only man who had successfully defended the Masters. They were good things for me to sleep on.’

On the Sunday Faldo recovered manfully from a double bogey at the first, but saw Floyd was still four ahead. Faldo got to the 12th and pulled his tee shot into the back bunker, where it plugged.

‘I’m not sure there are many scarier shots in golf than that one,’ he says. ‘All I could see was the water. The only thing in my favour, and this is a good lesson for kids, is that I’d actually practised such shots. I’d grind the ball into the sand with my heel and try to pop it out. So I tried to pop it out this time and it came out perfectly. It stopped on the fringe just short of the water and I holed the 15ft putt for par.

‘That might have been the best up and down of my career.’ In the final group, Floyd, playing conservatively, invited others to try to catch him. Faldo responded with birdies at the 13th and 15th. Then came the 16th.

‘That was positively spooky,’ he recalls. ‘The previous night I’d dreamed I had a 20ft putt for birdie and I made it. I had exactly the same putt in reality, with the same result. If you watch the film, there’s no fist pump, just a tip of the putter.’

Two pars to finish and, as he had the year before, Faldo retired to Butler’s Cabin to wait. His lead down to one stroke, Floyd pulled his approach to the par-four 17th. 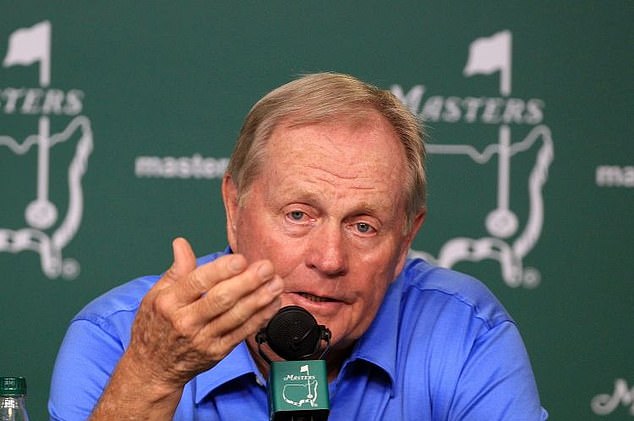 ‘The putt he left himself was brutal over several shelves and ridges,’ says Faldo. ‘There was no way he could two-putt it and he didn’t. Then he made his par at the last and we’d tied. Here we go again, I thought. Same as last year. Back to the 10th tee.’

A skied drive left Faldo with a four iron approach, which plunged into a greenside bunker. Floyd played a beauty to 15ft. Faldo came out to 3ft and holed for a par, Floyd missed.

Some of the heart seemed to leave the American after that. Faldo strode purposefully to the 11th tee.

‘It was a good up and down, and it showed him that I was feeling all right,’ says Faldo After their drives, Floyd took a bathroom break.

‘The next time I looked back he was standing over the ball and I was thinking, bloody hell, he’s about to hit it already!’ says Faldo.

‘Then he pulled it into the water and Fanny and I were trying to do the maths. What’s the best he can score?

‘It was, of course, a five, which meant I still had to find the green. My irons that week were right on the money and I hit one more solid eight iron to 20ft, and followed it with the perfect lag putt to three inches.’

Floyd was plainly devastated. ‘The hardest loss of my career,’ he would say later.

By contrast, Faldo was engulfed in a sea of emotion.

‘Fanny was in tears, I was in tears, Sir Michael Bonallack (then CEO of the R&A, who had known Faldo since he was a teenager) was in tears,’ he recalls. ‘It was quite a thing to pull it off again. Eleven is definitely my lucky number.’

Today, the solid silver replica of the Augusta National clubhouse, presented to the winner alongside the green jacket, stands on a Chinese table in Faldo’s home in Florida. ‘It’s a very impressive trophy,’ he says. ‘And there’s not a day goes by when I don’t look at it and think back.’