Just days after the biggest windfall of her career, Australian golfer Hannah Green is eyeing another prize after a hot start to the final LPGA Tour event of the year.

Green is tied for sixth at six-under-par after 18 holes at the CME Group Tour Championship in Naples, Florida, two shots off the lead alongside compatriot Minjee Lee. 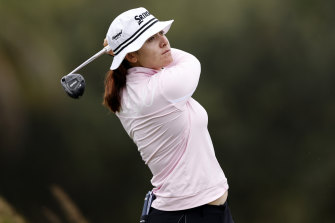 Hannah Green is in contention following the opening round of the final event of the LPGA season.Credit:Getty

South Korea’s Jeongeun Lee is the outright leader at eight-under, with countrywoman Sei Young Kim, Celine Boutier of France and American duo Mina Harigae and Jennifer Kupcho all tied for a second a shot back.

Green got under way with back-to-back birdies and was four-under at the turn. Her only dropped shot came late in the round, on the par-three 16th.

The prize is awarded to the player who records the lowest overall score on designated holes at select events. Green, who had not dropped a shot at any of the relevant holes all season, opted to sit out last week’s final tournament.

“I haven’t even made that much money over two seasons,” Green said before the Group Tour Championship.

“It’s still not quite sunk in yet. Coming down to the crunch I was nervous, it’s such a life-changing thing for us players. It gives me a little bit of comfort when I come out to play the [next] season.”

Su Oh is tied for 19th (-4) with New Zealand’s Lydia Ko among of a host of players a further shot back.