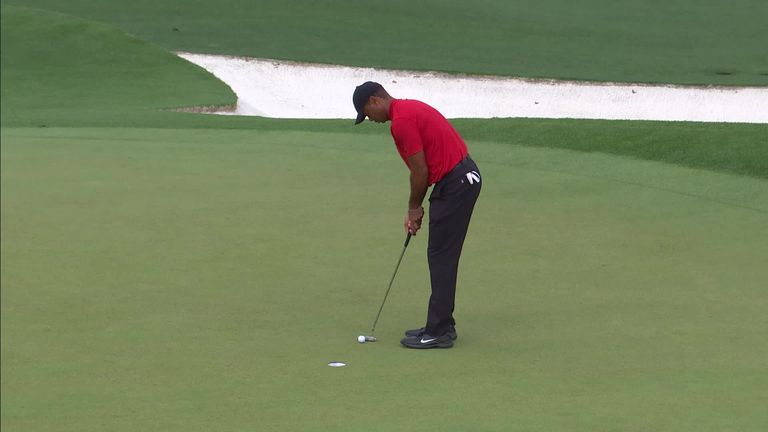 Tiger Woods delivered one of sport’s improbable comeback success stories when he ended an 11-year wait to win a 15th major with a compelling Masters victory in 2019.

The 43-year-old defied his doubters, following years of back problems in recent years and personal challenges, to celebrate an individual victory for perseverance at the scene where he won his first major in record-breaking fashion.

Woods claimed he had come “full circle” after a final-round two-under-par 70 saw him finish one shot clear of fellow Americans Dustin Johnson, Xander Schauffele and Brooks Koepka, with his children watching on behind the 18th green.

“To have my kids there, it’s come full circle. My dad was here in 1997 and now I’m the dad with two kids there,” Woods said in the immediate aftermath of his win.

“It will be up there with one of the hardest I’ve had to win because of what has transpired in the last couple of years.” Victory for Woods completed a remarkable resurgence for the American, who had contended at both The Open and PGA Championship in 2018, before he won the Tour Championship.

He began the championship with a two-under 70, which saw him mix four birdies with two bogeys, to sit in a tie for 11th place, four shots behind early pace-setters Bryson DeChambeau and Koepka.

Live From The Masters

Starting on the back nine, a two-putt birdie at the par-five 13th was then followed by another gain at the 14th after rolling in a 25-foot birdie putt, which left him tied for the lead.

He would suffer his first bogey of the round at the 17th after missing the green with his approach shot. A birdie at the par-five second, after an up and down from the right-side bunker, was cancelled out by a bogey at the long par-four fifth after an errant tee shot, before Woods closed with a birdie at the ninth.

Woods continued his strong start to the event as he recovered from two front-nine bogeys to card a four-under 68 to be in the group one shot behind the leaders – five fellow major champions, Koepka, Louis Oosthuizen, Adam Scott, Jason Day and Francesco Molinari. His first birdie of the second round came at the 240-yard par-three as he followed a precise tee shot with a seven-foot birdie putt, only for him to hand it straight back at the fifth after his tee shot found the fairway bunker.

His second dropped shot of the day would then come courtesy of a three-putt at the par-five eighth, either side of birdies at the sixth and ninth, the latter from long range, to reach the turn at three under overall.

A bogey-free back nine, in which he continued to give himself opportunities on the greens, would prove Woods was ready to challenge for the Green Jacket as he birdied the 11th, 14th and 16th to head into the weekend firmly in contention. 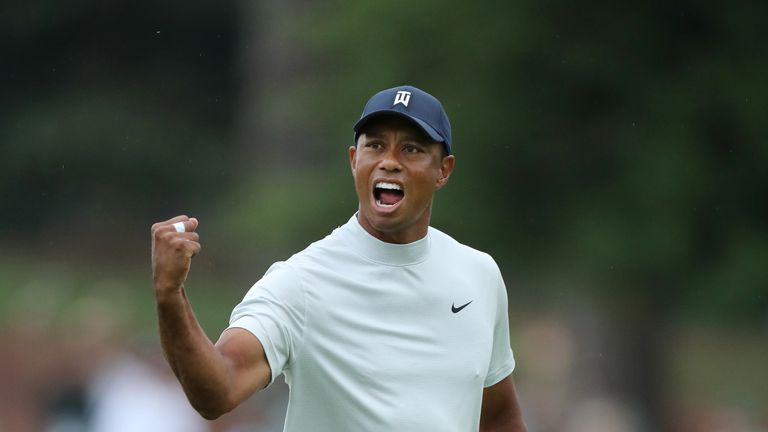 Another back-nine charge in a five-under 67 on Saturday would leave Woods two shots behind Molinari and alongside countryman Tony Finau, who had recorded an eight-under 64.

Woods was one-over through his opening five holes of the third round but then birdied the sixth, seventh and significantly the par-five eighth for the first time in the week.

After three straight pars on the back nine, Woods found himself three behind on-course leader Finau but he ignited his challenge once again with three birdies in four holes from the 13th through to the 16th to ensure he was in Sunday’s final group.

Woods had never come from behind to win a major, but he took the lead on the 15th hole of the final round, which started earlier than usual due to the threat of afternoon electrical storms, before he sealed victory amid frenzied celebrations from the patrons.

He started strongly as he moved to within one shot of Molinari’s lead with a fast birdie putt at the third, only to make back-to-back bogeys to sit three behind. However, a tap-in birdie at the seventh after a brilliant wedge shot, coupled with a first bogey from Molinari in 50 holes, reduced the deficit to one shot, which remained the case when the pair both birdied the par-five eighth.

Woods would then begin his back nine with a bogey before he birdied the par-five 12th to tie for the lead, which promptly became a two-shot solo lead after back-to-back birdies at the 15th and 16th.

A par at the 71st hole retained his two-shot advantage and despite a closing bogey, it was scenes of joy for Woods as he claimed his 81st PGA Tour title.

Related posts:
Basketball News:
Tennessee pauses activities, Barnes tests positive
Wolves vs Southampton LIVE: Team news, line-ups and more ahead of Premier League fixture tonight
Wolves vs Southampton – Premier League: live score and updates
MLB News:
What to watch for in Rams-Buccaneers on 'Monday Night Football'
Where the College Football Playoff stands after Week 12
It's time to stop sleeping on the Colts
Recent Posts
This website uses cookies to improve your user experience and to provide you with advertisements that are relevant to your interests. By continuing to browse the site you are agreeing to our use of cookies.Ok