Home » Golf » Mini-golf to the max: old game in the rough but simulators and putt-putt are in

Golf latterly has been out of bounds. That is literally so in Melbourne and a figurative reality elsewhere as the game has receded from the sporting mind’s eye behind Trumpian high fences. Now it is turning to its demographic out-of-bounds for its future. Mini-golf is about to be maximised.

“To see how many people are playing the game in its alternative forms, not playing either rounds of golf or being club members, was a bit of a ‘wow’ moment for me,” said Golf Australia chief executive James Sutherland. “There are so many.” His motto henceforth: “All golf is golf.” 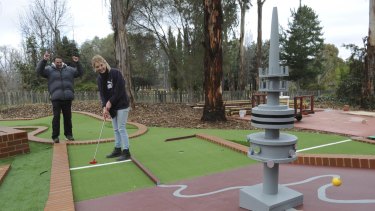 Mini golf to the max.Credit:Graham Tidy

Some findings of an industry survey to be released on Tuesday are par for the course. Nearly 80 per cent of the 380,000-strong membership of golf clubs in Australia is male and more than two-thirds are 60 or older and that’s without going into ethnicity. They are still central to the golf economy, but won’t sustain it forever.

Women and youth in the main think the game takes up too much time, is not family-friendly nor especially social, lacks excitement and in any case is inaccessible to them. Young people would prefer a shorter, faster version of the game, more casual openings and more affordable and flexible memberships.

The survey finds that golf does have star power. But that must set against the atrophying of the professional circuit here. It means golf lies 12th on a list of preferred sports to watch on TV, attracts minimal attendances to its few tournaments and earns negligible broadcast rights, leaving it with a budget one-tenth of, say, Cricket Australia’s. 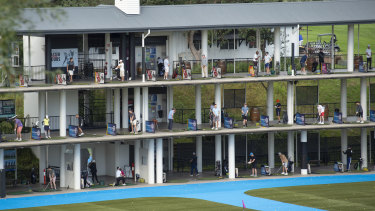 Sutherland is looking at the fairway beyond the rough. The survey reports that there are 1.245 million course players (club and public) in Australia, but nearly two million more who engage with the game in other formats. “The demographic in the alternative formats is younger and more evenly balanced from a gender perspective,” said Sutherland. 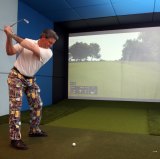 Simulators a stimulus for golf.Credit:Nine

“You have a few beers with mates after work and play Pebble Beach on a big screen,” said Sutherland. “The research highlights that people play the game for fun. It’s a reminder to all of us, including golf clubs, not to take things too seriously. That shines through.”

Among the proposals in the survey are shorter versions that take less time, more public facilities, trial memberships and for women especially, group memberships.

Further down the range, the survey shows there are nearly six million who are open to be seduced by golf. This is, if you like, golf’s T20 market and moment. “Not everyone has the privilege of walking onto a green grass golf course from the start,” Sutherland said. “It’s incumbent on the sport to think about where the next generation of golfers is coming from.” 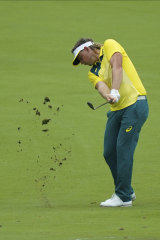 He remembers first falling for the game on a putt-putt course on the Gold Coast as a child. Now his handicap is COVID-19 stalled at six.

The survey did unearth one unexpectedly good lie: numbers have bumped up despite COVID-19, or even because of it. “Golf appears to have benefited from the fall-out of COVID-19,” it reported, “with different formats appealing to people in the search for improved mental health and social cohesion.”

Club membership, which has been falling for 20 years, is expected to rise at least five per cent this year. Sutherland said more flexible COVID-19 working hours made for more flexible playing times. Besides, there wasn’t much else to do. “Mental, physical, social: golf’s a one-stop shop,” he said.

Sutherland also wants golf to tidy up its clubhouse. The two principal bodies are GA, an umbrella organisation, and the PGA, the players’ body, and they have not always worked hand-in-hand.

But after lockdown, they will move into shared digs in Sandringham, aligning themselves with a view possibly to merging one day. Their marketing and public affairs operations already are in a trial merger. “It’s not just symbolic,” said Sutherland.