Patrick Reed is accused of ‘cheating’ AGAIN – and he then drags Rory McIlroy into the argument – after moving his ’embedded’ ball while leading the Farmers Insurance Open, despite clear video evidence showing it had bounced

Patrick Reed has become embroiled in yet more controversy, with commentators and fans lining up to accuse him of playing fast and loose with golf’s rules once again.

Reed’s sweeping of sand during practice shots in a bunker at the 2019 Hero World Challenge were widely slammed as flagrant cheating and, while criticism rained down on him again on Saturday night, he even attempted to hit back amid his latest storm by dragging Rory McIlroy into the argument.

The 30-year-old American was leading the Farmers Insurance Open at Torrey Pines when he picked up a ball he claimed was embedded below ground in thick rough, before a rules official was able to look at the ball as it lay.

The former Masters champion had hit a wild shot short and left of the green on the par-4 10th hole in his third round, and video replays showed that the ball had bounced in the rough before it came to a rest, making it all but impossible for the ball to have embedded.

Reed claimed that neither he nor his playing partners, Will Gordon and Robby Shelton, and their caddies had seen the ball bounce, and also asked a nearby tournament marshall whether she had seen his ball bounce.

The marshall was heard on TV footage saying she did not, but instead of waiting for a rules official to attend and confirm that his ball had embedded, Reed quickly marked then removed his ball himself ahead of taking a free drop in shorter grass.

Brad Fabel, a PGA Tour senior tournament official, eventually arrived on the scene and, after Reed told him that no one had seen the ball bounce, checked the ground for an indentation in the soil. He determined there was a ‘lip’ in the ground so the ball had embedded, and allowed Reed to take relief without penalty.

Reed, the world No 11, went on to par the hole and shoot a two-under-par round of 70. He is tied for the lead with Carlos Ortiz entering the final round of the prestigious tournament. He later said he had removed his ball before an official had attended for ‘pace of play purposes’.

PGA Tour officials later said Reed’s behaviour had been ‘textbook’ but there were howls of protest from those watching.

‘OK, that’s the official line because as you can imagine the rest of the world is screaming at that one,’ said Sir Nick Faldo, the expert analyst on the US broadcast.

‘The optics are not good,’ said commentator Jim Nantz. 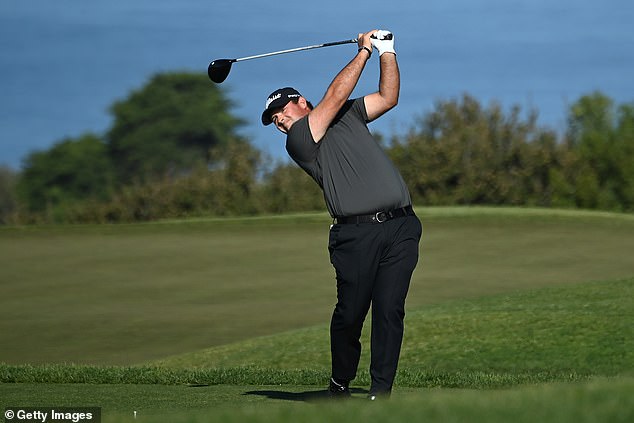 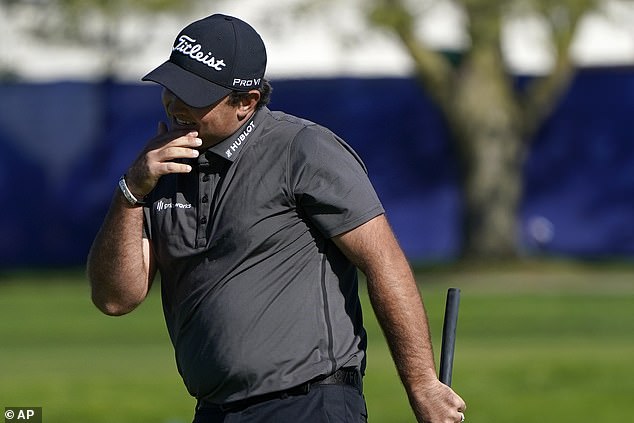 Later on Twitter Reed defended himself by insisting McIlroy had done exactly the same thing on a different hole in the same tournament. The Northern Irishman, who at seven under par is in eighth place overnight, has stayed silent on the issue.

‘RORY MCILROY @McIlroyRory DID THE SAME THING TODAY ON HOLE 18! AND DIDN’T EVEN CALL A RULES OFFICIAL OVER TO DEEM THE BALL EMBEDDED. END OF STORY,’ Reed’s tweet said Saturday night.

In his post-round interview, Reed attempted to explain his behaviour in more detail.

Reed also told the Golf Channel: ‘What a lot of the players do, as well as what I always do, is when you sit there and whether it’s an embedded ball or whether it’s a sprinkler head or anything, whenever we’re taking relief, we mark it and we check to see if it’s embedded first. Because if you lift it and you put your finger down and it’s flat down there, then you’re like, “OK, the ball’s not embedded”, you place the ball back as it lied and then you proceed on.’

As the furore over his behaviour continued, Reed later added: ‘If one fan said they saw it bounce, I never would have had to put a tee down and even check to see if it was embedded.

‘But since you have three players, three caddies and a volunteer that is probably from me to you that didn’t see the ball bounce, then you obviously are going to go off of that.’ 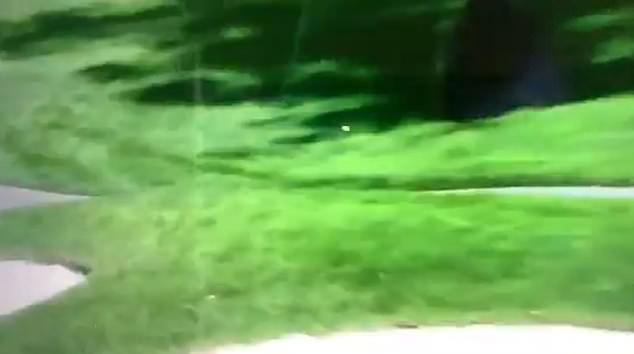 Reed’s ball could clearly be seen bouncing before settling in the rough on the par-4 10th hole in the third round, making it nearly impossible for his ball to have embedded below ground 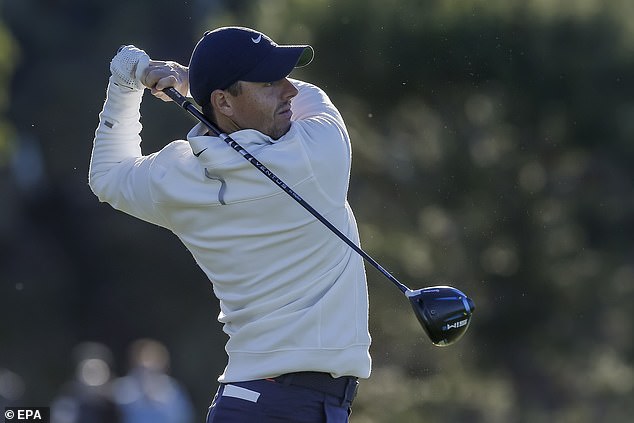 Reed dragged Rory McIlroy into the row, saying he acted in the same way on a different hole

Outspoken Golf Channel analyst Brandel Chamblee, who has been a fierce critic of Reed’s past behaviour, was damning in his verdict on Twitter, saying: ‘To suggest that because Reed’s drop mechanics were textbook exonerates him from suspicion misses the point by Phil Mickelson’s tee shot on the 18th hole at the 2006 US Open [which landed way off target]. The ball did bounce, so “virtually impossible” (to quote Reed) that it embedded. Zero chance IMO.’

He added: ‘Reed didn’t need me to incriminate him, his own words did that. He told Amanda [Balionis, the interviewer], the first thing I did was set the ball aside. Yet he palmed it/hid it. He told Todd, if it had bounced, (presumably before he knew it had in fact bounced) it’s virtually impossible it could’ve plugged.’

Golf writer Robert Lusetich said: ‘Ask yourself this: how many professional golfers have had this many rules issues? #PatrickReed is what we always thought he was.’

Another of his tweets contained the long-nosed ‘lying’ emoji.

The incident at the 2019 Hero World Challenge has stained Reed’s reputation ever since. He was caught on camera moving grains of sand on the backswing of his practice shots while in a bunker. Touching the sand in a bunker with the club is against the rules of golf, but Reed steadfastly denied he had cheated, despite clear TV evidence against him, and he was condemned widely for both his actions and denials.

Reed has also been plagued by suggestions that he was known as a cheater during his days playing college golf at Augusta State. He has denied these claims. 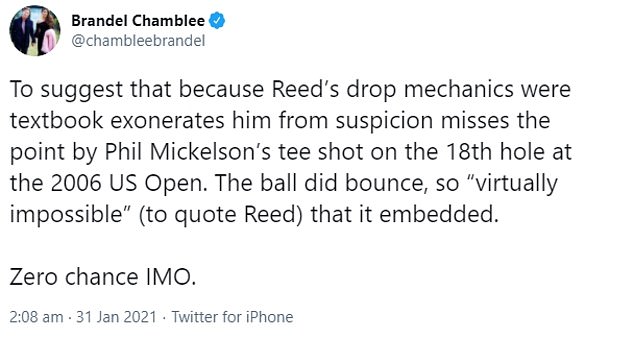 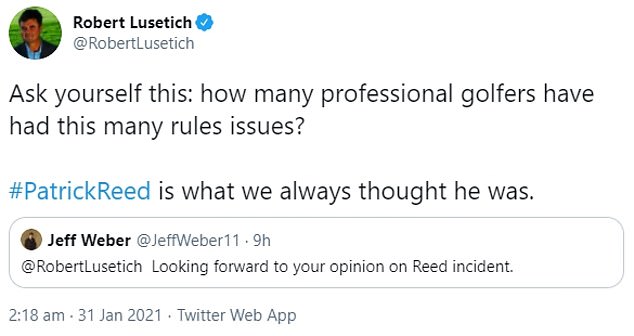 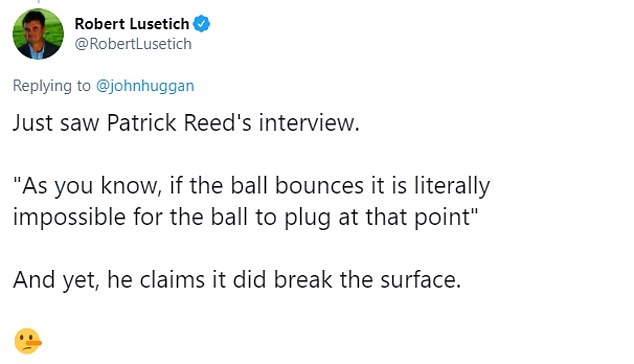 The majority of fans on social media who watched the incident at Torrey Pines were quick to judge Reed’s behaviour as cheating.

One user called Nick said: ‘Making a completely honest mistake on your scorecard and signing it is automatic disqualification in golf, but @PGATOUR is just going to let @PReedGolf play preferred lies in the rough in a Tour event as he sees fit without even a stroke penalty? Lol.’

Braden Parry said: ‘I’ve got kids that play golf and see this. What an embarrassment. Brutal lesson to those that have always been good stewards of the game. @PGATOUR do something about Patrick reed.’

Jeff List said: ‘Even if he thought and was told that it didn’t bounce – we all know that there was no way that ball was embedded after the bunny hop it took after landing….. integrity check Patrick.’

Gc said: ‘Listening to this vs what he told Golf Channel later. He’s full of it. He did hold the ball for an extended period, poked around in the area and then walked away with the ball, put it down and wiped his hand on the towel. @chambleebrandel is correct in that he was up to no good.’

Lewis “Torrey Pines” said: ‘He was caught cheating AGAIN and yet nothing is done. The ball could not have embedded from 12″ after bouncing. Hey tour… either kick him off the tour, suspend him or fine him an extraordinary amount. Protect the integrity of the game or stop pretending it exists on the tour.’ 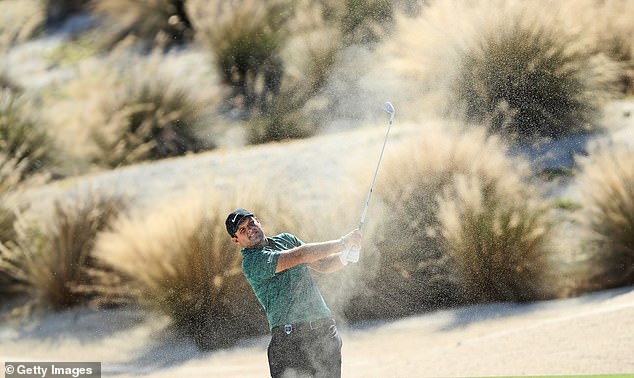 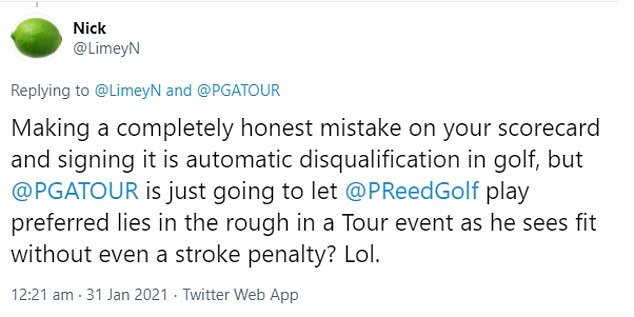 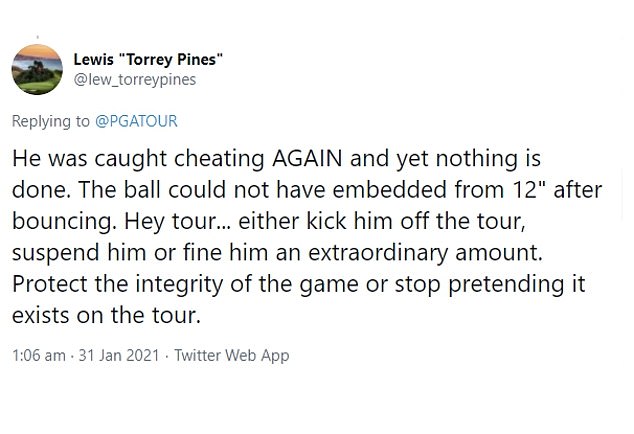