Augusta National will not ban LIV players from next year’s US Masters, with 16 of the rebels set to receive invitations in the coming days.

In a statement released by the Georgia club, chairman Fred Ridley reiterated his opposition to the Saudi-funded circuit and said the qualification rules could still change for the 2024 tournament.

“Regrettably, recent actions have divided men’s professional golf by diminishing the virtues of the game and the meaningful legacies of those who built it,” Ridley said. “Although we are disappointed in these developments, our focus is to honour the tradition of bringing together a pre-eminent field of golfers this coming April.

“Therefore, as invitations are sent this week, we will invite those eligible under our current criteria to compete in the 2023 Masters. As we have said in the past, we look at every aspect of the tournament each year, and any modifications or changes to invitation criteria for future tournaments will be announced in April.

“We have reached a seminal point in the history of our sport. At Augusta National, we have faith that golf, which has overcome many challenges through the years, will endure again.” 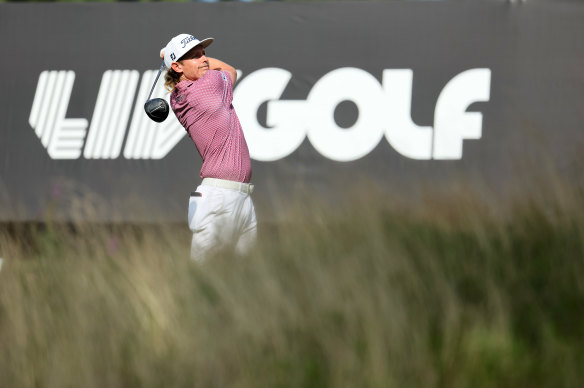 Cameron Smith during his first LIV Golf event in September.Credit:Getty

Ridley’s last point will be taken in some quarters as a plea for the civil war to end. A legal hearing in February will decide whether the DP World Tour can enforce punishments on LIV players, with the PGA Tour facing a similar court hearing that might not take place until early 2024. This has put the elite male game in limbo, and in this impasse it was almost certain that the majors would move to protect their quality of fields.

Martin Slumbers, the R&A chief executive, announced in July that omitting LIV players from next year’s British Open was “not on the agenda” and the US Open and US PGA are expected to follow suit.

However, the likes of Lee Westwood and Ian Poulter will not be eligible for Augusta unless they re-enter the world’s top 50 by the end of March. That is highly unlikely, as LIV has yet to gain world-ranking status.

At this year’s Masters, Ridley was reported to have tried to persuade some of the game’s biggest names to stop jumping ship. His statement leaves no doubt that Augusta National is unimpressed.

“From its inception in 1934, the purpose of the Masters has been to benefit the game of golf,” he said. “Each April, the Masters assembles the world’s leading golfers to compete for the Green Jacket and a place in history. It provides a stage for fans to experience dramatic moments of competition at the highest level and promotes the sport domestically and abroad.

“Legends of the game have competed and won at Augusta National Golf Club. They have inspired some to follow in their footsteps and so many others to play and enjoy the game. They have supported the sport and, thus, all who benefit from it. They have shown respect for those who came before them and blazed a trail for future generations. Golf is better because of them.”