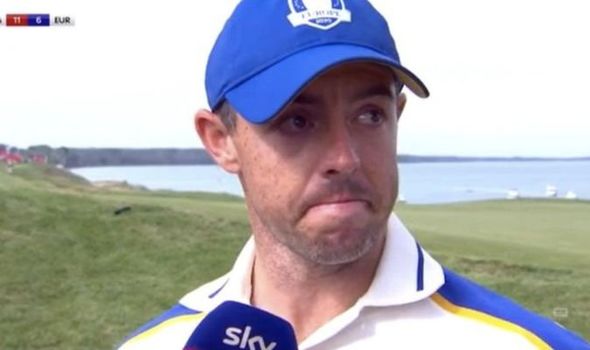 Rory McIlroy was driven to tears in an interview with Sky Sports after winning his Sunday singles match in the Ryder Cup, with Team Europe on the verge of a heavy defeat to Team USA at Whistling Straits.

The Northern Irishman could not hold back his tears while speaking to Sky Sports’ Henni Koyack after a difficult weekend personally in Wisconsin.

Four-time major winner McIlroy’s par at the par-five 16th hole was enough for him to oversee a 3&2 win over Xander Schauffele.

But though that cut the gap temporarily to 11-6, Team USA were in control across the board as they close in on a first Ryder Cup triumph since 2016.

An emotional McIlroy had to pause several times throughout his interview and said after finishing his round: “I love being part of this team.

“I love my team-mates so much and I should have done more for them this week. I am glad I got a point on the board for Europe today but I just can’t wait to get another shot at this.

“It is by far the best experience in golf and I hope the boys and girls watching this today aspire to play in this and the Solheim Cup because there is nothing better than being part of a team especially with the bond we have in Europe.

“No matter what happens after this I am proud of every single one of those players and our captain and vice-captains I just which I could have done a little more.

“I am glad I got a point on the board but it has been a tough week.”

McIlroy was far from his best across the weekend and on Saturday was left out of a Ryder Cup session for the first time in his career.

That was after the 32-year-old lost both of his matches on Friday’s opening day and sat out Saturday’s opening foursomes.

Before then he had played in 26 straight matches since making his debut in the competition in 2010.