Australia's Cameron Smith has pride of place on atop a crowded Masters leaderboard following a spectacular second round at Augusta National.

Smith, world No.1 Dustin Johnson, Justin Thomas and Abraham Ancer all have a share of the lead after finishing the second round at nine-under 135. 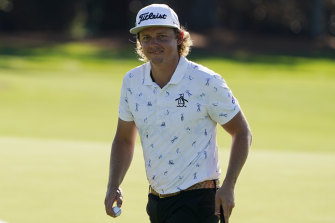 Cameron Smith was on fire at the end of his second round at Augusta National.Credit:AP

Patrick Cantlay is one shot off the lead after a 66 gave him a two-day total of 136. First-round leader Paul Casey is midway through his round at even-par and remains at seven-under.

Adam Scott, the Australian pace-setter on day one, carded a 72 to remain two-under while countryman and fellow major winner Jason Day is five holes into his second round and one-under the tournament.