Home » Golf » The Open For The Ages: Tiger Woods set for dramatic battle with Jack Nicklaus

Tiger Woods and Jack Nicklaus will go head to head… in The Open For The Ages. On the weekend when it should have been the 149th Open Championship at Royal St George’s the two golfing greats will deliver a fix for fans in a digitally enhanced composition.

The Open For The Ages will show real archived footage from previous Opens at St Andrews and give the dramatic feel of a final round over three hours on Sunday.

Woods and Nicklaus are the headline acts, but the footage will include the greatest champions of the last 50 years and the likes of Seve Ballesteros, Tom Watson, Sir Nick Faldo and Rory McIlroy.

Woods and McIlory have also been paired together for the first two rounds of the Memorial tournament on the PGA Tour which takes place this weekend.

But on Sunday morning the Open For The Ages will be shown live on Sky Sports.

Fans will also be able to play a role in who wins alongside a data model developed by NTTA DATA.

Nick Dougherty, Ewen Murray and Iona Stephen will be commentating. 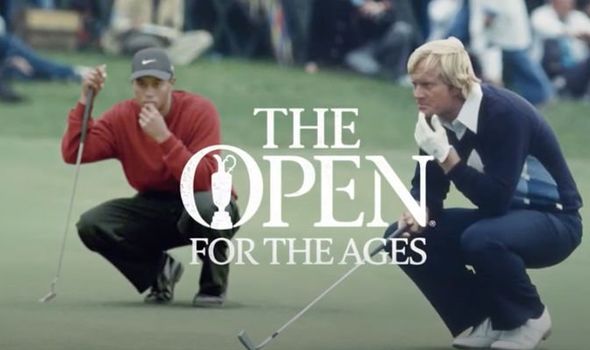 “To be involved with it, to be part of that commentary team, fills me with a lot of pride because it’s a really, really cool production,” Dougherty said.

“I think this is a thing that we’ve always dreamt of being able to do – to put the greats of the game over the course of history together against one another at the Old Course.

“It’s the stuff that dreams are made of. To see them there and watch them in their prime and look at the comparison between the golf swings and how they evolved, it was a lot of fun.”

And Murray added: “I was brought up in that part of the world, just a little to the south of St Andrews, so I knew St Andrews very well, I went to my first Open there as a nine-year-old in 1964.

“It’s an astonishing place. I think when you’ve played in The Open Championship at St Andrews, there’s something that gets under your skin and stays there, and thankfully it does.”

The Open For The Ages will be broadcast on TheOpen.com and The Open’s official YouTube and Facebook channels, as well as Sky Sports from 11am Sunday.

Related posts:
Basketball News:
Messi’s reason for refusing to look Henry in the face says a lot about him
Rafael Nadal and Dominic Thiem slammed for ‘silence’ on Australian Open Covid crisis
Mesut Ozil boards plane as Arsenal set to announce star’s transfer
MLB News:
‘St Kilda schoolgirl’ spills on AFL scandals, has been to ‘hell and back’
AFC unsung heroes: Naming one under-the-radar stud on each team
Eagles hire Colts offensive coordinator Nick Sirianni as head coach
Recent Posts
This website uses cookies to improve your user experience and to provide you with advertisements that are relevant to your interests. By continuing to browse the site you are agreeing to our use of cookies.Ok