Rory McIlroy has warned golf to prepare itself for life after Tiger Woods following his horror crash.

Woods, 45, successfully came through lengthy surgery to repair a shattered right leg and ankle at a California hospital yesterday but McIlroy believes the car accident that he was lucky to survive could well spell the end of the Tiger era.

“He’s not Superman,” said McIlroy. “He’s a human being at the end of the day. And he’s already been through so much.

“At this stage I think everyone should just be grateful that he’s here, that he’s alive, that his kids haven’t lost their dad. That’s the most important thing.

“Golf is so far from the equation right now, it’s not even on the map at this point. 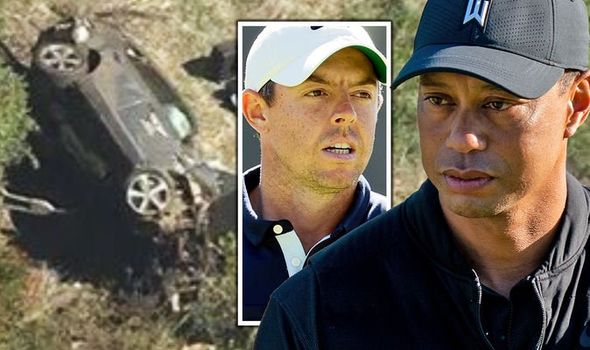 “He’s got some pretty bad injuries, but he’s going to be OK.

“Hopefully he comes back and is able to play but if he’s not, I think he’ll still be a part of the game in some way, whether that’s his design business and his foundation or hosting golf tournaments.

“It may be the end of seeing the genius at work with a club in his hand, but there’s still a lot of other ways that he can affect the game in a great way.”

Woods had a rod, screws and pins inserted to stabilise his right leg and ankle at Harbor-UCLA Medical Center after sustaining multiple fractures of the tibia and fibula as well as ankle and foot damage.

He is being monitored closely for infection as the bone was forced through the skin in the accident but is reported to be “awake, responsive and recovering.”

If Woods is able to engineer a successful return to the golf course it would make for a remarkable postscript to an incredible career but for McIlroy, even if he does not, he will lay claim to the greatest comeback in sporting history.

“I had lunch with Tiger in April 2017, just after he had the spinal fusion operation and he worked his way from hardly being able to walk or stand to being able to get his game back into shape to win the Masters two years later,” said McIlroy.

“I don’t think people to this day realise the struggle and the things he had to deal with to get to that point to win Augusta in 2019.

“I don’t want to take anything away from what Ben Hogan did after his car crash or any of the other comebacks that athletes have had in other sports, but right now I can’t think of any greater comeback in sports than the journey that he made from that lunch we had in 2017 to winning the Masters a couple of years later.”