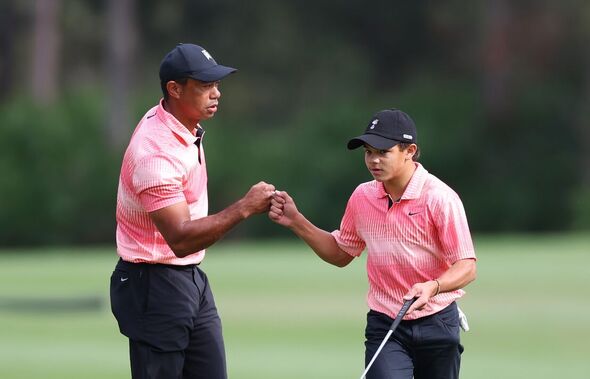 Tiger Woods candidly said “I can hit the golf ball” it was just the other parts he found “tougher” after a stunning round with son Charlie at the PNC Championship in Orlando. Team Woods fired a 13 under par 59 at The Ritz-Carlton Golf Course, with a final hole birdie leaving them joint second, two shots off Woods’ great friend Justin Thomas and his dad Mike.

The father and son duo played the first three holes in just one under par, but then came their electrifying charge which saw them pick up the nine shots and fly into contention. That included a chip-in for eagle from Woods Snr, met with the sort of crowd roar he became well accustomed to in his heyday.

Another birdie followed on 13 before two two showed off their survival skills, Tiger with a difficult chip out out of trouble to four foot, where Charlie did the rest. It was the youngster who also had to stay firm on 16 when left with another tricky short ranger to save par.

Tiger found water on 17 but again, the two were able to come away without any dropped shots. And then on 18, Tiger fired a long iron into the heart of the green and although both missed the chance at eagle, a birdie left their unblemished card on 13 under par, just two behind Team Thomas ahead of the second and final day.

“I can hit the golf ball. It’s just getting from point a to point b that’s tougher,” Woods told reporters afterwards. He also added “he couldn’t ask for more” having played three major championships and then alongside Charlie this year, initially fearing he would not play at all.

“Each and every day,” he replied, when asked how much Charlie and Sam (his daughter) had inspired him to come back from injury. “Just hearing their words of encouragement. I’ve had some tough days as they’ve known. But just to have their support and their encouragement, it has meant so much to me just to get to this point in life.”

For his part, 13-year-old Charlie described the round as “super fun”, saying: “It was just a great time and the atmosphere was amazing.”

Asked if his son had ‘amazed’ him, Tiger said: “Well this is what I see at home all the time so I’m used to it. But we got up some great heat goind in the middle part of the round. It was a great day and we’re in a great position going into tomorrow. “