It's an ongoing comparison between the Baseball Hall of Famer and three-time American League MVP as Trout's career has progressed. But when it comes to baseball cards, Mantle now holds the crown.

“I've dreamt of owning a 1952 Topps Mickey Mantle since I was a kid collecting cards,” said Rob Gough, the entrepreneur/actor who bought the card. “It's the Mona Lisa of sports cards and I’ve been searching for this high graded example talking to industry experts, dealers, auction houses, friends and I’m ecstatic that I’m now the proud owner of this iconic card.” 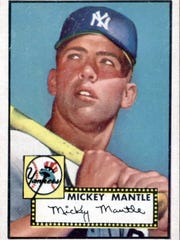 Mantle's 1952 Topps card was graded by Professional Sports Authenticator (PSA) as a 9 on a scale of 10 and is one of only six in existence. It's captured the attention of serious collectors in recent years and sold for $2.88 million in 2018, becoming the-then second-highest price ever paid for a card, falling short of the $3.12 million a collector paid for a 1909 T206 Honus Wagner card in October 2016.

The card is also one of the few that survived from being dumped into the Atlantic Ocean.

Mantle's card was included in the final Topps series of 1952, but Topps had a hard time generating interest in the cards and selling the packs. After sitting in a Brooklyn warehouse for several years, the remaining unsold packs were tossed into the Atlantic Ocean because they were taking up too much space.