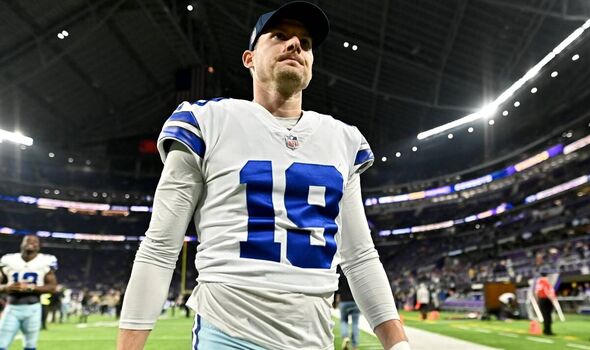 Dallas Cowboys kicker Brett Maher had a nightmare last weekend as he missed a record four extra points against the Tampa Bay Buccaneers. But his embarrassment has continued while warming up for their play-off clash against the San Francisco 49ers, and even owner Jerry Jones has ran out to speak with him.

A week on from the worst game of his career, it looks like Maher may not have fully recovered.

Maher became the first player to miss four PATs in a regular-season or postseason game since the statistic was first tracked back in 1932 last weekend, and his poor performance in front of the posts has continued. The Cowboys got away with it in their first play-off clash as they still beat the Buccaneers 31-14, but it won’t be so easy against the 49ers.

The 49ers have a brilliant kicker in Robbie Gould, and heading into last weekend Maher had only missed three all season. But he missed four last week, and has already missed a handful while warming up at Levi’s Stadium.

That’s according to The Athletic, as Bay Area reporter Tim Kawakami was watching on as the players began to warm up. Maher reportedly missed a 43-yard attempt that went about 20 feet wide right, straight after two earlier misses right from an even shorter distance.

Maher then made two as he found some confidence, but then missed another wide right. These misses were on the open side of the stadium, but he continued to miss half of his attempts on the closed side too.

Then incredibly, the Cowboys owner walked onto the field to speak with the kicker and try to calm him down. There has been a lot of speculation about the future of Maher, but the Cowboys were keen to stick with him.

And quarterback Dak Prescott tried to remove some of the heat off his back last week, jumping to his defence. “Yeah I mean, I’m money Maher’s biggest fan,” Prescott said after the win against the Buccaneers.

“I talked to him individually after the game and just told him to let that go, we’re gonna need it. I just played like s*** a week ago so that happens.

“Knowing what that guy’s done, with his resiliency he’s shown throughout his career, personally there’s not doubt he will come back next week and be perfect.” Jones needs him to be perfect, and he even called the 49ers a ‘daunting task’ ahead of this week.