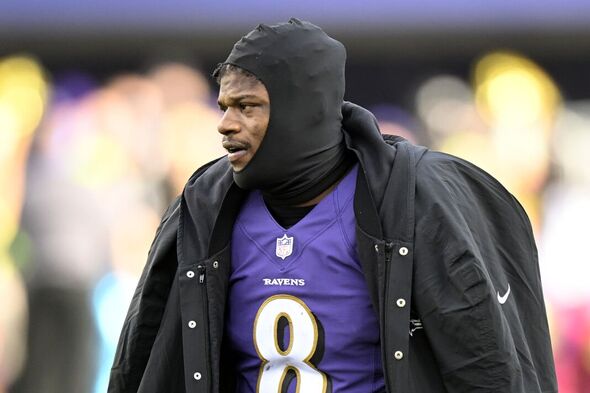 The Baltimore Ravens insist they are all in on re-signing their franchise quarterback Lamar Jackson, with the 26-year-old set to become a free agent in just a matter of weeks. Jackson was unhappy with the Ravens after failing to agree a long-term deal, with the star reportedly wanting a similar contract to the one given to Deshaun Watson by the Cleveland Browns.

With a deal not agreed, the Ravens franchise-tagged Jackson which would see him remain with the team for at least one more year, something the quarterback expressed his displeasure at.

Technically, the Ravens could sign Jackson to the franchise tag once again this summer, and it might be cost effective for them to do so, rather than give him a long-term deal.

However, head coach John Harbaugh insists they plan to reward him with a long-term deal. Asked whether Jackson will remain a Raven, he said: “One hundred percent, 200 percent. There’s no question about it. Lamar Jackson is our quarterback. Everything that we’ve done in terms of building our offence and building our team, how we think in terms of putting people around him, is based on this incredible young man, his talent, his ability and his competitiveness.

“I love Lamar, (general manager) Eric (DeCosta) loves Lamar, and it’s not gonna change in the future. I don’t know anything about the details or the whole thing, but I know one thing: I’m like all the fans out there and everybody else.

“I’ll have my fingers crossed, my toes crossed and I’ll be saying prayers. I have faith it’s gonna get done, and we’ve got the best people in the world doing it. Eric wants him here, I want him here, Steve wants him here, and Lamar wants to be here. it’s gonna work out.”

Jackson was unable to play in the final weeks of the season before missing their play-off outing with rivals Cincinnati Bengals, due to a PCL injury. Jackson was seemingly unhappy with the team, who expressed that he should be back playing before the close of the season.

But the quarterback insisted that he was still dealing with pain, and that his knee did not feel good enough for him to play on – potentially risking further injury and costing him millions ahead of his free agency.

Back-up Tyler Huntley has shown that he’s capable of running the offence should Jackson not be available, but did struggle in the playoffs.