PHOENIX — Major League Baseball, fearing that the pandemic could create havoc with their scheduling once again, is proposing the return of seven-inning doubleheaders and extra-inning games beginning with a runner on second base, two persons with knowledge of their discussions told USA TODAY Sports.

The persons were unauthorized to publicly discuss MLB’s plan because of the on-going negotiations with the Major League Baseball Players Association, which must approve the rule changes.

Yet, the rules that were implemented for the first time in 2020 during the 60-game shortened season, designed primarily to limit the length of games during the pandemic, were widely embraced by the players, with MLB managers advocating for the rules to return.

“Change is abundant now,’’ Oakland A’s manager Bob Melvin said last month, “in every walk of life. And if you don’t embrace it, you get stuck in the mud.’’

While the union is expected to approve the rule changes for the 2021 season, the two sides still have not determined whether there will be a universal DH or an expanded postseason with the rosters remaining at 26 players. 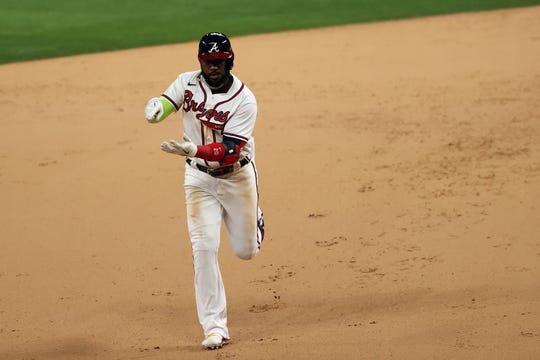 MLB has proposed implementing a universal DH in exchange for an expanded postseason — which would generate additional revenue with the extra round of playoffs televised by ESPN — but the two sides have been at a stalemate.

Most baseball executives still believe there will be a universal DH this season, but unless the union approves an expanded playoff field, it may not happen. MLB is seeking a 14-team playoff field — two fewer teams than a year ago but four more than their format since 2012.

Players and agents surveyed in the past week have made it abundantly clear they want a universal DH. They believe they’ll have the DH in both leagues, anyways, with a new collective bargaining agreement starting in 2022, so why not have it now, particularly since pitchers haven’t lifted a bat in a year?

“I always think the DH creates more opportunity for guys to get jobs,’’ outfielder Kevin Pillar said. “I think the DH makes the game a little more exciting. I know there are traditionalists who like the strategy, taking out a pitcher in a double-switch, and when to take your pitcher out.

“But it sure feels like pitching is so dominant now that if you can add an extra guy to the lineup, why not?’’

The truth is that most general managers and executives feel the same way, and even in NL traditional cities like St. Louis and Cincinnati, the DH met little opposition.

“Both from a Mets standpoint and from a general baseball standpoint,’’ Mets president Sandy Alderson recently said in a conference call, “having a DH in the National League is a good thing. The fact is, pitchers can’t even bunt anymore. So I’m in favor of putting a hitter in that additional slot. ultimately it makes the game more exciting. More offense, or more opportunity for offense, a bigger challenge for the pitchers.

“I just think for the overall quality of the game, the excitement level of the DH is the right thing in the National League.”

Teams also are heavily in favor of expanded playoffs, with a record 16 teams reaching the playoffs last year instead of 10, eliminating the one-game, winner-take-all game with a best-of-three first round.

Most agents and players also embraced the concept, although the sentiment is hardly unanimous.

“I think the baseball playoffs last year were extremely exciting,’’ Pillar said. “It was fun seeing baseball on from 9 a.m. to night time. It was really exciting. I think it made some of the (division) races exciting, even in a short season.

"I think if you allow more teams a chance to get into the playoffs, you’re going to find more teams being competitive, and hopefully going out and acquiring players and spending more money on players. There are certain teams right now with the regular format knowing they’re not top four- or five-team in their league, and feel they’re too far away to try.

“But the more teams that you give an opportunity to make the playoffs, it gives teams more incentive to go out and try to win. That’s what this league needs: to have more teams trying to be competitive and trying to win.’’

Yet, if there are too many teams entering the playoffs, Dodgers starter David Price says, it could reduce team spending. Why spend an extra $20 million on a free agent if you’re going to make the playoffs, anyway?

“I don’t really like it,’’ Price said. “I don’t think it expands spending at all. I think it goes the opposite way.’’

Dodgers teammate Cody Bellinger says he thoroughly enjoyed the expanded postseason last year, but, of course, was biased by the final outcome.

“I think it helps everyone, but I mean, we won it all,’’ Bellinger said, “so that made it pretty enjoyable.’’

MLB is seeking a 14-team playoff pool that provides the team with the best record in each league a first-round bye. Last year, with 16 teams, the only advantage to winning the division was playing the best-of-three at home. The team with the league’s best record simply played the lowest seed.

Veteran agent Scott Boras says he is in favor of expanding the postseason, even keeping it at 16 teams for fear that if a team is rewarded with a first-round bye, the layoff may prove to be detriment.

MLB: Teams should plan for spring training to start on time

2021 SEASON: Will MLB have fans in the stands? New guidelines offer hope.

“I think it’s good for baseball because it creates competitiveness,’’ Boras said. “The fans know that if there’s eight playoff spots in each league, you’re going to have 11 or 12 teams competing for those spots. You know in some form you’re going to be in it. So the more things we can do to create competition, I think that helps.

“I just don’t any teams to have a bye and be off for five days. Teams go stale. Hitters’ timing is thrown off. It upsets the rotation.’’

Boras even suggested that perhaps the team with the best record should have to win just one game in a best-of-three series with the opposition needing two, a greater reward rather than simply playing the lowest-seeded team.

Who knows, maybe they’ll even adapt the idea floated a year ago of the highest-ranked teams being able to select their first-round playoff opponent on the final night of the regular season?

“I feel like I speak for everybody when I say we just want to get back to playing baseball,’’ Washington Nationals reliever Daniel Hudson said, “and we’ll figure out the small details as we go.

“If there’s a good proposal on the table for both sides, I’m sure we can get things figured out.’’