Free agency is always a fun stop on the NFL roadmap. Salary cap gymnastics, the beginning and end of chapters in some cases, pursuits of the ‘missing piece’ and those moves that leave you asking ‘why?’.

At 4pm Eastern Time on Wednesday, March 17 the 2021 league year will begin and free agents will officially be open for business as they begin their search for a new home.

Teams were recently informed by the NFL that this year’s salary cap will be no lower than $180m, marking a minor increase on the previous cap of $175m. The final number is expected to be somewhere between $180m and $185m – down from last season’s $198.2m figure – with teams permitted to carry over cap room from previous years. 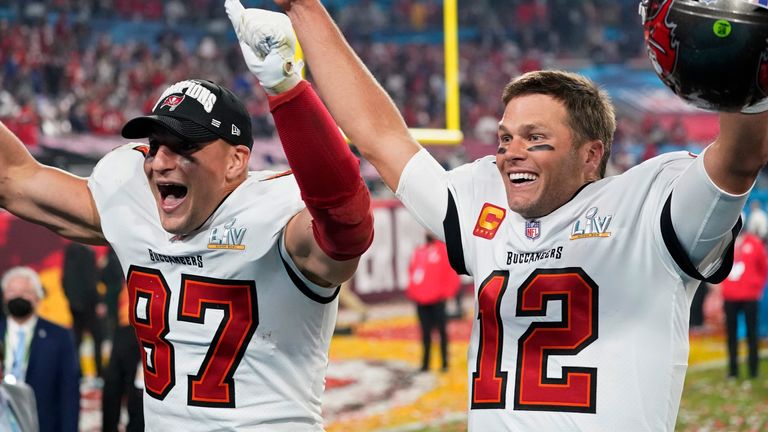 2020 set the bar rather high. Tom Brady landed with the Tampa Bay Buccaneers after 20 years with the New England Patriots, Philip Rivers headed to the Indianapolis Colts to make one final run at it, the Los Angeles Rams released now-Atlanta Falcons running back Todd Gurley, the Carolina Panthers parted with Cam Newton and turned to Teddy Bridgewater, and Yannick Ngakoue clashed with the Jacksonville Jaguars brass before finally being granted his exit late in the summer.

Sometimes it can be the less-discussed transactions that hit the hardest. Leonard Floyd left a stuttering career with the Chicago Bears before starring for the Rams’ No 1 ranked defense, offensive tackle Jack Conklin proved an integral addition to Baker Mayfield’s protection with the Cleveland Browns, and cornerback James Bradberry enjoyed a phenomenal individual campaign with the New York Giants.

Decisions for the champs

The Bucs have some finances to juggle if they intend on retaining the group that delivered hometown Super Bowl glory, with Tampa currently projected to have $28.2m in available salary cap space and a host of pending free agents to contend with.

While edge rusher Shaquil Barrett looks a candidate to play under the franchise tag for a second straight year, the NFL’s 2019 sack leader has made clear of his desire to agree a new long-term deal this offseason. Wide receiver Chris Godwin is another potential and seemingly more likely tag option as he prepares to hit free agency after recording 65 catches for 840 yards and seven touchdowns in 2020. His projected $16.4m franchise tag figure would represent a less costly route for the Bucs before potentially signing him to a multi-year deal in 2022. Veteran linebacker Lavonte David is also up in having been a staple of the Bucs defense since being drafted in the second round in 2012. He posted 143 tackles, 2.5 sacks and 10 pass deflections across 20 regular season and playoff games this past campaign and is at the end of a five-year deal that saw him earn around $10m annually. The Bucs will be reluctant to split the 31-year-old from Devin White after seeing the pair emerge as one of the most dynamic linebacker duos in the league over the past two years.

After playing on an $8m deal last season, there’s a good chance veteran defensive tackle Ndamukong Suh would be open to another team-friendly deal in order to return in 2021, especially at the age of 34. The same might be said for tight end Rob Gronkowski, who one would imagine only wants to play with that man Brady.

Running back Leonard Fournette is another of the 24 Bucs players who could become unrestricted free agents after breathing new life into his career with Tampa following his exit in Jacksonville, while wide receiver Antonio Brown and kicker Ryan Succop are also seeking new deals.

Grab yourself a receiver The year of the receiver! Those in need of new playmakers on the outside are in for a treat as they stare at a loaded pool of free agency wideouts and a Draft class spearheaded by Ja’Marr Chase, DeVonta Smith and Jaylen Waddle, to name just three of many outstanding pass-catchers coming out of college.

Like Godwin, Allen Robinson is a tag option for the Bears if they wish to lock down their top offensive weapon, although it’s fair to say the 27-year-old has shown little interest in that particular scenario. He is coming off his second straight season of at least 1,100 receiving yards having enjoyed his best campaign since with the Jags in 2015 (80 catches, 1,400 yards, 14 touchdowns) with a career-best 102 catches for 1,250 yards and six scores. Here’s a man deserving of an opportunity on a good team with a good quarterback.

The Detroit Lions, too, could tag star receiver Kenny Golladay in a bid to help new quarterback Jared Goff succeed. Golladay was limited to just five games last season due to injury after recording 65 catches for 1,190 yards and a league-high 11 touchdowns in 2019.

Curtis Samuel of the Panthers and the Titans’ Corey Davis, who will be hoping he has earned himself a new deal in Tennessee, enter free agency on the back of career years, while JuJu Smith-Schuster’s future with the Pittsburgh Steelers remains uncertain.

A Houston Texans team in turmoil will be desperate to keep hold of Will Fuller, Detroit’s Marvin Jones wants to join a Super Bowl contender, the Bengals’ AJ Green looks set to be on his way out of Cincinnati, T.Y. Hilton looms as an intriguing veteran option and Sammy Watkins may be tempted into another team-friendly team with the Kansas City Chiefs.

There is not a team in the NFL that would not benefit from signing JJ Watt, who headlines the defensive options this offseason after his mutually-agreed release from the Texans.

Watt recently suggested he is taking his time mulling over the options at his doorstep, and understandably so. The prospect of him joining a ready-made playoff defense that relaxes the level of responsibility he shouldered in Houston should be an exciting one when it comes to hopes of seeing the best of him once again. 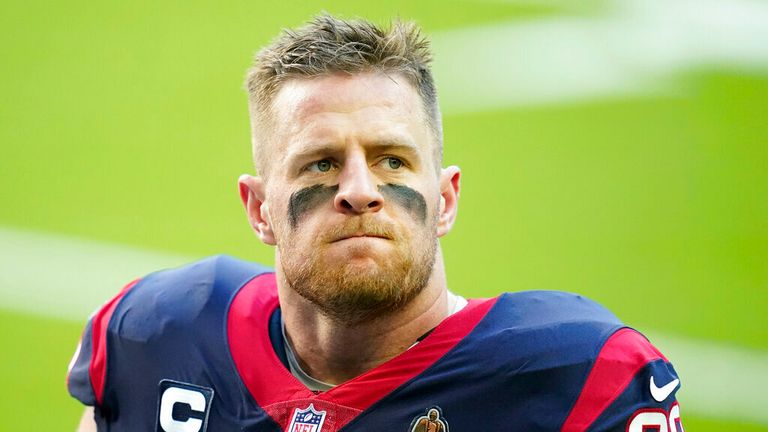 The Arizona Cardinals want cornerback Patrick Peterson back in 2021. Whether that happens remains to be seen, with the 30-year-old insisting the week after the Super Bowl a decision was still yet to be made.

With both Ngakoue and Matthew Judon due to become free agents, the Baltimore Ravens being able to re-sign both feels like a tough ask, while the Steelers’ cap deficiencies (-$7.5m in cap space) leaves questions over the future of pass rusher Bud Dupree, who was exceptional prior to suffering a torn ACL last season.

Jadeveon Clowney is unlikely to warrant eye-watering amounts of money after struggling to live up to expectations in Tennessee, Melvin Ingram could be available after a disappointing injury-hit campaign with the Los Angeles Chargers and Cardinals edge rusher Haasan Reddick and Bills linebacker Matt Milano are further franchise tag contenders.

The biggest Free Agent signing will be _____ pic.twitter.com/IRprh9GWvj

Sitting with roughly -$36m in available cap space, the Rams face a challenge if they wish to reward Floyd with the money he perhaps deserves, and the Minnesota Vikings must decide whether or not to bring back versatile safety Anthony Harris, who played on the franchise tag last year.

The best of the rest

There is a reluctance to include Dak Prescott in this, with logic suggesting the Dallas Cowboys will either apply the franchise tag to their quarterback for a second straight year following October’s season-ending injury or finally sign him to the long-term deal he deserves. Either way, Jerry Jones should not be letting him leave the building.

Having missed the entire 2019 season, Trent Williams signed with the San Francisco 49ers in 2020 and quickly reminded all that he remains one of the NFL’s premier offensive tackles. Should the Niners fail to agree a new deal with him, Williams will be greeted by his fair share of suitors. 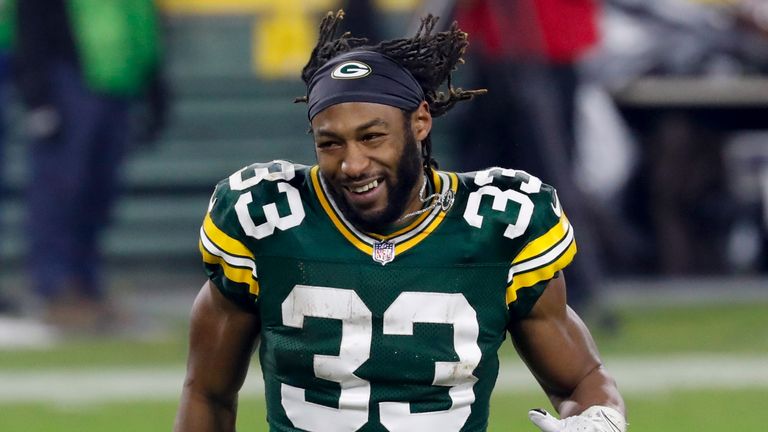 Running back is another hot topic heading into free agency, starting in Green Bay as the Packers consider their next steps with both Aaron Jones and Jamaal Williams, both of whom are due to become available having been instrumental to Matt LaFleur’s offense out of the backfield and as pass-catchers. Given the organisation’s high hopes for 2020 second-round pick AJ Dillon, don’t be surprised to see at least one of the two depart.

Elsewhere in Seattle, is it time for the Seahawks to pay running back Chris Carson? The 2017 seventh-round pick represents the organisation’s most successful attempt to try and replace the production of Marshawn Lynch, but the level of punishment his hard-hitting style has endured over the years naturally raises concerns. It’s the age-old debate, do you pay the running back? Injury hindered him last year after back-to-back 1,000 yard rushing seasons in 2018 and 2019, but you would feel there is certainly plenty in the tank.

Arizona’s Kenyan Drake is another possible mover amid the ascent of Chase Edmonds out of the backfield, as is Miami’s Matt Breida in light of the Dolphins’ potential to seek out a running back in the Draft.

On the tight end front, the Chargers’ Hunter Henry leads the way alongside Gronk after playing on the franchise tag last season, while Jonnu Smith is in line to hit the open market after producing a career-high seven touchdown catches for the Titans in 2020.

For updates on the tags, free agency and the Draft, be sure to follow along at skysports.com/nfl and on Twitter @SkySportsNFL.