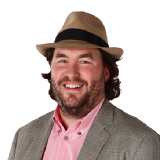 ARCHIE AND OLIVIA Manning are sitting in gray rocking chairs on their front porch in Oxford. They are a few hundred yards from the Ole Miss campus, where the speed limit is the same as Archie’s old jersey number: 18 mph, please. The Mississippi heat is merciful this early in the morning. He’s got a hearing aid. When he walks, his knees sound like someone learning to drive a stick shift. If his house caught on fire, he jokes, the first thing he’d grab would be his cane. She is elegant and funny. They’ve been married for 49 years and smile at each other a lot. Everyone who walks past their condo waves and feels like they’ve been given an audience when the Mannings wave back.

It’s been a busy summer. They tell me they’re currently in the process of putting their big house in New Orleans on the market. That’s where they raised their three sons, and now they’re downsizing to a condo a few blocks away. Archie is 71, and Olivia’s 71st birthday is in a few months. Their children are grown and gone, and that home is cavernous without the noise and dirty laundry and nonstop football games and driveway basketball shootouts. They bought the house when their lives were expanding. That was a long time ago. They said their middle son, Peyton, is particularly upset about the loss of his boyhood home and all the memories they made there, he being the most sentimental of the three. His parents politely told him that yes, they were aware of his immense wealth, and that no, he couldn’t buy it, because what would he do with it, and because life is a circle and they are now in the age of shedding things.

This fall is the 50th anniversary of Archie’s senior year at Ole Miss — which I know because I am a sentient organism in the state of Mississippi — and of Olivia’s senior year too. This is the third time they’ve been to Oxford during quarantine, helping with Eli and Abby and their kids, who rode out a chunk of the virus time here. In all, Archie and Olivia have nine grandkids, who know him as Red and her as Go-Go. Everyone loves when Red and Go-Go are around. All the Manning grandchildren have had their own moment of realization when they reconcile the sweet doting man they know as Red with the cultural institution named Archie Manning. It’s hilarious when they put it together. A few years ago, Eli’s oldest child, Ava, was watching “The Book of Manning,” and after a while, Eli explained that the young man throwing bullets and scrambling to keep plays alive was her grandfather.

She took this new information in for a minute, watching Archie in the fall of 1969 and 1970. It’s been 50 years since he played college ball, and even across those decades and generations a 7-year-old could recognize something special.