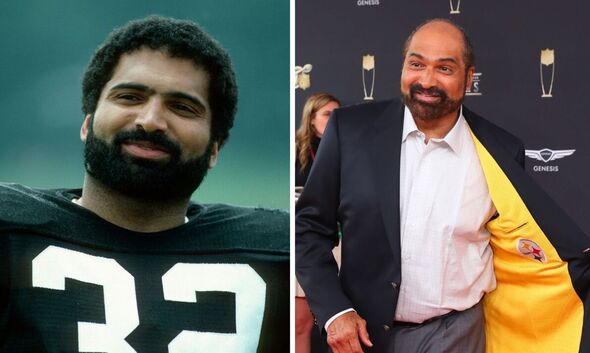 NFL Hall of Famer Franco Harris, known for his role in creating one of the most famous plays in history labelled the ‘Immaculate Reception’, has died aged 72. Harris spent 12 seasons with the Pittsburgh Steelers, winning the Super Bowl on four occasions, before he retired as a member of the Seattle Seahawks in 1984. The news was confirmed by his son, Don Harris, who said the NFL legend died overnight. No cause of death was given.

The tragic news comes just two days before the 50th anniversary of the ‘Immaculate Reception’, which helped catapult the Steelers dynasty that tormented the league in the 1970s. Pittsburgh were set to honour Harris by retiring his no.32 jersey at half time of their match against the Las Vegas Raiders on Saturday night.

Across his iconic career, Harris rushed for 12,120 yards and collected four rings with the Steelers. However, he is largely credited with igniting their run of success thanks to his play on a last-gasp pass by quarterback Terry Bradshaw in a playoff win over the then-Oakland Raiders back in 1972.

The Steelers were trailing 7-6 on fourth down and 10 on their own 40-yard line when 22 seconds were left on the clock in the match. Bradshaw threw a deep ball intended for running back French Fuqua, who leapt to collect the pass when Oakland defensive back Jack Tatum contested it, and the ball was knocked in the direction of Harris.

While almost every other play stopped, Harris sensationally snatched the ball just inches from the turf near the Raiders’ 45-yard line and sprinted to the end zone to give the Steelers their first postseason win in franchise history. The team lost to the Miami Dolphins in the AFC Championship, but the play signalled Pittsburgh’s arrival; they were on their way to winning Super Bowls after the 1974, 1975, 1978 and 1979 seasons.

After the play was voted the greatest play in NFL history in 2020, Harris declared: “That play really represents our teams of the ‘70s.”

Harris, who won Rookie of the Year in 1972 after rushing for 1,055 yards and 10 touchdowns, rushed for a then-record 158 yards in Super Bowl IX, leading the Steelers to a 16-6 win over the Minnesota Vikings. Harris was named the game’s MVP as a result. His 354 yards rushing across four Super Bowl appearances remains an NFL record.

The Steelers of the 1970s featured stars like Bradshaw and Joe Greene, but Harris was a revelation on offence. He surpassed 1,000 yards rushing in a season eight times, including five in a shorter 14-game schedule. Harris added another 1,556 yards rushing and 16 rushing touchdowns in the playoffs, which rank him second all-time in both.

After he was surprisingly cut by the Steelers, Harris signed with Seattle, running for just 170 yards in eight games before he was released. He retired as the NFL’s third all-time leading rusher, behind Walter Payton and Jim Brown.

Tributes poured in for Harris from around the NFL world, with the Pro Football Hall of Fame writing: “Franco Harris will not only be remembered as a great player. His legacy will also be one of character and humility off of the field, as well as a dear friend of the Hall.

“We are honoured to have the opportunity to help tell his story and keep his legacy alive forever.”

The Steelers issued a statement on behalf of franchise president Art Rooney II in the wake of Harris’ death, which read: “It is difficult to find the appropriate words to describe Franco Harris’ impact on the Pittsburgh Steelers, his teammates, the City of Pittsburgh and Steeler Nation. From his rookie season, which included the Immaculate Reception, through the next 50 years, Franco brought joy to people on and off the field.

“He never stopped giving back in so many words. He touched so many, and he was loved by so many. Our thoughts and prayers are with his wife Dana, his son Dok, and his extended family at this difficult time.”

Two-time Super Bowl champion and NFL legend Ottis Anderson also paid tribute to Harris and shared the extent of his relationship with the legend. He took to Twitter to write: “Rest in sweet peace Franco Harris.

“Franco was a friend and a mentor to me. He gave me advice when I was a rookie and I never forgot that. Heaven got a good one.”