Home » Racing » Drive to arrive: How long until we see women in Formula One?

Miami: It may not have looked like it from the coverage, but Sunday’s inaugural Miami Grand Prix was not merely a photo opp for every Florida-based golfer, reality TV star, or associated hanger-on on the planet. It was also the latest staging post for one of motorsport’s longest-running struggles; the battle to get a female driver into Formula One.

The opening round of W Series – the all-women formula which is now into its third season – was the main support act to the Miami race. And its return reignited the debate over the series’ quality and purpose.

The fact that Jamie Chadwick, the young Briton who won the first two seasons of W Series, was back in the car, and won both races, of what was a double-header opening weekend, was both a blessing and a curse. Chadwick, 23, is by far the series’ most marketable driver. Its biggest name. But by her own admission, she wanted to have moved on by now. To a seat in F3 or F2. To take on the best in the junior ranks. The fact that she could not find one raises uncomfortable questions.

Is W Series the right way to promote women’s talent? Is the standard sufficiently high that teams in F3 and F2 will take on its best drivers? And what more could or should F1 be doing to accelerate the pathway for that talent?

Since it first launched in 2019, W Series has had its detractors, female drivers among them. Sophia Floersch, perhaps best known for her spectacular crash in Macau in F3 a few years back, has long argued it is the wrong way to go. Pippa Mann, who has entered the Indy 500 seven times during her career, called W Series a “historic step backwards” when it launched.

But it is probably fair to say its supporters outnumber its detractors. 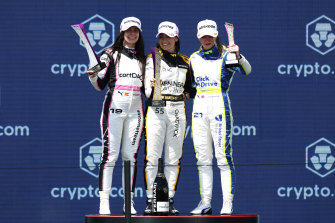 Marta Garcia, Jamie Chadwick and Jessica Hawkins on the podium in Miami.Credit:Getty

You cannot be what you cannot see, as the saying goes. And W Series, if nothing else, is doing an excellent job of marketing itself, giving more women a platform and an opportunity to showcase their skills, live on television.

Is the level high enough? Clearly not yet. Series founder and chief executive Catherine Bond Muir stresses it is a long-term project, making the point that it will take time for the small girls being inspired now to filter through. But it does not help W Series’ reputation when its brightest star cannot find a route out.

This is where the third question becomes more pertinent. Could Formula One’s teams be doing more to help? Should that even be their role?

The truth is, F1 teams exist to win. They select their drivers based on talent or backing, or a combination of both depending on the team’s funding status. When a female driver comes along who scores highly enough in one or both of these categories, teams will no doubt scramble to secure her services. Because the PR upside to being the first team to run a female driver in a F1 race since Lella Lombardi back in 1976 will be immense. Until then, they will most likely get on with the job in hand.

Teams like Aston Martin, with Jess Hawkins, and Williams, with Chadwick, do give women opportunities as ‘driver ambassadors’ or ‘development drivers’. But there is a limited amount they can do without the necessary FIA super licence points to drive a F1 car.

Chadwick has 25 points at the moment, 15 short of the required amount. But as a two-time winner of W Series, she is forbidden from winning any more in that category (another issue with her return this year).

So what is the solution? One team principal spoken to in Miami said he felt the money being spent on W Series could be “more efficiently used” focusing on the “top three or four” drivers in the series, running them in F3 or F2, series which cost £1 million ($1.77m)-plus to compete in per year. This suggestion drew a scathing response from Bond Muir, who pointed out that W Series was not set up that way.

“We have raised £30m in equity to fund W Series,” she said. “And our investors are funding a business that is going to grow. The pot of money he is talking about is very different to my pot of money.” 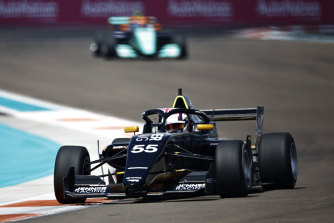 Jamie Chadwick has taken all before her in W Series and can no longer earn licence points from that category.Credit:Getty

What about F1 teams then? Red Bull? They would seem exactly the sort of company who do have the necessary ‘pot of money’. They already run a young driver program, promoting the brightest young talent. What if they spent some of their millions identifying and bringing on the four of five most exciting female prospects in the world in an effort to get one to F1? It would surely fit perfectly with their brand?

Christian Horner, team principal of Red Bull Racing, baulked when this was put to him on Saturday.

Horner argued it was really a question of time. W Series is, in his view, “a great initiative” and one which is “going to attract more and more girls into motor sport”. But it takes time for that talent to filter through.

Whether Chadwick, still only 23, will ever get her chance remains to be seen. Perhaps highly-rated 19-year-old Abbi Pulling, who finished sixth in Sunday’s second W Series race, will be the one to break through? Most likely, it will be someone we have not yet heard of. A 10 year-old who is beating every boy in junior karting. “Of course, there’s always going to be that debate,” Horner concluded. “You know, should the girls race with the boys? Should it be like other sports where you have to separate competitions? I think there shouldn’t, and there aren’t, barriers. If the talent is strong enough, it will permeate its way into Formula One. Because, you know, we’re all as teams very selfish. We all want the best drivers, regardless of background or gender.”