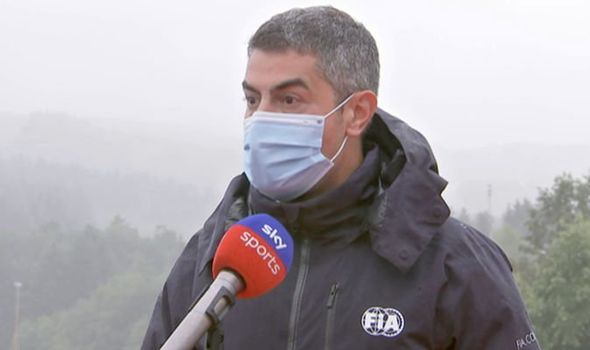 FIA race director Michael Masi has responded to calls for the aborted Belgian Grand Prix to have been postponed until Monday. Heavy rain meant there was no competitive racing on Sunday’s race with the conditions too dangerous.

The result was classified despite just two laps behind the safety car at Spa-Francorchamps following a near three-hour break after the formation lap.

The race was red-flagged after that and again later on after just two completed laps behind the safety car, with Red Bull’s Max Verstappen declared the race winner and awarded half points.

George Russell was awarded his first Formula One podium by coming second for Williams while Lewis Hamilton of Mercedes came third.

Hamilton was among those unhappy post-race, insisting to Sky Sports F1: “Money talks. And literally the two laps to start the race was all a money scenario. Everyone gets their money – and I think the fans should get theirs back too.

“I think the sport made a bad choice today. Of course we wanted to race but this minimum of two laps you need to do to count as a race, between the gap [between the race stopping and resuming] it rained consistently.

“There was only one reason why they sent us out. That’s why I feel more bad for the fans.”

Yet Masi insisted it was never a possibility that the race could be pushed back another 24 hours to enable more action out on track.

“Conditions have not been great all weekend but we had patches where we could get activity done. Today the weather got a bit of the better of us.

“It was to see what the conditions were like. We were in constant contact with our official weather provider and there was a window where it looked like it was provided there.

“We had the requirement for a 10-minute warning so it was like, ‘Let’s see if we can find that 10-minute window.’

“A number of the teams saw that window and exactly what we were trying to do to find it. The weather came in and got the better of us again.

“There’s no ability to postpone the race until tomorrow. Obviously from an FIA perspective and jointly with F1, safety is paramount for the drivers, the teams and all of the spectators.

“We gave every available opportunity within the regulations and within the provisions of the International Sporting Code to get the best opportunity to be able to complete a race, but unfortunately on this occasion we could not go the full distance that was available.

“With the provisions of the ISC to stop the clock, that’s what we tried to do to try and get ourselves in that weather window and get some activity.

“There’s a whole range, a big list pages long that would run between organisers, you know, everyone here… there’s no ability to postpone to the following day. I don’t know logistically if it’s a possibility that it could have been [run later in the year].”

F1 Media later tweeted: “Following the significant weather disruption to the 2021 FIA Formula One Belgian Grand Prix, the FIA and Formula One are disappointed for all the fans at the track and at home that today’s race could not go to full but the safety of the drivers, marshals and spectators must always be the priority.

“The Decision of the Stewards to extend the window in which the race could take place gave every possible opportunity to maximise the day’s running, but the weather conditions unfortunately did not improve sufficiently to complete more laps.”