Home » Racing » ‘Let them settle it on the track’: Final race will define legacies of Hamilton, Verstappen

For only the second time in Formula One history, the leading two drivers in the world championship arrive at the final race of the season level on points, setting up a winner-takes-all dash for the title.

But at Sunday’s season-ending Abu Dhabi Grand Prix, where Mercedes’ Lewis Hamilton and Red Bull’s Max Verstappen will compete in a one-race showdown for the biggest prize in world motor sport, there’s more at stake than lifting the championship trophy after a fiercely fought season that brings their burgeoning rivalry into the conversation with some of the sport’s most famous.

It’s a race that could define legacies, and prove to be one that represents a seismic moment in Formula One’s fight for supremacy.

Hamilton stands on the cusp of winning the championship for the fifth year in succession and for a record eighth time, which would take him past Michael Schumacher’s seven world titles. Already the holder of the most wins (103), pole positions (103) and podium finishes (181) in the history of the sport, title number eight is the 36-year-old Briton’s final frontier.

Verstappen, 24, has been on a seemingly inexorable path to the world championship since he became the youngest driver to win a race at the age of 18 when he was victorious on debut for Red Bull in Spain in 2016. No other Dutch driver has won a grand prix, while Verstappen’s 19 career victories are the most by a driver without a world title to their name.

It’s a generational battle that has become increasingly bitter as the 2021 season has evolved, with the pair involved in several on-track crashes and off-track spats that rekindle memories of the sport’s most famous one-on-one battles between the likes of Ayrton Senna and Alain Prost, and Schumacher’s stoushes with Damon Hill and Jacques Villeneuve.

Both drivers arrive at the final race of the season at the Yas Marina Circuit with 369.5 world championship points, with – crucially – Verstappen the series leader by virtue of having won nine grands prix this season to Hamilton’s eight. Should neither driver score points nor finish the race in Abu Dhabi, Verstappen will be crowned champion.

The equation is simple; how we arrived at it is altogether more complicated.

A season of acrimony

Since Hamilton won the season-opening Bahrain Grand Prix after a late-race battle with Verstappen, incidents and accidents between the pair have become common – and with increased intensity. Hamilton backed out of first-corner fights with Verstappen at the Emilia-Romagna Grand Prix and again in Spain, but stood his ground at his home grand prix at Silverstone, the pair touching at the 300 km/h Copse Corner on the opening lap and Verstappen’s car ending up in the trackside barriers – and the Dutchman in hospital for precautionary checks.

With the tension escalating, the pair locked horns at the Italian Grand Prix, both drivers eliminated from the race in a crash in which Verstappen’s car came to rest perilously close to Hamilton’s head, and the duelling duo were at it again at the US Grand Prix in Austin and the Brazilian race at Interlagos, where Verstappen wasn’t penalised for running Hamilton off the circuit in a race the Mercedes driver eventually won. 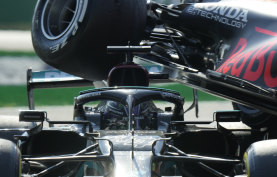 The most bitter flashpoint came last weekend at the Saudi Arabian Grand Prix, where Verstappen was penalised twice for incidents with Hamilton. The Dutchman was issued with a 10-second time penalty for what race stewards deemed “erratic driving” by slowing in front of Hamilton, who ran into the back of him.

Australian driver Daniel Ricciardo, teammate to Verstappen at Red Bull from 2016-18, doesn’t envisage the Dutchman eschewing his trademark aggression in the season decider.

“Max has always raced in a similar way, he’s always been the guy who’s aggressive and pushing the limits,” Ricciardo says.

“It’s the way he goes about it and it’s obviously got him to this point, so I don’t think he’s going to change in a week just because of what this race means.”

David Coulthard, a 13-time grand prix winner for Williams and McLaren, feels Verstappen and Hamilton are looking to achieve the same end from subtly different means.

“With Max, if there’s a gap, he’s always going to go for it, but that’s not always the case with Lewis,” Coulthard says.

“Lewis is fantastic at close-quarters racing and avoiding incidents and accidents. He’s brilliant when it comes to that.”

Coulthard feels Hamilton’s decision not to avoid contact with Verstappen at Silverstone was a significant moment.

“I don’t believe that Lewis deliberately tried to take Max out – I believe he consciously decided ‘that’s enough, I’m not giving you any more space’,” he says.

“On that type of corner at that speed, there was only one trajectory Lewis was going to end up on. If you’re wheel-to-wheel as you turn into the corner, your car has downforce stolen from it and you’re going to drift further than the car on the outside.

“That’s just a racing fact. Lewis would have known that, he rolled the dice and the consequence of that was what happened.”

While both drivers have gone to great lengths to deflect questions of pressure throughout the season, the respective team principals, Christian Horner (Red Bull) and Toto Wolff (Mercedes) have spent much of 2021 sniping at one another. Horner’s description of Hamilton’s Silverstone manoeuvre as “unacceptable”, “dangerous” and “desperate” lit a fuse that has continued to smoulder since.

‘If anything there’s more pressure on Max and Red Bull than there is on Lewis and Mercedes, because they’re really in it – this is their chance.’

After Saudi Arabia, where Hamilton was forced to take avoiding action when trying to overtake Verstappen and later called the Dutchman a “f—— crazy guy” over the team radio, the Briton made it clear that he felt Verstappen’s conduct had crossed a line.

“I know that I can’t overtake someone and go off track and then keep the position … that’s well known between all us drivers, but it doesn’t apply to one of us, I guess,” he said.

Verstappen’s comment – “this sport these days is more about penalties than about racing” – only ramps up the tension ahead of Abu Dhabi, where Ricciardo feels that pressure – more than familiarity with title deciders – will be the key factor.

“I don’t see experience coming into it with Max and Lewis, and they’ve raced each other enough this year to know what’s got to be done,” he says.

“I don’t think Lewis has pressure on him because he’s got seven of them [world titles] and he’s done this before. He’s been there and knows what to expect, so it’s not new for him. Max is trying to get his first one and it’s been so rare for someone in this era to even challenge Mercedes. If anything there’s more pressure on Max and Red Bull than there is on Lewis and Mercedes because they’re really in it – this is their chance.”

Coulthard believes Hamilton sees shades of his early F1 tenure in Verstappen, after the Briton finished runner-up in his rookie season in 2007 as a 22-year-old for McLaren before winning his first title the following year.

“In many respects it’s like Lewis is looking in the mirror with Max,” Coulthard says.

“Max, given his age and given his life experience, is a bit of a phenomenon. He has maturity beyond his years, so I don’t see one getting the edge on the other when it comes to racing intelligence.

“There’s respect there, but they’re not going to be going on holiday together any time soon because they’re very different characters at different phases of their lives.″⁣

That Verstappen and Hamilton arrive in Abu Dhabi level on points – with Verstappen in the ascendancy by dint of one more race win – has raised the spectre of Verstappen electing to take matters into his hands to ensure both drivers don’t finish the race, as Schumacher infamously did with Hill in Adelaide in 1994 (and unsuccessfully with Villeneuve in Spain in 1997), and as Senna did with Prost in Japan in 1990.

While acknowledging the possibility, Coulthard doesn’t feel the title fight will end up in the trackside barriers.

“I don’t think it’s in the DNA of either of them to do something like that, to deliberately take the other off,” he says.

“Things are moving pretty quickly, but I think the racing will again be hard but with racing intent, rather than deliberate intent to take someone out.″⁣

As a rival with a front-row seat to the decider, Ricciardo hopes the title will be won on merit, and not with controversy.

“The teams, they’re getting pretty involved with one another and it’s clearly not just about the drivers now,” he laughs.

“I’d like to think they can leave the drivers to settle it on track and stay out of the politics.

“It’s been awesome the whole year, but I want it to get settled on track. Nobody wants this resolved in the stewards’ room.”