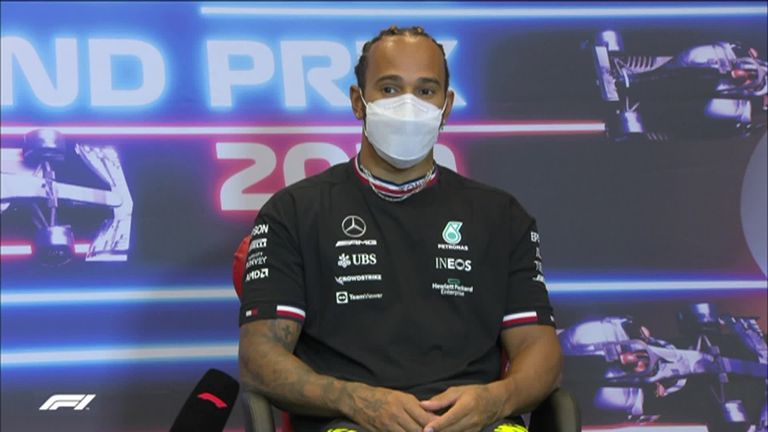 Lewis Hamilton has given his backing to the “incredibly brave” Naomi Osaka and taken aim at French Open organisers for fining her, as F1’s world champion said young sportspeople needed more support dealing with the media.

Ahead of the French Open, four-time Grand Slam champion Osaka said she would not speak to the press during the event to protect her mental health. She was fined $15,000 by organisers after not appearing in the press conference following her first-round win at Roland Garros last Sunday.

The 23-year-old subsequently withdrew from the tournament, explaining her reasons and revealing she had “suffered long bouts of depression” since winning her first Grand Slam title in 2018.

Mental health is not a joke, this is real and serious. This takes a lot of courage to do. Let's all make sure Naomi knows she's not alone. Today is a good day to check and ask your friends and loved ones how they are doing and let them know they are not alone. https://t.co/2ytC6k1hHd

Hamilton tweeted his support for the Japanese player earlier this week and, appearing in Thursday’s F1 press conference ahead of this weekend’s Azerbaijan GP, spoke powerfully about Osaka and his own experience of being a young sportsperson.

“She is an incredible athlete and human being, and her activism has been just so impactful,” said the 36-year-old Mercedes driver.

“At such a young age there is so much weight on her shoulders, it’s inevitable.

“I think she is incredibly brave and I applaud her for her bravery because I think it’s now asking those in power, putting them in question, and making them have to think about they react because I think the way they reacted was not good with the fine. “Someone talking about their personal mental health, and then being fined for it, definitely wasn’t cool. They could have definitely handled it better I’m sure and hope they take a deep dive into it and find a better way to navigate in future.

“As athletes, we are pushing ourselves to the limit, we are on the edge, and we’re only human beings.”

He added: “We are sorry and sad for Naomi Osaka. We wish her the best and the quickest possible recovery and we look forward to having her at our tournament next year.

“The grand slams, WTA, ATP and ITF, we remain very committed to all athletes’ well-being and to continually improving all aspects of their experience, including with the media, like we have always tried to do.”

Hamilton has experienced ups and downs with the media during his 14 years in F1 and said: “I have learnt the hard way and made many a mistake, and still do today.

“It can be daunting still standing behind a camera, it’s not the easiest, particularly if you’re an introvert and do struggle to be under those sorts of pressures.

“Some people are less comfortable with it than others. I’ve learnt over my time here and I’m trying to continue to learn how I engage but when I was young I was thrown into the pit and wasn’t given any guidance or support. What I do know is that when youngsters are coming in they are facing the same thing I did and I don’t necessarily know if that’s the best for them. “We need to be supporting more. It shouldn’t be a case where you are pressured. There are scenarios where, for example with Naomi’s scenario, she didn’t feel comfortable for her own personal health not to do something and the backlash is ridiculous.

“People not taking into account that she’s a human being and she’s saying that ‘I’m not well enough to do this right now’, that really needs to be looked into and how people react to that.”

“We live in an industry where people don’t necessarily take into account there is a human being behind the mic and that human being, whilst everyone has a job, that human being has feelings too and when they cry out for help we should not be penalising them for those sorts of things.”