Formula 1 – led by British drivers Lewis Hamilton, George Russell and Lando Norris – have held a minute’s silence ahead of the first free practice at the Italian Grand Prix, in remembrance of Queen Elizabeth II.

All drivers and race officials wore black armbands during the tribute to Her Majesty in the pitlane on Friday afternoon.

This weekend’s race meeting in Monza will continue as scheduled following the death of the Queen aged 96 on Thursday, but there was a moment of silence to pay tribute before Friday’s opening training session at 1pm UK time.

There is set to be another grid-based tribute before the start of Sunday’s race at 2pm, although details of this are still to be announced.

Seven-time F1 champion Hamilton, Russell and Norris took part in the tribute, alongside their compatriots from around the world.

F1 officials and the constructors also gathered in the pitlane at Monza to respect Britain’s longest serving monarch.

The death of the Queen on Thursday led to tributes from across the sporting world, as reported in Sportsmail, including from Formula 1. 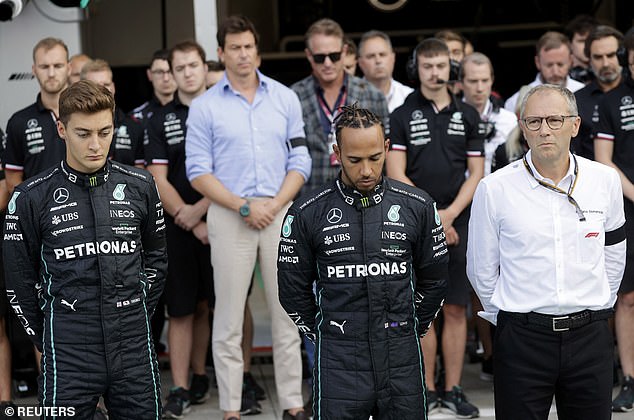 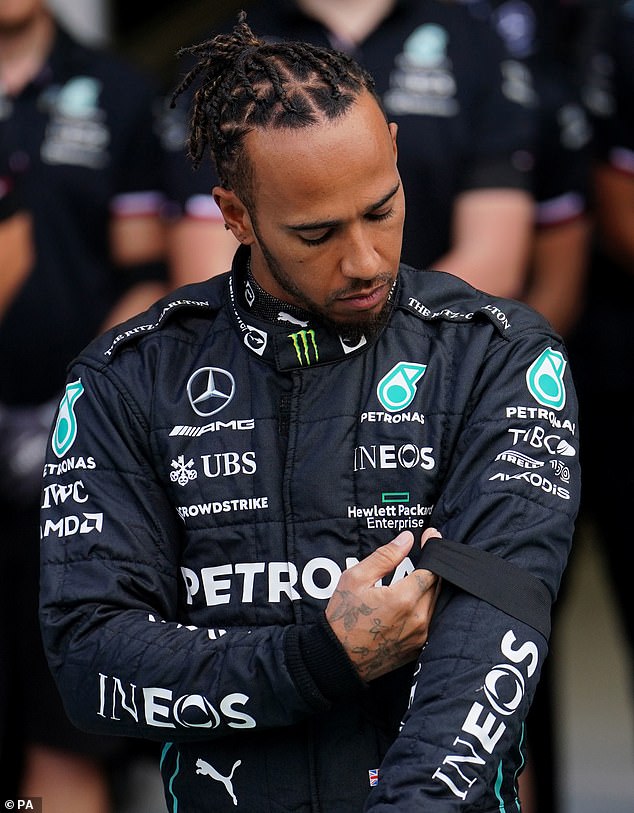 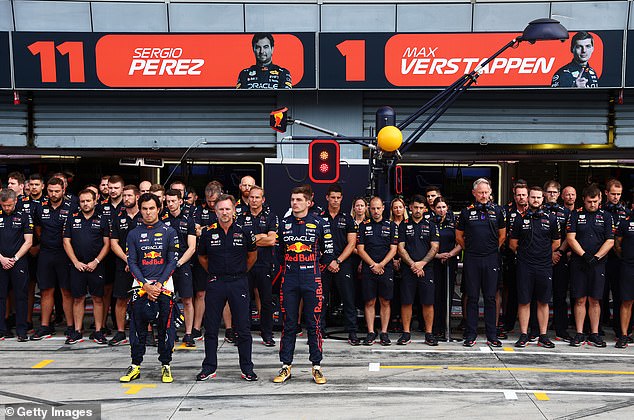 Sergio Perez, Christian Horner and Max Verstappen stand at the front of the Red Bull paddock 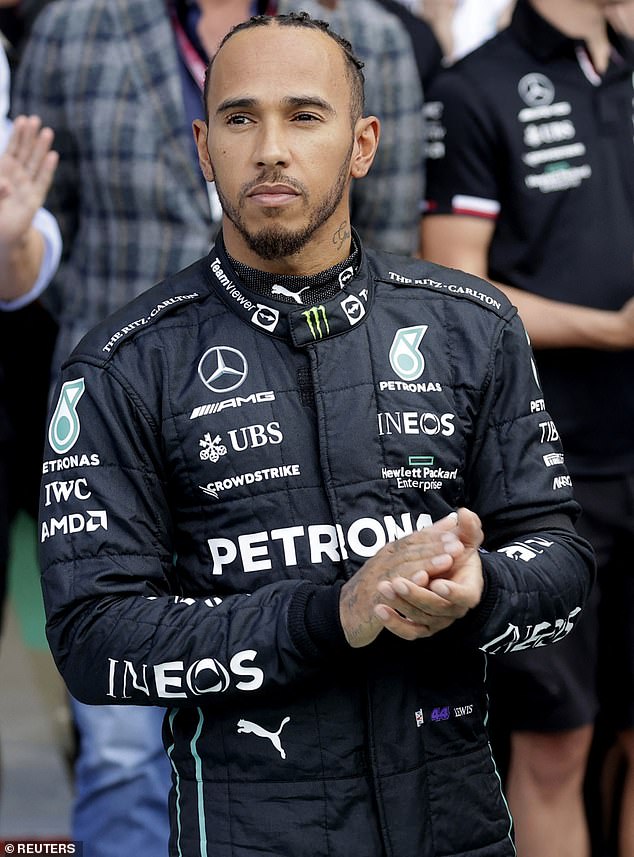 Hamilton posted an emotional tribute on Instagram, describing the Queen as an ‘iconic leader’ 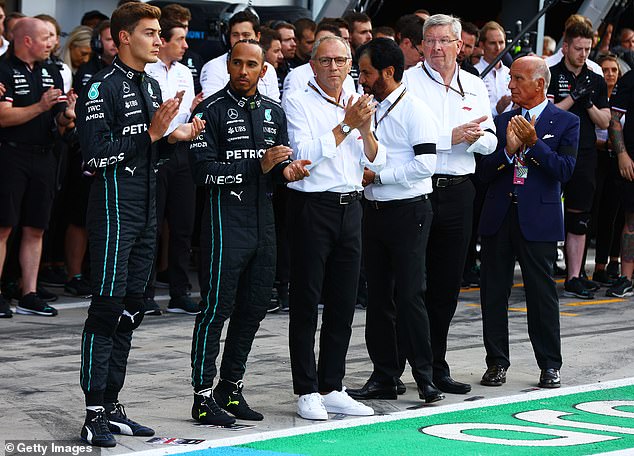 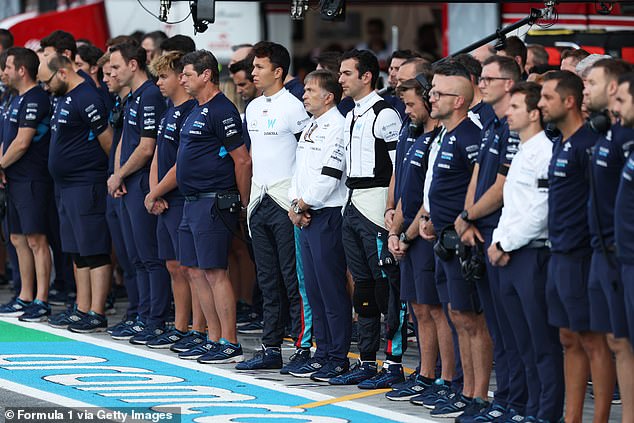 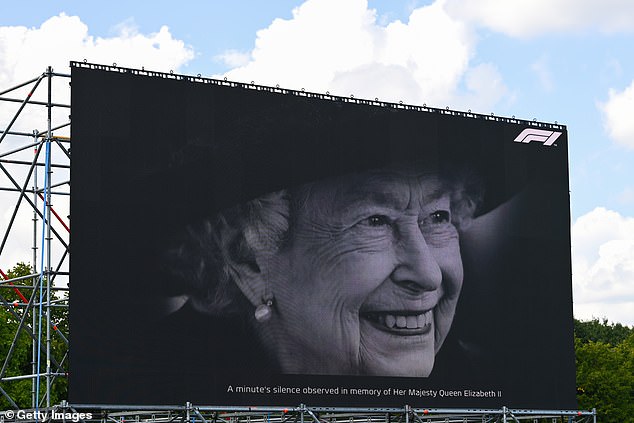 Queen Elizabeth II died peacefully at Balmoral, Aberdeenshire on Thursday at the age of 96

On Friday, Hamilton posted on Instagram: ‘How do you find the words to describe the loss of Her Majesty The Queen? She was truly an iconic leader, an inspiration and a reassuring presence for most, if not all, of our lives.

‘Since the sad news yesterday, I’ve been reflecting on her incredible life. She was a symbol of hope for so many and she served her country with dignity, dedication and kindness. She was truly like no other and I’m grateful to have lived during her time. Her legacy will be long-lasting and her passing deeply felt.

‘I had the incredible honour of being able to spend time with her. It is something I’ll never forget. We talked about our shared love of dogs and she was incredibly generous with her time. I know the whole nation and many others around the world will be mourning her loss and my thoughts and prayers are with her family and all those close to her, who have lost a loved one. Rest in Peace❤️’. 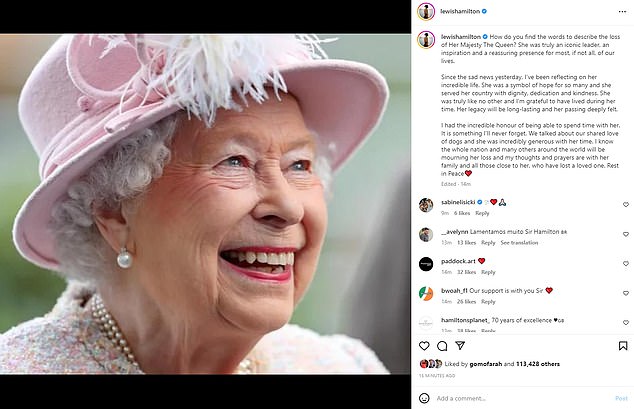 Lewis Hamilton paid tribute to the Queen on Instagram, and spoke of their mutual love of dogs

Russell tweeted: ‘I’m so sad to hear about the passing of Her Majesty Queen Elizabeth II.

‘Her devotion to our country and her gracious leadership were inspirational to so many generations of people in the UK and around the world.

‘My family and I send our deepest condolences to The Royal Family and to all those who admired her service to our country for seven decades. Rest in Peace.’ 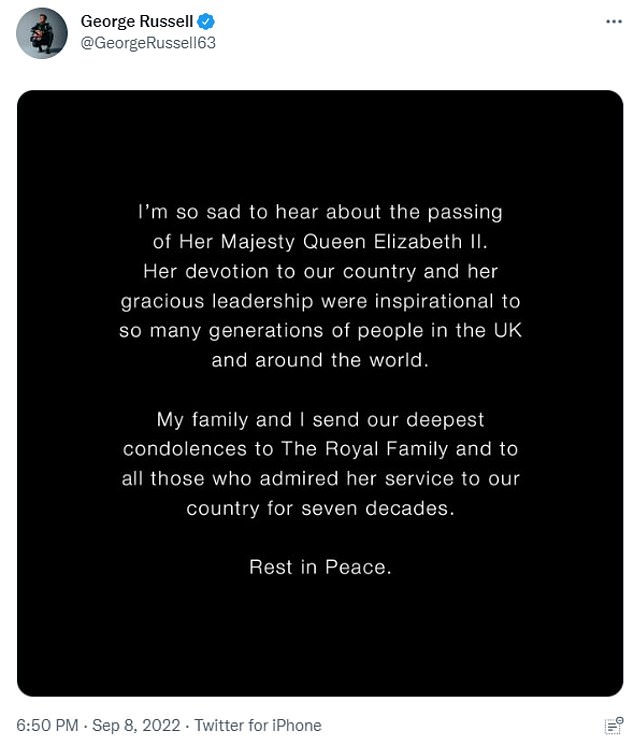 Stefano Domenicali, CEO of the sport, said: ‘Formula 1 mourns the passing of Her Majesty Queen Elizabeth II. For more than seven decades she dedicated her life to public service with dignity and devotion and inspired so many around the world.

‘Formula 1 sends its deepest condolences to the Royal Family and to the people of the United Kingdom and the Commonwealth.’

Ferrari hailed the ‘groundbreaking’ royal pioneer on Twitter, and offered its sympathies to the family, and to their British counterparts in the F1 paddock.

McLaren also paid their own tribute to the Queen, including an image of the day she opened the team’s Technology Centre in Woking.

The Royal Family has a long history of supporting Formula 1, with Elizabeth’s father King George VI attending the first British Grand Prix in 1950. 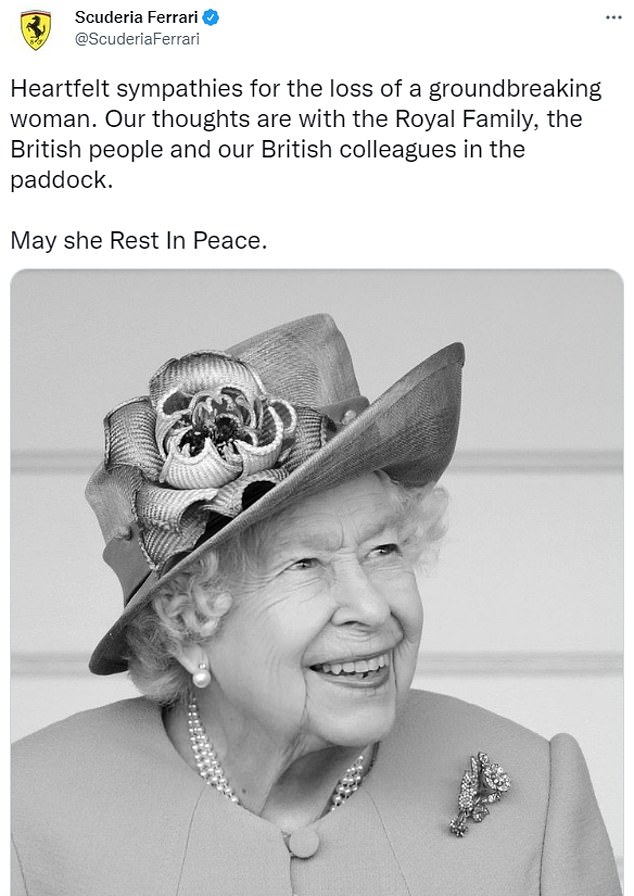 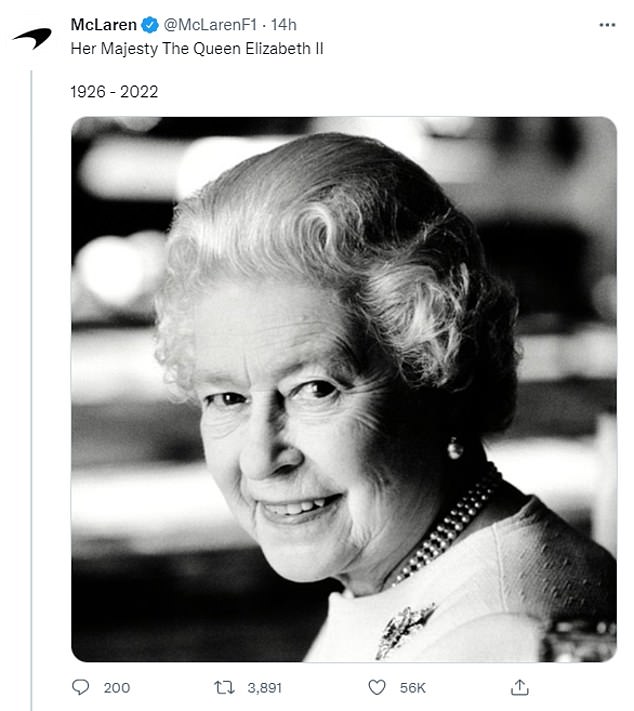 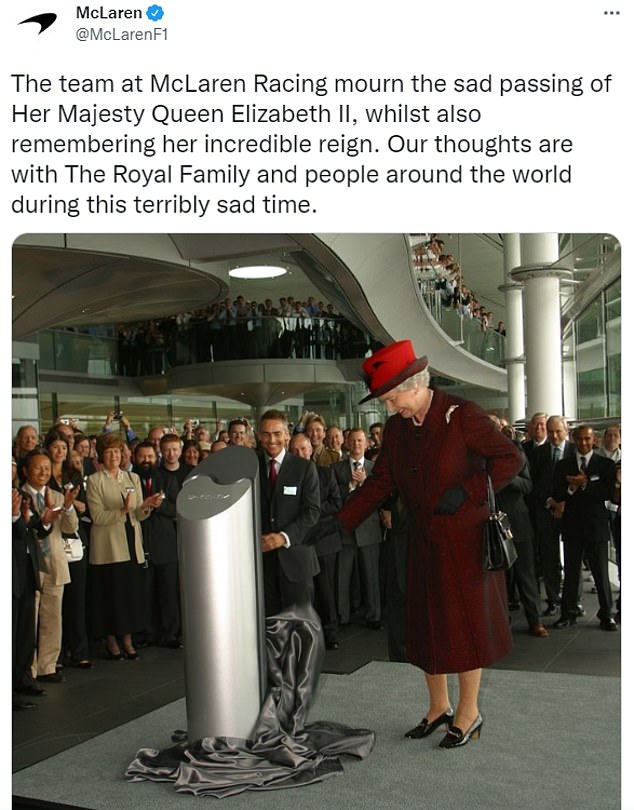 McLaren also mourned the passing of the Queen, and highlighted her role opening their centre