Lewis Hamilton has responded to the fierce social media backlash he has faced for sharing an anti-vaxxer post on Instagram that accused Bill Gates of lying about a coronavirus vaccine.

The 35-year-old shared a video originally posted by King Bach which featured a clip of Gates in an interview with CBSN.

Discussing the ongoing development of a COVID-19 vaccine, tech billionaire and co-founder of Microsoft Gates spoke out about fears over potential side effects during vaccine testing.

The video was captioned by content creator King Bach: “I remember when I told my first lie.” 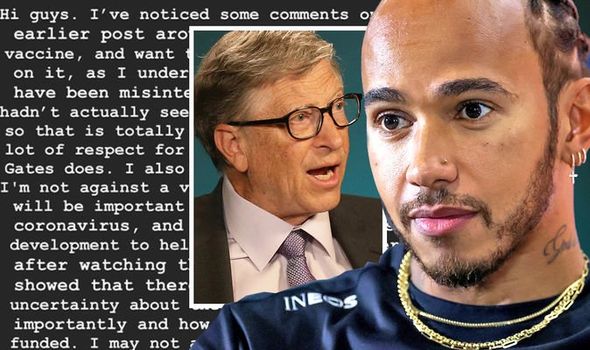 But the Formula One world champion has reacted to the criticism he has faced, insisting he did not spot the caption below the video and declaring that coronavirus vaccines have his support although he is concerned about potential side effects.

The deadly disease has claimed the lives of over half a million people worldwide and forced many countries into lockdown.

And despite his efforts to help aid global health, Gates has faced bizarre and baseless suggestions that he wants to use the vaccine to embed tracking chips into people.

Hamilton wrote on his story on Monday afternoon: “Hi guys. I’ve noticed some comments on my earlier post around the coronavirus vaccine and want to clarify my thoughts on it, as I understand why they might have been misinterpreted. 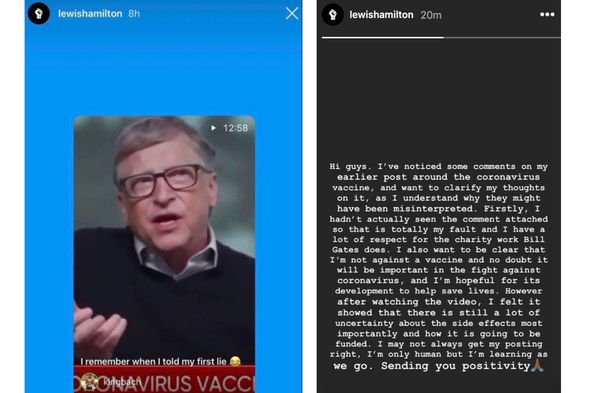 “Firstly, I hadn’t actually seen the comment attached so that is totally my fault and I have a lot of respect for the charity work Bill Gates does.

“I also want to be clear that I’m not against a vaccine and no doubt it will be important in the fight against coronavirus and I’m hopeful for its development to save lives.

“However after watching the video, I felt it showed there is still a lot of uncertainty about the side effects more importantly and how it is going to be funded.

“I may not always get my posting right. I’m only human but I’m learning as we go. Sending you positivity.”

In the video, Gates said: “No, there’s no connection between any of these vaccines and any tracking type thing at all, I don’t know where that came from.

“I don’t know. Dr [Anthony] Fauci and I are the two most mentioned, and some of these are deeply ironic.

“Like, our foundation is about reducing death and bringing equity to health.

“And yet the idea that we get accused of creating chips or the virus, I think we just need to get the truth out there.

“We need to explain our values so that people understand why we’re involved in this work and why we’re willing to put billions towards accelerating the progress. 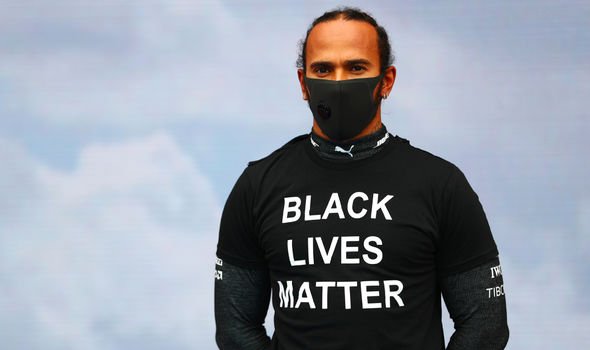 “It’s a little unclear to me, but I hope it will die down as people get the facts.”

Vaccines are being produced globally as the world combats COVID-19 to help people return to normal life and allow economies to fully reopen – though none are yet in circulation. Several are into the final stages of testing.

It has been claimed Gates is hopeful South Korean firm SK Bioscience, who he backed with nearly £3million in May, can produce 200m vaccine kits in the next 12 months.

Meanwhile, Hamilton will be back on track this weekend with F1 returning to the UK for the first of two races at Silverstone.

He heads into the first race of a British Grand Prix double-header five points ahead of Mercedes team-mate Valtteri Bottas after winning the last two Grands Prix.